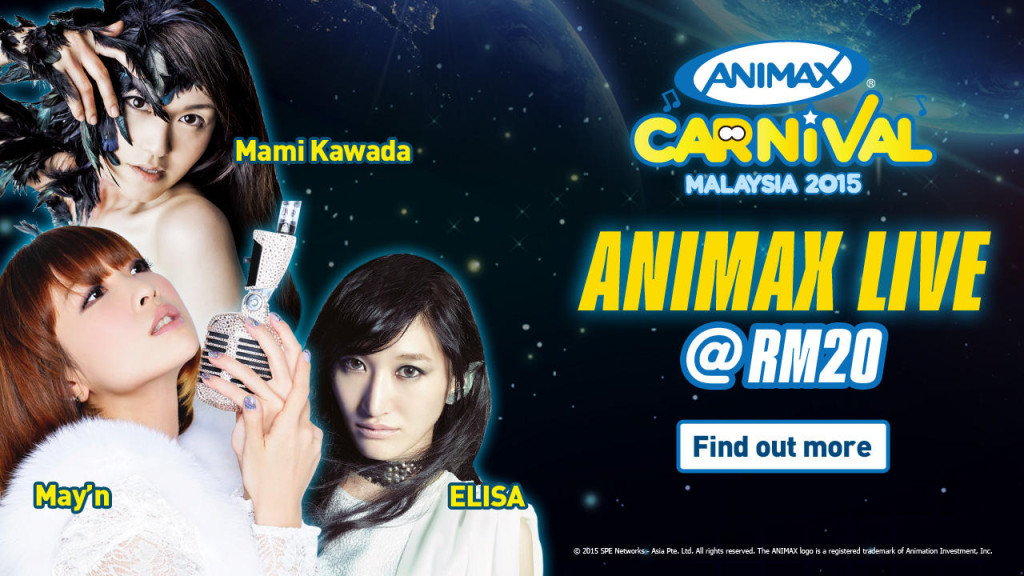 MALAYSIA, 16 March 2015 – Animax, Asia’s first channel specializing in Japanese animation will be bringing its annual flagship event, the Animax Carnival, back to Malaysia!  Viewers and fans will be treated to two days of fun-filled anime-themed activities at Sunway Convention Centre on 28 and 29 March 2015, 10am to 8pm.  The admission to the carnival is free.

Anime lovers can look forward to a bigger event this year with more exciting activities such as the sale of exclusive OO-Kun (the official channel mascot) merchandise and the inaugural Animax LIVE Concert that will feature three popular Japanese ani-song artistes – May’n, Mami Kawada and ELISA, performing in an engaging two-hour concert.

The concert, which will be held on 29 March 2015, 3pm at Sunway Convention Centre, will feature a spectacular performance from all three artistes.  Fans can look forward to them singing to familiar tunes from popular Animax titles such as The irregular magic highschool, VALVRAVE The Liberator, Tokyo Ravens, Accel World, Inari, Kon Kon, Koi Iroha, Hayate The Combat Butler.  Tickets to the concert will be at a special launch price of only RM20, and can be purchased through Ticketpro (www.ticketpro.com.my) starting 5 March 2015.

Animax Carnival Malaysia 2015 will see the return of the acclaimed Animax Cosplay Competition for cosplay lovers!  Cosplayers can once again showcase their costume-making talents and emulation of their favourite anime characters with a range of realistic costumes and gravity-defying anime hairstyles to thrill visitors.  This year, the competition will feature two categories, a solo category on 28 March, and a group category on 29 March, both happening at 10.30am to 12pm.

Participants will stand a chance to win cash and exciting prizes such as a Sony PlayStation 4, a Sony Compact Camera and Sony Hi-res Stereo Headphones worth more than US$1,000.

This year, Animax Carnival Malaysia will officially launch a series of merchandise of the cute and cuddly channel mascot OO-Kun, such as the official plush toy, luggage tag and water tumbler.

Fans will also be able to purchase a wide variety of exclusive and original anime merchandise from Animax favorites such as Fairy Tail and Hunter x Hunter at the carnival.

Another highlight of the event is the Carnival Game Zone, where visitors will get to try their hands on traditional Japanese-themed games and win prizes.  Fans will also witness their favourite anime scenes being brought to life through the Experience Zone and Anime Art Gallery.

“This is the fourth successive year we are holding Animax Carnival in Malaysia.  Through the years, we have witnessed the growth in the community and attendance of the event.  Just last year, we saw over 22,000 visitors from all over Malaysia, over a span of two days.  As a commitment to our viewers and anime lovers, we are excited to take the event in 2015 to a whole new level with the first-ever Animax LIVE Concert, at an affordable launch price of RM20.  We hope to continue to bring the hottest anime content to Malaysian viewers on television and beyond,” said Virginia Lim, Vice President, Asian Content, Networks, Asia, Sony Pictures Television.

ELISA is a Japanese female singer and model from Kanagawa Prefecture, Japan. She debuted as a singer in October 2007 with her first single “Euphoric Field,” which went on to become the opening theme song for the anime series Ef: A Tale of Memories. Not only is ELISA a very talented singer, she is also signed to Elite Model Management as a fashion model.

After going on hiatus in 2011, ELISA returns in 2013 under a new label, SME Records, with the single “Shout My Heart.” In April 2014, ELISA made her US performance debut in Seattle, Washington at Sakura-Con.

Mami Kawada is a Japanese pop singer who is signed to NBCUniversal Entertainment Japan. Her debut single, “Radiance,” which was released on 23rd February, 2005, was used as the opening theme for the anime Starship Operators. More impressively, her most successful single, “Joint,” which was released on 31st October, 2007, was used as the first opening theme for Shakugan no Shana II.

She is also a member of I’ve Sound, who is famous for providing the theme songs of highly successful anime series such as Shakugan no Shana and Hayate the Combat Butler. More recently, Mami Kawada performed the second opening theme of the third installment of Shakugan no Shana  which is called “Serment.” It was released as a single on 1st February, 2012.

May’n (May Nakabayashi) is a Japanese J-Pop artist managed by Horipro talent agency and under the Victor Entertainment label. She was formerly under the Universal Music label.

In 2003, at the age of 13, she participated in the 28th “HoriPro – Talent Scout Caravan – Love Music – Audition” and, out of the 34,911 hopefuls, became one of the four who survived the final eliminations at the Shibuya Club Quattro.

In 2005, she made her single debut with Crazy Crazy Crazy. The single was later re-released with an extra track. Her second single, Sympathy, was also released later that year.

In 2006, she sang the ending theme for the anime Love Get Chu ~Miracle Voice Actress Hakusho~ which was included on her third single Fallin’ in or Not.

In January 2008 she changed her artist name to “May’n”. In the same year, she performed as the singing voice of the character Sheryl Nome in the anime TV series Macross Frontier. She released two singles that same year, each placing in the Top 3 on the Oricon Weekly Chart in their debut week. In January 2009, the mini-album May’n Street was released, and it reached number 2 on the Oricon Weekly Chart in the first week.