Be prepared feed your eye by the turnout of local celebrities and beautiful women at the Malaysian premiere screening of Andy Lau’s latest action-adventure SWITCH. In conjunction with release of SWITCH on 13th June, movie distributor RAM Entertainment will be holding a premiere screening a day before the general release in collaboration with beauty and wellness specialist and partner Mary Chia, where the main event not to be missed is the <<Switch Up Your Look>> contest, a contest designed for the public to be able to switch up and improve oneself. 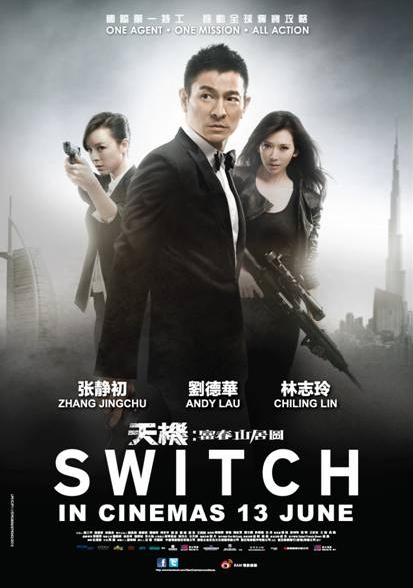 All the ladies across Malaysia, this is your chance to embark on a journey to become a better version of yourself! This competition will offer successful finalists a beauty make over, as well as a chance to attend the film’s premiere screening alongside local celebrities and models, with the winners having a chance to win over RM 20,000 worth of cash and prizes! Such an exquisite one upon a lifetime chance to make a difference that should not be missed! For more information regarding the contest, please head over to RAM Entertainment’s website (www.ram-ent.com.my), Facebook RAM Entertainment (RAM Movies), RAM’s blog (RAM Entertainment).

Lucky guest and winners that are attending the SWITCH Malaysia Premiere Screening will be among the first to vote for their favourite finalist on the night of the premiere. Guest during the premiere who cast their vote  will receive a Mary Chia eye care voucher. All they have to do is fill in their personal info and vote for their favourite contestant, and place the card into a lucky draw box for additional chances to win fabulous prizes!

From Dubai to Milan to Tokyo – this globe-trotting spy action SWITCH revolves around a priceless Chinese painting <<Fuchun Mountains>> which in the movie will be on exhibition to the public for the first time attracting the attention of Japanese Yakuza and a master thief from England. Top Chinese agent (Andy Lau), is given the mission to protect the painting. With so many different parties vying for to be the painting’s new owner and appearance of the mysterious Lisa (Lin Chiling) the race is on to see who will prevail in the end, worthy to be the new owner of the priceless artifact.

In the world of SWITCH, Andy Lau and Lin Chiling are acting as the two main leads and special attention are given to their wardrobe to enhance their characters.  Andy Lau’s role in the movie is that of an international agent, thus he will be  dressed in a variety of costumes such as a white tuxedo, bullet proof vest, special police wear and others, each appropriately fitted for different situations in the movie. For Lin Chiling, her costumes are even more elaborate – ranging from a nurse outfit, flight attendant, call girl and so on giving her a multiple personalities and identities that leave the audience guessing on her ‘true’ character. The movie received strong support from the Dubai Tourism, with many of the city’s landmarks, including the 7-star Burj Al Arab Hotel open for the first time to filming a movie.

All the elements in SWITCH has been crafted to reflect the international agent on a global mission in high social events after a treasured art. Even the up tempo rock SWITCH theme song by Magic Power and Mayday’s lead vocal Ashin Chen, with fantastic piano contribution by Yen-J channels the vibrant of the movie. The theme song has been air played heavy on MYFM and the music video broadcast via numerous media channels – viral and TV stations. The lyrics and melody of the theme song bring you into the world like in the movie where the lead characters; handsome secret agents, beautiful agents with a sense of charm, courage and a strong adrenaline rush!

SWITCH will be released in 3D in China, but Malaysia will only release the 2D version in over 60 theaters across the country. Rest assured that the 2D version is in no way inferior than the 3D version!

SWITCH movie is supported by Official Drink DRINHO and Official Promotional Partner Mary Chia; together with other partners including Schwarzkopf, Travel For All, MYFM and Melodyfm. Special thanks to Steven Goh Photography, Yes Academy, Raffles Design, JCY Modelling, Pocotee& friends, Safetree, Newwebpick and LoveWeddingZine for the support towards the SWITCH Up Your Look Contest.