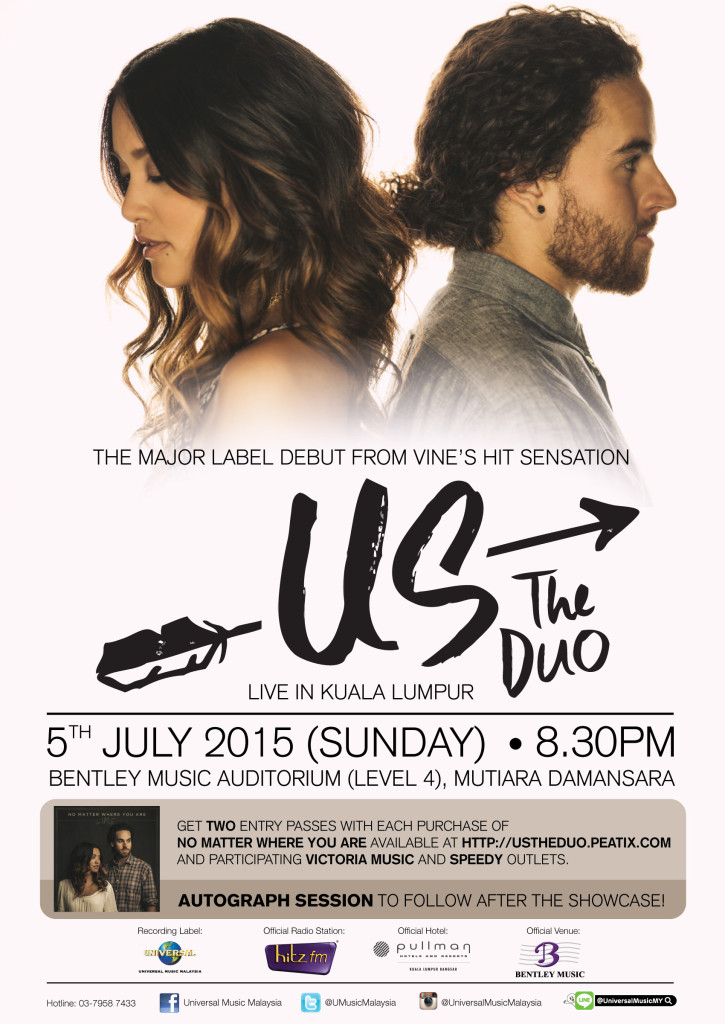 Universal Music Malaysia proudly presents the major label debut from Vine’s hit sensation – Us The Duo Live in Kuala Lumpur! The lovely duo will be performing in Malaysia on 5 July 2015 (Sunday) at Bentley Music Auditorium. This showcase will mark the duo’s first ever appearance in Malaysia!
Purchase their debut album No Matter Where You Are to get a pair of tickets to the showcase, and bring along the album to get it autographed by the duo after the show. The album is priced at RM48.90 and will be available for purchase at participating Speedy & Victoria Music Retail Outlets. Online album purchase for the same price is also available from 17 June 2015 onwards through the following website: http://ustheduo.peatix.com . For more information, please call Universal Music Malaysia at 03-79587433.

4 years ago, two emerging solo artists from opposite sides of the country randomly collided, fell in love, and combined their talents to form Us The Duo. A few successful YouTube videos (23+ million views) later encouraged these 2 songwriters to write their own music together, leading them to produce their first self-titled album, Us. After their debut album release, Michael & Carissa Alvarado got married and have been traveling and playing music together ever since. These two have gained quick exposure in the last five months.

They also gain a substantial amount of prominence by recording 6-second covers (or #6SecondCovers) to their Vine account. View the vine video @UsTheDuo. In 2014, they released their 2nd album, No Matter Where You Are, which peaked at #22 on the iTunes Pop Charts, and #19 on Billboard’s Heatseekers Chart. The first single from the album also titled “No Matter Where You Are” was featured twice in the Fox Animated Feature “The Book Of Life” and is inspired by their real life romance. The duo are also very active in the social media landscape with 3 million followers on Facebook, 477k followers on Instagram, 163k followers on Twitter & 59 million view on Youtube.