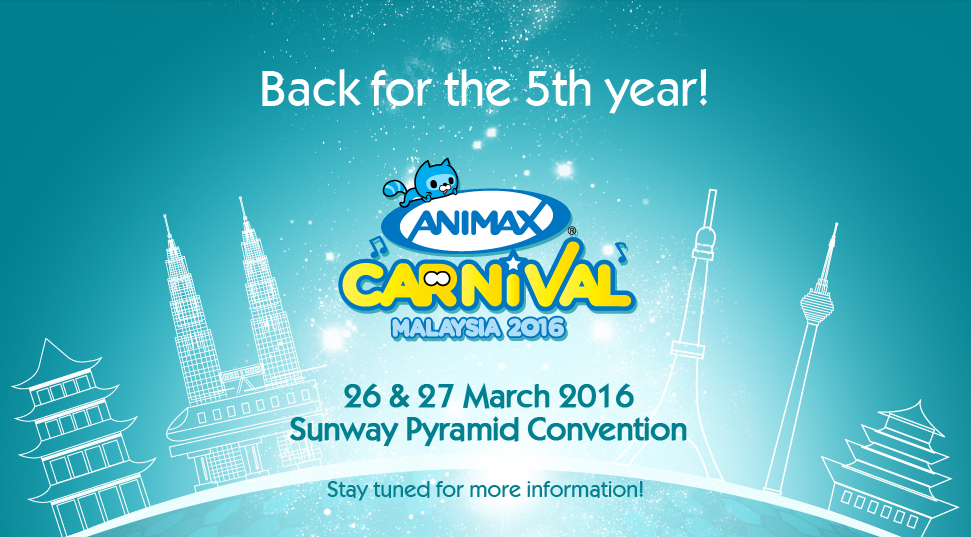 Get set to be electrified, as Malaysia’s most exciting and anticipated anime and Japanese pop culture convention – Animax Carnival Malaysia 2016 is back!  Organized by Asia’s top anime channel, Animax (Astro Channel 715), the carnival is set to bring local fans a slice of authentic Japanese culture for free with two days of anime-themed activities, held at Sunway Pyramid Convention Centre Hall 2 & 3 on 26 and 27 March 2016 from 10am to 6pm daily.

Following a smashing success of more than 25,000 visitors during last year’s carnival, Animax is set to make this year’s carnival extravaganza even bigger and wilder with more thrills and excitement. Animax Carnival 2016 will feature free live performances from three renowned ani-song artistes: angela, GARNiDELiA & yanaginagi.  Fans will be able to catch them perform hits from popular anime series and get up-close and personal with them during the fan meetings.

To get into the groove of these powerhouses’ amazing performance before the real deal, tune in to Animax (Astro Channel 715) during the date and time featured below:-

The search for Malaysia’s best cosplayer continues with the return of the annual Animax Cosplay Competition. Like past years, Animax will set the stage for cosplay aficionados from all across Malaysia to showcase their costume-making talents and emulation of their favourite anime characters. Participants will stand a chance to win exciting prizes such as Sony XperiaTM Z5 and Sony PlayStation® 4.

The Animax Cosplay Competition will be held on 26 March 2016, 1pm at the carnival.  Below are the registration details for the competition:

FUN-FILLED CARNIVAL ACTIVITIES FOR EVERYONE!

Since the introduction of the cute and bubbly channel mascot OO-Kun, he has captured the hearts of many fans with his funny antics in the animated sketches.  This year, Animax will be launching an all-new series of sketches featuring their lovable mascot and is giving fans the opportunity to be involved in his latest adventure.  Fans can vote for their favourite scenes, characters and props; the most popular choices will be included in the next animated sketch which will be released at a later date.

Popular merchandise of OO-Kun such as water bottles, soft toys, folders and a new 2-in-1 cushion-blanket will also be made available for purchase exclusively during the carnival.  Fans who purchase over RM100 will even receive an additional customizable OO-Kun tote bag worth RM20!

Also going on sale at the carnival is original anime merchandise from Animax favourites such as Fairy Tail, Black Bullet, One Punch Man and Assassination Classroom.  All visitors will also receive an exclusive OO-Kun Flipbook Animation Notepad as a door gift!

Discover your inner hero at the Animax Academy

This year’s theme for the carnival games is ‘Animax Academy’, consisting of myriad activity booths that will put visitors’ strength, dexterity and intelligence to the test!  To graduate from the academy, visitors will have to complete all the challenges and exchange their score cards for exciting prizes!

Step into the world of your favourite anime

Anime lovers will also get the opportunity to step into the worlds of their favouite shows through the experiential zones inspired by two of Animax’s blockbusters: One Punch Man & The File of Young Kindaichi R.

Based off everyone’s new favourite superhero, fans and hero-wannabes alike are invited to test their might and pit their best punch against One Punch Man’s signature punch.  Through the interactive punching game, visitors will get to discover if they too have the ability to beat the strongest foes with only ONE punch.

Known for his impeccable ability to solve even the most impossible of murders, young Kindaichi is once again needed to solve his next great mystery at the carnival.  Fans can get a first-hand experience to solve a perplexing and gripping mystery as they play the role of Kindaichi’s trusted sidekick in this.

Animax Carnival Malaysia 2016 is organized by Animax.  Animax is available in Malaysia through Astro Channel 715; viewers can also catch the latest Japanese anime series at their own convenience via Astro’s video on demand service Astro Plus.