(SUKAN) A WISH COME TRUE FOR XPAX CUSTOMER WHO WINS AN ALL-EXPENSES-PAID TRIP WORTH RM50,000 TO THE BIGGEST SPORTING GAME OF THE YEAR 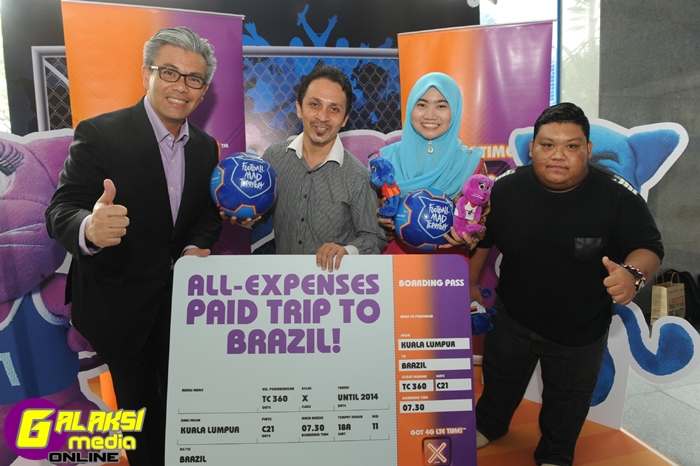 A Brazilian fan, Che Mohamad Hamiru was over the moon when he found out about the win from his wife, Wan Normaisarah binti Wan Harun, 23, who will be accompanying him on the trip of a lifetime to Brazil.

“My wife received a phone call, informing her that I was the Grand Prize winner. I could not believe it at first but was thrilled when I found out that the win was real. This will be my first time watching a football match live overseas and it is definitely a dream come
true. I can’t even imagine how exciting the final match would be.

“Both of us are looking forward to the trip and we have even learned the public transportation system there and a little bit of Portuguese as part of our preparation,” said Che Mohamad Hamiru, who hails from Tanah Merah, Kelantan.

Che Mohamad Hamiru and his wife will be in Rio de Janeiro, Brazil from 11 July to 17 July 2014 for the game. Held from 19 February until 4 May 2014, the nationwide promotional campaign also offered winners exciting weekly prizes worth up to RM15,000. Fifty customers who performed two credit transfers per week during the campaign period each won
themselves RM10 free credit from Xpax while another 50 customers who transferred their credit thrice weekly each won RM30 free credit from Xpax.

Annie binti Benjamin, Nor Amirah Izzati binti Mokhtar, Mazri bin Dawi and Norshafiqah binti Nordin each brought home a Samsung Galaxy Note 8.0 after performing four credit transfers per week during the promAotional period. Meanwhile, Cik Wan Kamariah binti Mat Jusoh, Nurul Aswani binti Musa, Ahmad Shamim bin Che Abd Rashek and Sorpi bin Bujang who each transferred five credits per week, walked away with a brand new Samsung Note 3.
Che Mohamad Hamiru won himself the Grand Prize after performing a minimum of five credit transfers per week during the campaign period. Afizulazha Abdullah, Chief Digital Services Officer of Celcom Axiata Berhad, said, “With our credit transfer service, Xpax customers will be able to transfer credit quickly, conveniently and easily to their family and friends within the same network. We are delighted to have organised this campaign which has received a positive response
from our customers.

“The campaign not only brought our customers closer to their loved ones but also allowed us to fulfil one person’s dream of experiencing the final match of the biggest sporting game of the year, live in Brazil,” Afizulazha added.
Through this service, customers can transfer up to RM25 with a minimum of RM1 in one transaction. Customers simply need to type “RM<amount>” and send the SMS to “1<recipient’s prepaid number>” in ONE easy step. RM0.50 will be charged to customers for every successful transfer.

The service also allows customers to request for credit from their friends or family, register favourite numbers, and even schedule credit transfers on a weekly or monthly basis.