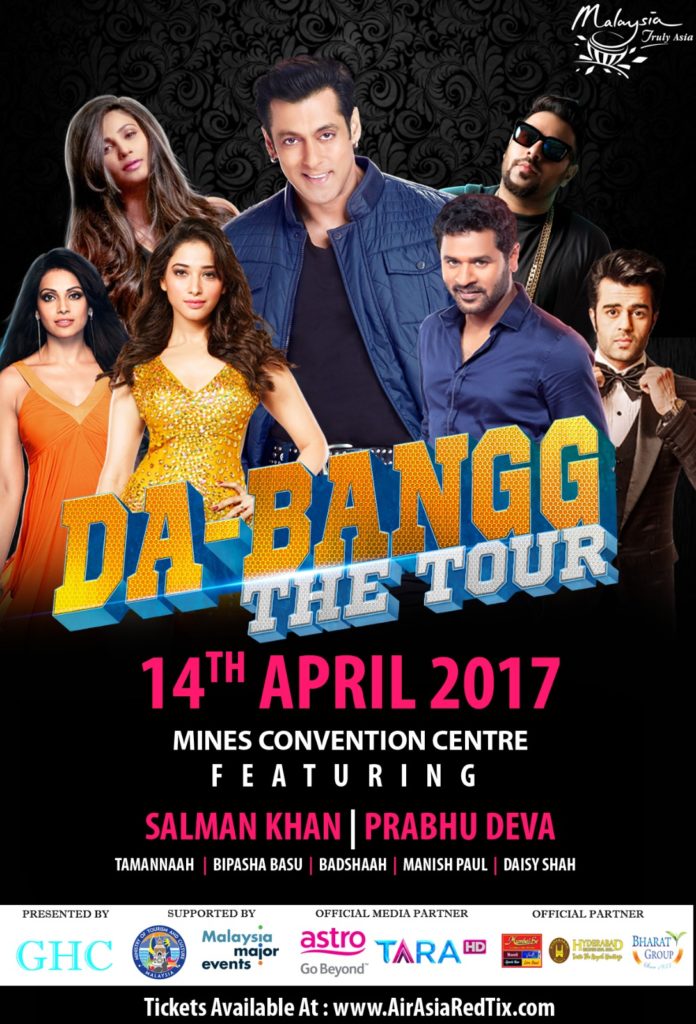 Da Bangg the Tour 2017 is a tour of Salman Khan and team, performing live in Kuala Lumpur on 14th April 2017 at Mines International Exhibition & Convention Centre. Starting from Kuala Lumpur, Malaysia to Hong Kong, Auckland, Sydney and ends in Melbourne to complete the full tour on April.
Supported by Malaysia Major Events (MME), a division of Malaysia Convention & Exhibition Bureau (MyCEB), an agency under the Ministry of Tourism and Culture Malaysia, the tour is specially held as a dedication to their fans, known as Da Bangg, for their immense love and support throughout the decade.
The Bollywood fever has swept the nation and DA BANGG THE TOUR 2017 – LIVE IN MALAYSIA is expected to meet the growing need of Bollywood fans around the region and beyond. The concert is expected to attract neighboring fans to participate and treat themselves not only to the entertainment presented but also to the various tourism attractions that Malaysia has to offer. The hosting of this concert will further emphasize the government’s ongoing effort to strengthen its global appeal as a leading Asian destination for major live entertainment performances.

Celebrating 60th years of Malaysia Independence, GHC proudly bringing the Biggest Bollywood concert in Malaysia. Compiling North and South Indian current biggest star, Prabhu Deva who will not leave your gaze out of his dance moves, Tamannah who will make the attendees stunned, Bipasha Basu who will haunt your heart forever, Badshah who will make you moves to his beats, Manish Paul to make you laugh and Daisy Shah who brings color to the concert.

Malaysia is the gate opening of this tour in Asia and is set to unlock insights on the show to following cities. Prior to this announcement of the tour, they had completed 2 almost sold out shows across different cities.

Furthermore, this will be the first time for Salman Khan to perform Live in Malaysia. Targeting full pledge Malay and Indian community in Malaysia and whole other neighborhood countries, bringing bright impact in Tourism sector. Knowing Salman Khan hold the highest rank in movie collection history in the whole wide world (especially the Bajrangi Bhajan – which is the enter zone to melt the fans in Pakistan), he managed to pull ticket purchasers from Pakistan, Maldives, Singapore, Indonesia and many other countries.

A fully charitable brand of Salman Khan – Being Human Foundation, working in the areas of education and healthcare for the underprivileged, to be expose through Da Bang the Tour 2017 Malaysia concert. Not only education and healthcare, there also a career development center under
this program which provide training courses designed to meet entry level job requirement of the organized sector. Certain allocation will be given to the registered charitable trust.

Tickets to Da Bangg the Tour 2017 – Salman Khan Live in Malaysia are purchasable via RedTix online at www.AirAsiaRedtix.com. Alternatively, visit their participating outlets such as Rock Corner and Victoria Music Station.