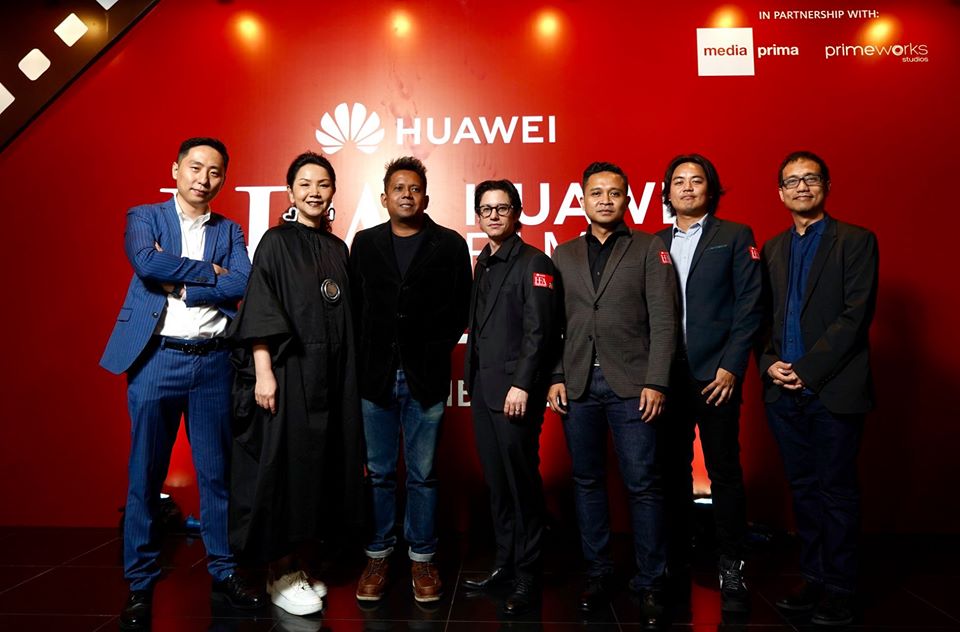 Kuala Lumpur, 18 December 2019 – HUAWEI Malaysia today, announced its inaugural HUAWEI Film Awards in Malaysia, a partnership with Media Prima Berhad and Primeworks. The film awards is aimed to encourage and inspire a new age of professional filmmakers and content creators to flex their creativity through stories filmed using HUAWEI smartphones.

Smartphone cinematography has changed the way filmmakers produce film nowadays, as it is convenient and cost-saving in the long run without the need to carry multiple filming equipment to get that high-quality videography shots. It is truly an exciting time where anyone can start exploring filmmaking without being held back by the lack of quality equipment or experience.

“We at HUAWEI strongly believe through HUAWEI Film Awards, we will path the way for film makers, content creator and film directors to flex their creativity through the stories filmed using the HUAWEI Mate 30 Pro. We also hope that the HUAWEI Film Awards will be a platform to enhance collaboration between local film makers, content creators and talents, encouraging them to share new filming knowledge, showcase smartphone-cinematography skills, and gain recognition at national and regional levels,” said Mr Alex Lin, President of HUAWEI APAC Consumer Business Group.

The HUAWEI Film Awards was officially launched in Malaysia with a screening of short films directed by five celebrated Malaysian filmmakers and content creators chosen in collaboration with Media Prima Berhad and Primeworks to produce a short film with the theme of “Empowering Your Possibilities”. The filmmakers are Jess Teong, Tuan Faisal, Nik Amir, Kroll Azry and Gavin Yap, who each produced a short film shot only with the HUAWEI Mate 30 Pro, showcasing the capabilities of smartphone cinematography advancement.

From the ability to capture up to 7,680 frames per second, which is 8x the offering of an average smartphone video recorders to the super large 1/1.54 inch sensor that ensures sufficient light in any condition, the HUAWEI Mate 30 Pro 4k SuperSensing Cine Camera enables filmmakers to convey some of the most visually-stunning stories of our generation, all through smartphone filmography. The thematic message is also to encourage future filmmakers and content creators to explore artistic and creative possibilities in telling great stories through the lens of a smartphone.

“The world of movies and films are always facing constant change and upheaval. When once the public can only see their favourite movies on the silver screen, now they can see movies on their smartphones. However, no matter what change the industry is facing, one ingredient is still the same, good storytelling. And good storytelling can come from anywhere. With this HUAWEI Film Awards, we are excited to uncover new storytellers that will ignite the industry and set the stage for the new cinema for the future” Datuk Ahmad Izham Omar CEO of Primeworks Studios Sdn Bhd.

With the goal to uncover and support local talent in smartphone film production, the HUAWEI Film Awards is an Asia Pacific festival with entries opened to participation from Malaysia, Singapore, Thailand, Indonesia and the Philippines.

“The HUAWEI Film Awards is an Asia Pacific festival dedicated to celebrating work shot on any Huawei smartphones, with the goal of uncovering and supporting the talents of tomorrow. The festival aims to nurture the interest of local creative talents in smartphone film production by expanding their scope and freedom to create breath-taking films, thus providing them an entryway into the world of smartphone filmmaking,” added Lin.

The HUAWEI Film Awards in Malaysia is now open for entries for all budding smartphone-filmmakers and content creators to submit their completed short film entries until 11:59pm on 25 February 2020 to this official link < https://consumer.huawei.com/my/campaign/film-awards/submission/>. Submissions must be filmed entirely on a HUAWEI smartphone with running time within <5-10> minutes for long form videos following the theme of ‘Empowering Your Possibilities’ or less than < 5 > minutes for short form videos of any storytelling that you desire. The winners of HUAWEI Film Awards will be announced on 6 March 2020.

For further information regarding HUAWEI Film Awards, including Terms and Conditions, and how to participate, visit the official HUAWEI Film Awards website at: https://consumer.huawei.com/my/campaign/film-awards/