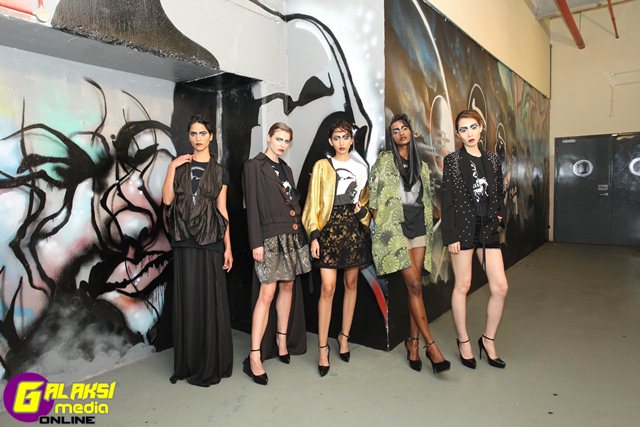 Kuala Lumpur, 25th November 2016 – In conjunction with the upcoming Rogue One: A Star Wars Story, Golden Screen Cinemas Sdn Bhd (GSC) hosted a fashion show, aptly themed Rogue Vogue, at GSC Mid Valley Megamall to unveil its limited edition Star Wars t-shirts, which are specially designed for a charitable cause in support of the children from Persatuan Kebajikan Kanak-Kanak Cornerstone.

The t-shirts are conceptualised from the Star Wars graffiti art found in GSC Mid Valley Megamall, painted by local street artist Mahathir Masri, more fondly known as THEY.  He has recently coloured the walls in the cinema with characters of his favourite movies, such as Star Wars, Fast and Furious and Marvel superhero movies, infusing his own graffiti style in the process.  That resulted in a combination that represents a distinctive part of the pop culture art movement in Malaysia.

To add on to the excitement of the Rogue Vogue fashion show, GSC engaged four local fashion designers – Calvin Thoo, Jimmy Lim, Nerd Unit and Stoned & Co. – to create 28 unique interpretations of the two t-shirts, which exudes the individual charms of the designers.  Some of the designs are available for viewing at GSC Mid Valley Megamall until 16 December 2016.

Star Wars fans can join GSC and be part of the force for a charitable cause when they purchase the special e-combo that costs RM38.90 via the GSC Mobile App.  Each e-combo comes with a regular popcorn-and-soft drink set and a special edition t-shirt, available in either black or white.  Proceeds go to Persatuan Kebajikan Kanak-Kanak Cornerstone, a children’s home in Semenyih, to help cover their monthly operating expenses. The e-combo will be available from 28 November 2016.

GSC is thrilled to bring graffiti into cinemas as it completes the audience’s visual experience, which doesn’t stop right after the movie credits roll.  The largest cinema chain in Malaysia is even more excited when the graffiti artwork has gone from walls onto t-shirts in conjunction with Rogue One: A Star Wars Story, which opens in cinemas on 15 December.

GSC is working closely with more homegrown talented street and graffiti artists to deck the walls at other GSC locations with more movie-related art.  Movie-goers will soon be able to spot these exciting graffiti works in GSC IOI City Mall and GSC Ipoh Parade among others, as GSC brings graffiti into their cinemas nationwide.