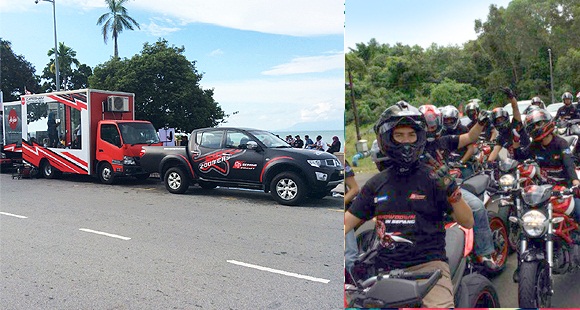 Sepang International Circuit (SIC)’s roving F1™ promotion team, the SIC Zoomers are now going all out in overdrive mode in the Klang Valley, as the countdown to the 2015 Formula 1 PETRONAS Malaysia Grand Prix™ on 27 to 29 March 2015 begins in full swing – with less than 2 weeks to go.

This year, the SIC Zoomers roadshow features replicas of two Mercedes AMG F1™ team cars from 2012 and 2013. Fans can check out the cars from the team that just won the F1™ Australia Grand Prix up close like never before and take souvenir photographs. The SIC Zoomers offer interactive engagement, with many fun games that feature exciting prizes and even free race tickets up for grabs.

“As we move into the final phase of promotions, members of the public should not waste any time in enjoying the last opportunity to meet up with our SIC Zoomers. Only from them can you purchase F1™ Malaysia Grand Prix tickets for as low as 50% off, so don’t miss the chance to enjoy incredible value! Make sure to follow SIC’s Facebook updates to keep track of where the SIC Zoomers are heading. You may stand a chance of winning exciting prizes and even free tickets to the race,” said SIC Chief Executive Officer Dato’ Razlan Razali. He added that the 50% discount is applicable to all tickets sold by the SIC Zoomers, except for Hillstand tickets, while also reminding fans to be early, as the SIC Zoomers may run out of tickets.

As F1 and Kpop fans alike were recently thrilled with the news that Girls’ Generation and SHINee – two of South Korea’s hottest pop groups will be performing at the post-race concert for this year F1 Malaysia Grand Prix on 29 March 2015, each ticket will offer better value than ever! With tickets starting from RM80, it will be an unforgettable experience for all visitors – enjoying the family-themed F1 Carnival during race weekend, experiencing the thrills of the race and followed by the excitement of Girls’ Generation and SHINee’s performance.

The F1 tickets can be purchased: