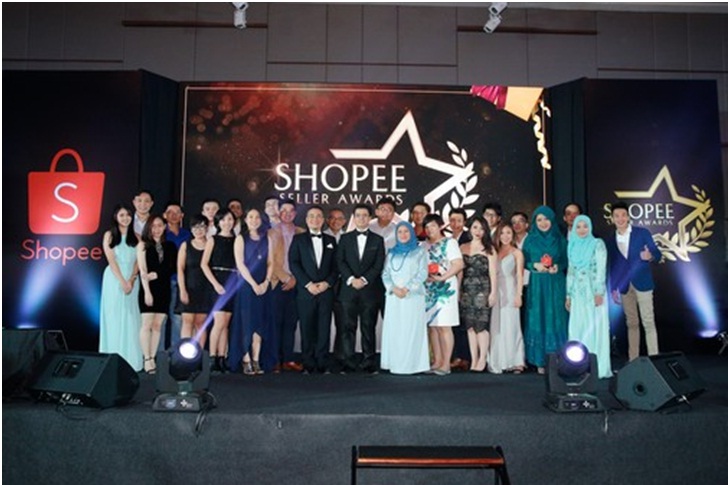 Te moved to Malaysia from Medan, Indonesia in 2003 in hope to build her career to provide a better life for her family. In 2009, she established her own wholesale business using mainly Facebook to market her products until she registered with Shopee in late 2015. Since then, she has garnered close to RM750,000.00 in revenue selling children’s clothes and toys.

The event was held to recognize and reward Shopee sellers who have shown tremendous business track records selling their products on the platform. It is also part of Shopee’s appreciation for their loyalty since coming on board since its official launch on 1 December 2015. As of March 2017, Shopee has recorded an annualized Gross Merchandise Value (GMV) of USD2.5 billion regionally with more than 30 million installs in 7 countries, with Malaysia contributing to 2 million of the number. With more than 100 million product listings across the region, Shopee has become a favourite marketplace for consumers.

“Shopee is the fastest growing platform in the region. But we would not have had such astonishing growth without the continuous support of our sellers,” said Ho. “We are committed to continue helping them grow their business through various incentives such as Zero (0) Commission, Free Shipping Programme nationwide and Shopee University which is a series of free business workshops conducted nationwide to empower entrepreneurs with the necessary skills to sell online”.

“Tonight’s event is especially significant, not only in recognising success stories of mobile entrepreneurs, but paving the way for many more such stories in the future. This is something I am truly passionate about. It gives me joy to see corporates like Shopee not only develop a solid platform to thrust the industry forward, but also build a whole ecosystem around it to empower and equip entrepreneurs through programmes like Shopee Uni and the Mighty Moms campaign to build a sustainable and powerful mobile commerce landscape here. I look forward to the day when Malaysia will be known as the centre or capital of international mobile commerce”.

The Malaysian Digital Economy Corporation (MDEC) foresaw a more robust growth in the e-commerce sector. “We see a growing number of online entrepreneurs in Malaysia, some working from home while others are juggling between studying and holding a full-time job. We want these budding entrepreneurs to take advantage of the incentives the government has provided to take a more serious step in business, register their companies and work as SMEs to contribute to our economy’s growth in the long run,” said Wee Huay Neo, Director of eCommerce and Digital Free Trade Zone (DFTZ), MDEC.

During the event, Shopee also gave out the awards to the following categories:

From the awards listed, the 8 categories marked [V] were opened for public voting which ended on 20 March 2017.

Shopee App is available for download for FREE on Google Play and App Store. Visit www.shopee.com.my for more information.