(SUKAN) COMPLETE CARD ANNOUNCED FOR ONE: WARRIORS OF LIGHT IN BANGKOK ON 10 MAY 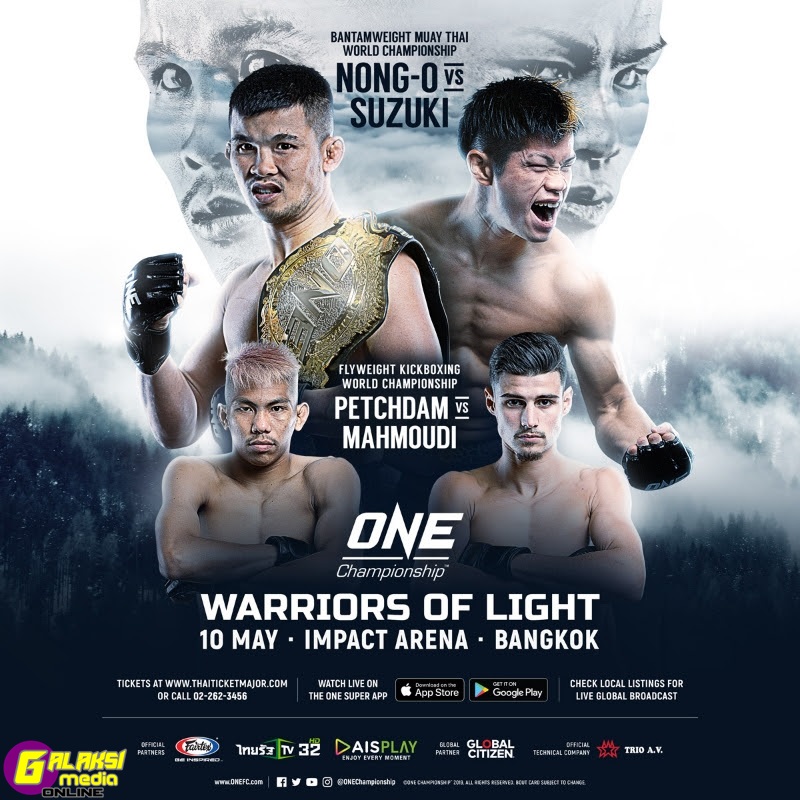 18 April 2019 – Bangkok, Thailand: The largest global sports media property in Asian history, ONE Championship™ (ONE), has just announced the complete card for ONE: WARRIORS OF LIGHT, set for the Impact Arena in Bangkok for Friday, 10 May. Once again, Thailand will play host to another world-class evening of martial arts action. The very best in local and international martial arts talent will showcase their skills on the ONE Championship stage.

In the main event, reigning ONE Bantamweight Muay Thai World Champion Nong-O Gaiyanghadao of Thailand will defend his title against Hiroaki Suzuki of Japan. In the co-main event, Muay Thai superstar Petchdam Petchyindee Academy of Thailand takes on Elias “The Sniper” Mahmoudi of Algeria for the inaugural ONE Flyweight Kickboxing World Championship.

Ticket information for ONE: WARRIORS OF LIGHT is available at www.onefc.com.

A living legend in the world of Muay Thai, multiple-time World Champion Nong-O Gaiyanghadao has captured nearly every major accolade in the sport and is considered one of the greatest strikers of all time.

Born to a family of farmers, Nong-O began his Muay Thai career at the tender age of nine. After a few years of sharpening his skills, he decided to leave home for Bangkok when he was 14 years old to pursue Muay Thai full-time, both living and training at his camp.

Earlier this year, Nong-O captured the ONE Bantamweight Muay Thai World Title with a unanimous decision victory over China’s Han Zi Hao at ONE: CLASH OF LEGENDS. He is now set to make the first defense of his World Title against Japan’s Hiroaki “Kaibutsukun” Suzuki.

Japanese striker Suzuki is one of the most exciting talents in ONE Super Series. He burst onto the scene with a spectacular performance against Deividas Danyla last November, and then followed up the victory with another scintillating showing against Mohammed “Jordan Boy” Bin Mahmoud last January.

Now, Suzuki enters the biggest bout of his career thus far, as he challenges Nong-O Gaiyanghadao for the ONE Bantamweight Muay Thai World Title.

In the co-main event of the evening, Thailand’s very own Petchdam “Baby Shark” Petchyindee Academy attempts to make history as the first ever ONE Flyweight Kickboxing World Champion when he takes on opponent Elias “The Sniper” Mahmoudi.

Petchdam is a multiple-time Muay Thai World Champion known for his devastating left kick, which is responsible for the majority of his wins. He trains out of the famed Petchyindee Academy in Bangkok alongside fellow Muay Thai World Champions Petchmorakot and Sorgraw. Over the course of his stellar career, the Thai hero has claimed several prestigious accolades, including Lumpinee Stadium and WBC World Muay Thai Championships, as well as a Toyota Marathon Tournament Title.

Now Petchdam has the opportunity to add the most valuable prize in martial arts to his trophy case — the ONE World Title.

Mahmoudi, on the other hand, is also a multiple-time Muay Thai World Champion who has trained in the sport since he was just five years of age. His competitive fire would see him fly to Muay Thai’s home country of Thailand at the age of nine, where he won his first professional bout with a flying knee knockout to earn the nickname of “The Sniper.”

Over the course of his career thus far, Mahmoudi has already compiled an excellent winning record with several knockouts on the way to World Titles in WMF, WPMF, and MTGP. He now looks forward to his first ONE World Title opportunity.

Japanese lightweight standout Kazuki Tokudome is back in action as he faces tough veteran Adrian “The Hunter” Pang of Australia in a three-round lightweight contest.

Tokudome is a former Pancrase Lightweight World Champion who trains out of Paraestra Hachioji in his native Japan, while Pang is a former Legend FC Lightweight Champion known for his extreme toughness and durability. The two warriors will throw down in what should be a clash of highly-aggressive come-forward action stars who bring fans to the edge of their seats.

Muay Thai superstar Rodtang “The Iron Man” Jitmuangnon of Thailand will once again showcase his incredible striking skills, this time against Cambodia’s Sok Thy.

Like many Thai warriors before him, two-time Omnoi Stadium Muay Thai World Champion Rodtang started training at a young age when he was just seven years old. He had his first professional Muay Thai bout at the age of 10.

Rodtang initially trained at a small camp in his hometown of Pattalung, but soon began traveling to the famed Jitmuangnon Camp in Bangkok in pursuit of better training. He would make the move permanent in order to train full-time and pursue his dreams of becoming a World Champion.

Sok Thy, meanwhile, is a Cambodian National Kun Khmer Champion. His father sent Thy and his older brother to a live-in training camp when he was just seven years old. A phenomenally hard worker, Thy already has hundreds of bouts under his belt. He even competed for a Muay Thai title in Thailand’s famed Lumpinee Stadium in 2017, and is the first Cambodian to ever do so.

Japanese bantamweight hopeful Shoko Sato is set to make his ONE Championship debut against New Zealand’s Mark “Tyson” Fairtex Abelardo in what should be an action-packed matchup.

Sato is a former Shooto Bantamweight Champion and a mixed martial arts veteran who is known for his knockout power. Nearly half of Sato’s overall victories have come by knockout finish. Abelardo, on the other hand, is a winner of the prestigious ONE Warrior Series and is also known for his finishing ability. This clash is guaranteed to produce fireworks as both competitors know not how to back down.

Local hero Pongsiri “The Smiling Assassin” Mitsatit of Thailand makes his highly-anticipated return to action opposite Robin “The Ilonggo” Catalan of the Philippines.

Catalan is a Muay Thai World Champion who started training in martial arts in 2006 with hopes of following in the footsteps of his older brother Rene, a multiple-time wushu world champion. He would go on to win numerous tournaments in both wushu and Muay Thai, including the Philippines National Wushu Sanda Championship in 2007 and 2008, and a IFMA Muay Thai World Championship in 2011.

Former CMSL Champion “Wolf of the Grasslands” Hexigetu of China will figure in what is expected to be an intense strawweight showdown with ONE Championship newcomer, Dangal Grappling Champion Ovais “The Enigma” Shah of Pakistan. The two square off in a three-round strawweight contest that features an interesting clash of styles.

Former ONE World Title challenger Janet “JT” Todd of the United States will take on Chinese striker and former WAKO Champion Chin Long Wang in the first bout of the evening to kick off ONE: WARRIORS OF LIGHT. 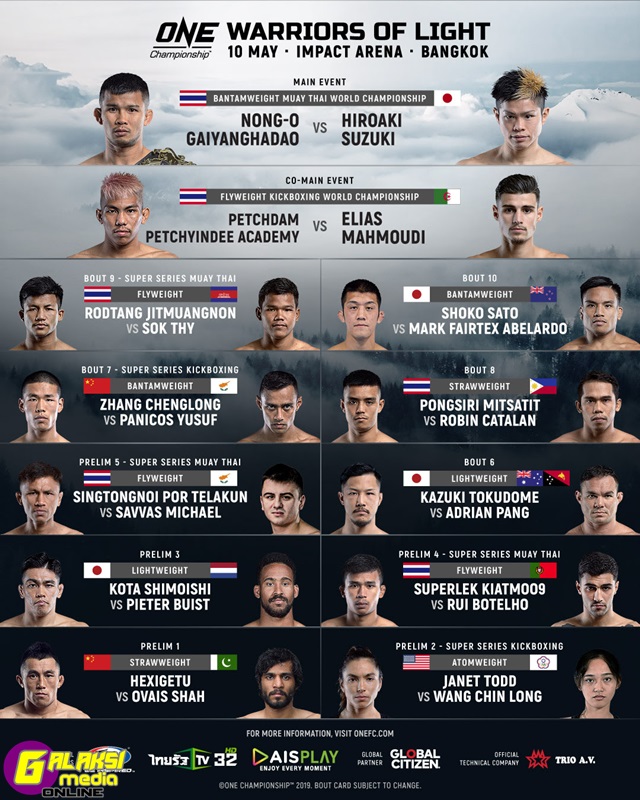 ONE: WARRIORS OF LIGHT
Friday, 10 May
Impact Arena, Bangkok, Thailand