Malaysia’s Keanu Subba (6-3) is looking to upset the hometown favorite Phoe “Bushido” Thaw (6-0) at ONE: PURSUIT OF GREATNESS in Yangon, Myanmar this Friday, 26 October. 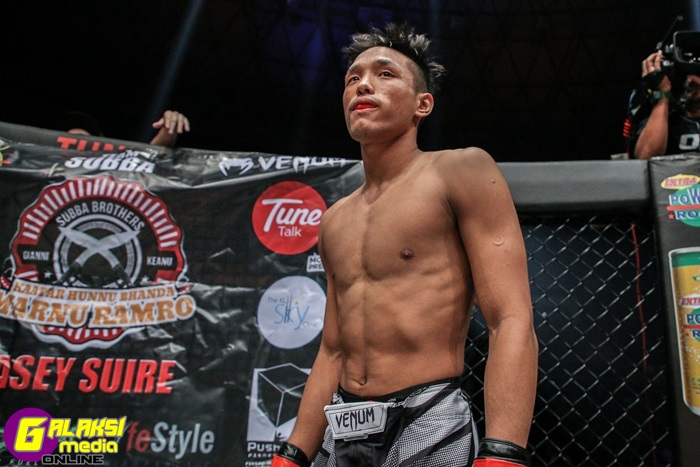 The 24-year-old, however, is not underestimating his opponent. He is aware of the local hero’s perfect record, who brings five KO and TKO first-round victories into the featherweight contest at the Thuwunna Indoor Stadium.

“He is a dangerous striker as we’ve seen on several occasions. I love this match because it’s happening at his backyard and I love upsetting the fans,” Subba says.

“I’ll be expecting something hostile as the local fans will always be supportive of their local heroes, but I won’t let their jeers affect me. I’m happy and have never been more prepared.”

The younger of the Subba brothers has noticed a slight hole in Phoe Thaw’s game, which he feels he can exploit and use against the Myanmar superstar.

“I feel he lacks experience on the ground, so I’m going to bring the fight to the ground and work my way to a victory from there,” the Malaysian continues.

“Ground and pound or a submission – I foresee something like that coming.”

Subba is no stranger to finishing his opponents.

Thus far, he has recorded five first-round wins in ONE Championship, two via submission and another three via knockout.

“He’s definitely got more knockouts,” the Kuala Lumpur resident concedes. “But experts should know I’ve recorded a few victories in similar fashion a couple of years ago.”

Subba’s last victory via knockout came in September 2016 at ONE: UNBREAKABLE WARRIORS.

He reversed his opponent’s attempt from a triangle armbar and started throwing heavy jabs before referee Joey Lepiten called it an end inside 4:31 of round one.

The Monarchy MMA representative’s only other two TKO’s came against Malaysia’s Rayner Kinsiong and Florian Garel.

Phoe Thaw’s takedown defense has yet to be tested, but Subba claims he is ready for a stand-up war anytime.

“I’m confident wherever this fight goes,” he says. “If I can’t take him down, a back-and-forth battle will do to.”

Subba’s bout with “Bushido” will be closely watched by millions of fans worldwide before the co-main event between Rafael Nunes and Movlid Khaibulaev takes centerstage.