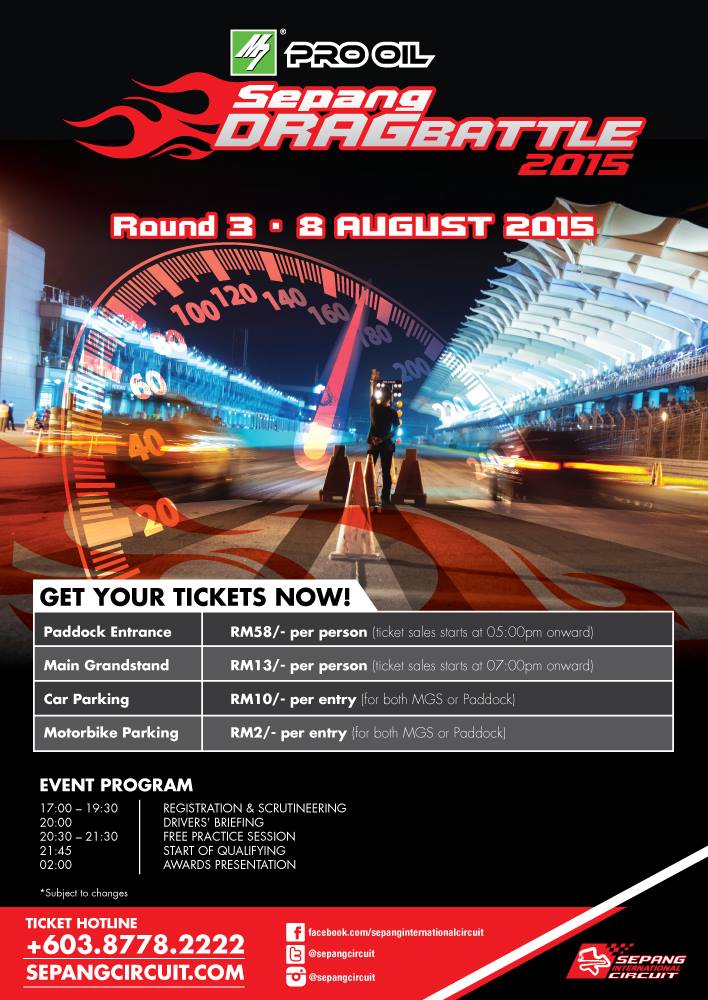 SEPANG, 7 August 2015 – Following the conclusion of the eni FIM Superbike World Championship 2015 (WSBK) Malaysian Round on 2 August, motorsports enthusiasts in Malaysia can look forward to a slew of other exciting competitions hosted at Sepang International Circuit (SIC) beginning with Round 3 of the M7 Pro Oil Sepang Drag Battle 2015 on 8 August 2015.

“I commend the team for their good work, organising a successful WSBK 2015 Malaysian Round on and off the track. I thank our sponsors for their support and the vendors for their continued participation, which offers even more variety to the public. Motorsports enthusiasts can be assured that we are always looking forward to offering them the next adrenaline rush soon, whether it is a huge international event like the upcoming Shell Malaysia Motorcycle Grand Prix 2015 or a wide selection of local and regional events to suit every preference,” said Dato’ Razlan Razali, Chief Executive Officer of SIC.

The main upcoming event at the Sepang Circuit is the Shell Malaysia Motorcycle Grand Prix 2015 happening from 23 to 25 October 2015, with tickets beginning from RM42.40 inclusive of GST for a C2 Hillstand ticket to RM318 inclusive of GST for a Premier Roving ticket – which offers the freedom to move about in the various seating zones. Meanwhile, motorsports fans will also be undoubtedly looking forward to other events taking place from August to December 2015, including the Malaysia Championship Series Cars for Touring Production cars, the Pirelli Malaysia Superbike (MSBK) Championship, the Sepang 1000km, and the Sepang 12 hours races.

Last weekend, the WSBK 2015 Malaysian Round concluded on a high both on and off the track at Sepang. For 24-year-old Wan Shamsul Fatah, it was an unforgettable day, as he won the WSBK Wheelie Challenge with the longest wheelie of 28.86 seconds to take home a Benelli TNT 600 GP Edition worth RM32,000. He had been in contention with four other finalists to perform their longest wheelie on the static bike for the prize. The five of them had qualified for the finals by participating in the WSBK Wheelie Challenge during the SIC Zoomers roadshow to promote the WSBK, that saw SIC’s convoy of Zoomers travelling as far as Melaka and Johor as well as Genting and around the Klang Valley over three weekends.

The supporting activities were also a big hit with visitors, including the Stunt Show, Bike Parade, riders’ autograph session, pit lane walk, Motack, Motojamm, paddock show and many more. In particular, the fans were thrilled to have the opportunity to meet their favourite WSBK riders such as Jonathan Rea, Tom Sykes, Chaz Davies and the legendary Max Biaggi, who competed for Team SIC Malaysia as a wildcard entry. Visitors also enjoyed the opportunity for photographs with the ever popular WSBK girls and checking out the attractive promotions and product offerings from more than 20 vendors.