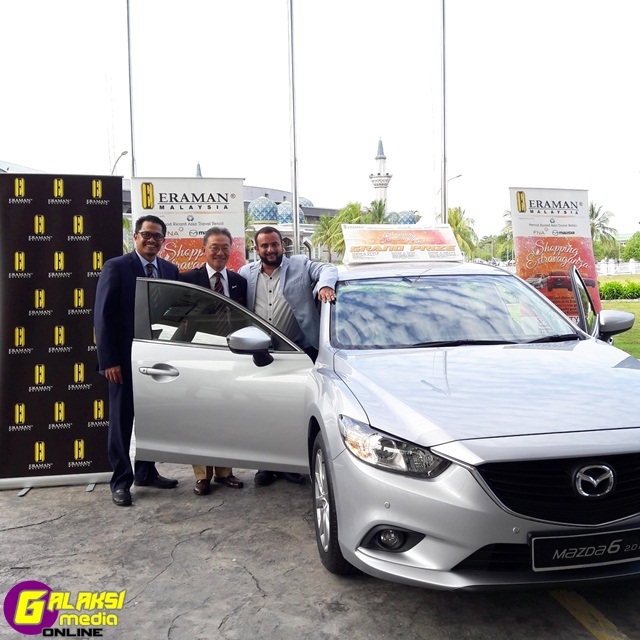 Sepang, 7 June 2017 – The year-long ERAMAN SHOPPING EXTRAVAGANZA (ESE) ended on a high note recently with the grand prize winner driving off with a brand new Mazda 6 while 16 other lucky shoppers received cash vouchers of RM4,000 and RM3,000 in the ERAMAN Shop & Drive Contest.

Mr. Choudhury Soumik from Kolkata, India, was the excited recipient of the keys to the most sought-after prize of the entire campaign, receiving the coveted Mazda 6 from Datuk Seri Yam Kong Choy, Chairman of Malaysia Airports (Niaga) Sdn Bhd at the Malaysia Airports Holdings Berhad corporate office in Sepang. The brand new Mazda 6 is equipped with the SKYACTIV family of engines for greater fuel efficiency and endless driving pleasure.

“It was such a wonderful surprise when I found out the fantastic news of my win. Never in my wildest dreams could I ever image that my purchase of perfumes at the International Departure Hall of klia2 would lead to this wonderful reward. Thank you so much to ERAMAN; I am a loyal customer and will continue to patronise their outlets on my future trips to Malaysia,” said Mr Choudhury Soumik.

A total of 301,273 entries were received for the three phases of the ERAMAN Shopping Extravaganza, contributing a double digit growth for ERAMAN. The number of entries for the final contest increased by 23% compared to the previous contest where 112,000 entries were received. The majority of customers who participated in the three contests were from Malaysia followed by China, India and Indonesia.

To take part in the ERAMAN Shopping Extravaganza contests, all shoppers had to do was spend a minimum of RM250 at any of ERAMAN’s participating outlets. Over the course of the three contests, lucky winners took home attractive weekly prizes of cash vouchers, stylish BALLY handbags or Swarovski jewellery, in addition to the grand prizes of a Honda City, Mazda CX5 and Mazda 6.

Said Datuk Seri Yam Kong Choy, Chairman of Malaysia Airports (Niaga) Sdn Bhd, “We take much pride in being the largest airport duty free and travel retail brand of Malaysia Airports. Over the years, we have received tremendous support from shoppers and travellers from all over the world who have been able to enjoy the premier quality products available in our stores. The ERAMAN SHOPPING EXTRAVAGANZA, with the many exclusive prizes offered, was organised to thank and reward our loyal patrons for shopping at our participating outlets in KLIA, klia2, Penang, Langkawi, Kuching, Kota Kinabalu International Airport, Sultan Ismail Petra Airport and Labuan Airport.

“As the premier retail brand under Malaysia Airports, ERAMAN has evolved in the last couple of years, in line with the changing landscape of the industry within which we operate. We continue to diversify our offerings in Malaysia, and across the region, as we continue to embrace the many exciting possibilities and challenges that lie ahead, and grow our presence in leading airports in Malaysia and regionally,” added Datuk Seri Yam.

Pernod Ricard, as the campaign’s platinum sponsor, also offered an additional entry form for shoppers and 20% off on the purchase of selected bottles such as Chivas, Martell, The Glenlivet, Royal Salut and Absolut, as well as 25% off on the purchase of two bottles.  FNA Marketing (M) Malaysia Sdn Bhd, as the silver sponsor, offered special offers for its branded chocolates such as AnthonBerg, Cadbury, Goldkenn, Storck and Toblerone whereby purchase of between two to four items entitled the purchaser to a Gift-with-Purchase or another item free.

This year ERAMAN is focused on creating even more exciting promotions, rewarding loyal customers and developing strategic collaborations with partners and brand principals. The ERAMAN Shopping Extravaganza 2017/18 will kick off in June 2017 to reinforce the ERAMAN value to shoppers.  Together with Malaysia Airports Holdings Berhad, ERAMAN will be offering bigger and better prizes, which includes the grand prize of not one but three BMW 318i cars. So shoppers, head to the ERAMAN outlets at the various airports nationwide and shop till you drop during Phase 1 (June/July 2017), Phase Two (November/December 2018) and Phase Three (April/May 2018).