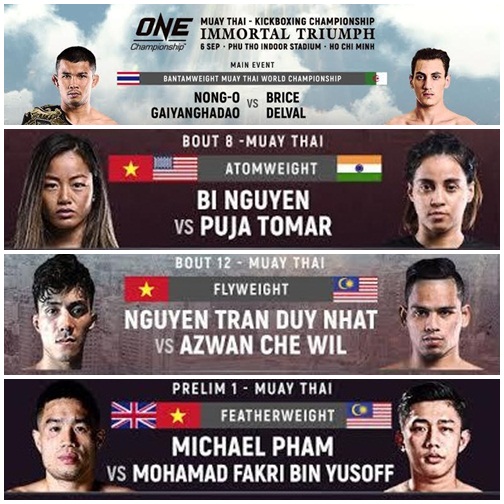 ONE: IMMORTAL TRIUMPH, set for Ho Chi Minh City’s Phu Tho Indoor Stadium on Friday, 6 September, features 28 of the most fearsome strikers from around the world – all hoping to make a name for themselves on the global stage of martial arts.

Knockouts and fast-paced action are guaranteed in this first-ever all-ONE Super Series spectacle, and here are three reasons why Malaysians cannot miss this spectacular showcase in Vietnam.

With more than two decades of experience, the Thai warrior has continuously exhibited his one-of-a-kind skills in each appearance at The Home Of Martial Arts – and expect this to be a similar outing for the Evolve MMA representative.

He has undeniably cemented his legacy, but his Algerian opponent Delval has a few tricks in his bag, which could turn the match around in an instant.

Both strikers are versatile, and on paper, it is tough to pick a winner from this headliner.

#2 Two Mixed Martial Arts Atomweight Stars Set for A Striking Delight
The art of Muay Thai and Wushu will be tested against one another when hometown hero Bi “Killer Bee” Nguyen faces India’s Puja “The Cyclone” Tomar in an atomweight Muay Thai duel.

This match marks the duo’s debut in ONE Super Series, following their impressive outings in the mixed martial arts discipline.

Nguyen’s first love has always been Muay Thai and Tomar’s ability to strike with a wushu background compliment each other well.

These warriors have a combined 15 years of experience in the striking department, and expect them to apply every “art of eight limbs” weapon when they compete in the ring.

Download the ONE Super App to catch ONE: IMMORTAL TRIUMPH on Friday, 6 September in Ho Chi Minh City, Vietnam.

Read More From ONE Championship:
Nong-O Vs. Brice Delval Headlines ONE’s First Vietnam Show On 6 September
Top 5 Performances From The Stars of ONE: IMMORTAL TRIUMPH
Bobo Sacko Predicts A ‘True War’ Against Kulabdam In Vietnam