(SUKAN)  ‘Ant Man’ Itching For Another Shot On The Global Stage 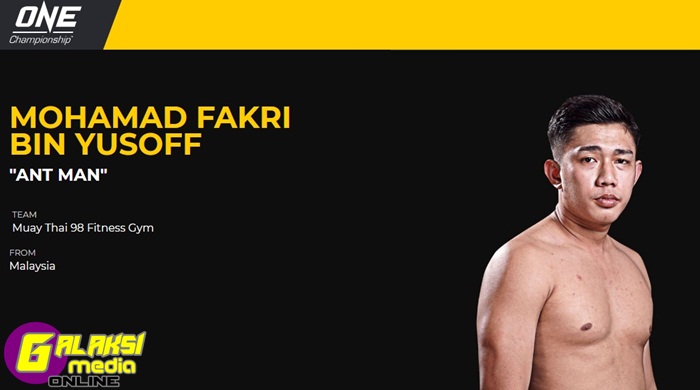 For Malaysia’s Mohamad Fakri “Ant Man” Bin Yusoff, it has always been a dream to be a part of ONE Championship’s stable of warriors.

He watched in awe when his good friend Mohammed “Jordan Boy” Bin Mahmoud made his ONE Championship debut in Kuala Lumpur back in December 2018, and “Ant Man” silently vowed he, too, would carve his path in The Home Of Martial Arts.

The Kelantan native got his chance on 6 September when he made his debut at ONE: IMMORTAL TRIUMPH in Ho Chi Minh City, Vietnam against Michael “The Beast from the East” Pham in a three-round featherweight Muay Thai duel.

Unfortunately, the 23-year-old lost his debut by unanimous decision.

Recalling his experience, “Ant Man” – a Muay Thai instructor at Muay Thai 98 Fitness Gym in Johor – said, “I was in Vietnam for a week with my team, including Mohammed. It was my first time there, my first time on a world stage, and to be honest, I was both excited and nervous.”

“To think that I was finally going to be a part of ONE Championship’s show and be in the company of all these great fighters. It was a dream come true,” he added.

From how the athletes were taken care off, to the weigh-ins, and pretty much everything in between made it a special occasion, despite his outcome.

To top it off, it was ONE Championship’s first-ever striking only card, which meant the Vietnamese fans packed the Phu Tho Indoor Stadium to the brim.

“I’d never fought in front of so many people,” the Johor Bahru-based martial artist admitted.

“I was excited to show what I could do, but at the same time, I felt kind of overwhelmed by it all.”

“I guess all those elements contributed to the eventual outcome.”

However, he is not giving any excuses for the loss and promises a better performance when ONE Championship offers him another shot on the global stage.

“I didn’t allow myself to dwell too long on the defeat. These things happen, and that’s how it is in competitions. You win some and you lose some. What’s important is what [lessons] I take back from this experience, and what I do with it,” he said.

“Perhaps it’s a good thing I lost because then I know what it feels like, why it happened, and what not to do. I’m determined to rise from that experience and become a better fighter. I can’t wait for the golden chance to be presented to me again.”

Next up for The Home of Martial Arts is a trip to Tokyo, Japan for ONE: CENTURY PART I and PART II.

The Home Of Martial Arts will break new ground at the iconic Ryogoku Kokugikan as it brings multiple World Title bouts, a trio of World Grand Prix Championship Finals, and several World Champion versus World Champion matches on Sunday, 13 October.

CENTURY PART II meanwhile gets underway at 4:00pm Malaysia Time (MYT) on Astro Super Sports 2. All the main card action will continue on that channel, but RTM TV2 will cut-in to the live broadcast at 7:30pm MYT.

You can also download the ONE Super App to catch all the action live and for free.