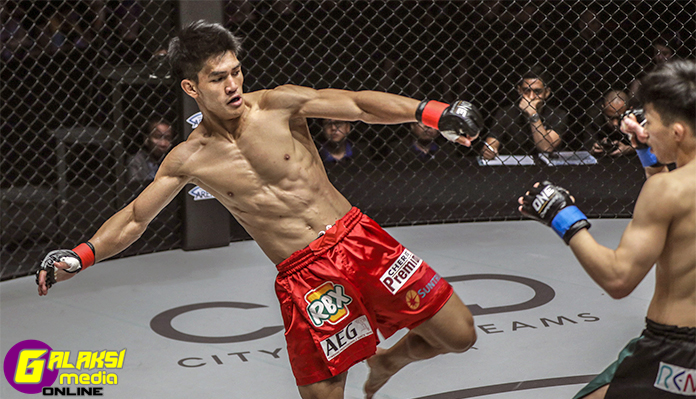 When Danny “The King” Kingad started his mixed martial arts career, he looked up to Demetrious “Mighty Mouse” Johnson as a role model and as one of his martial arts inspirations.

When Johnson joined ONE Championship late last year, Kingad had immediate visions of grandeur in wanting to face the legendary flyweight.

That day may be sooner than expected as Johnson sits squarely in the opposite bracket of the eight-man ONE Flyweight World Grand Prix of which Kingad is also a participant.

The tournament kicks off ONE: A NEW ERA on 31 March at the Ryōgoku Kokugikan in Tokyo, Japan.

“Demetrious Johnson is one of my idols growing up,” Kingad said.

“I’ve watched his entire career and he was always a source of motivation for me. Now that he’s here in ONE Championship, and in the same division as me, it’s surreal. Up to now I still can’t believe it. More so that I have the chance to face him if I emerge victorious in my bracket of the ONE Flyweight World Grand Prix, I still can’t wrap my head around it.”

Kingad, excited as he is to finally meet Johnson in person, needs to take care of business at hand. First up for Kingad is a showdown with former ONE World Title challenger Andrew Leone. If he can get past the American, Kingad will move on to the semifinal round where he could face the winner between Kazakhstan’s Kairat Akhmetov and Australia’s Reece McLaren.

“The King” is doing everything he can in training to make sure he puts himself in a good position to emerge the victor in his tournament bracket.

“The moment ONE Championship announced (Demetrious Johnson) would be joining the promotion, I immediately doubled up on my training,” Kingad said.

“I have put more effort into enhancing my skills, knowing that I could possibly meet him in the cage one day. I’m glad he is in my division and it would be a dream come true if I get the chance to fight him. He’s the best mixed martial artist in the world right now, and it would be an honor to test my skills against him.”

Kingad has some great voices in his corner. For one, guiding his career is Filipino martial arts pioneer and Team Lakay head coach Mark Sangiao. Another man steering the young stalwart towards the correct path is former ONE Flyweight World Champion Geje “Gravity” Eustaquio.

Eustaquio had some sage words of advice, having been at the top of the division and faced its toughest tests and though he dreams of facing Johnson at the end of it all, Kingad is laser focused on the task at hand.

“Right now, however, I’m just focused on the man in front of me,” Kingad concluded.

“I know this bout against Andrew Leone is going to be a tough one. Kuya Geje [Eustaquio] told me to never let my fights go to the judges’ decision and to always look to finish. He knows my skills and capabilities very well, so his advice for me was to sharpen my finishing skills and end every match as quickly as I can. If I can win this tournament, I can fight for the title.”