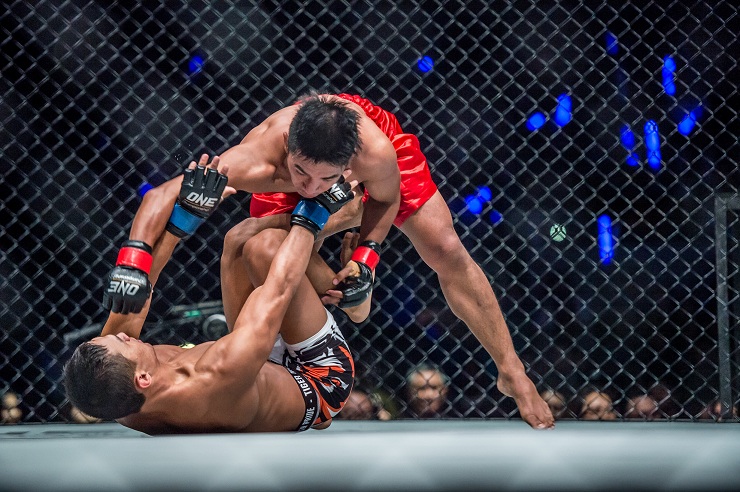 26 January 2018 – Manila, Philippines: The largest global sports media property in Asian history, ONE Championship™ (ONE), sent the Mall of Asia Arena crowd into a frenzy last Friday night in Manila, with another thrilling evening of authentic martial arts action. The absolute best in local and international martial arts talent took to the ONE Championship cage at ONE: GLOBAL SUPERHEROES to showcase their incredible skills. In the main event, Geje Eustaquio walked out of the arena to a roar of adulation and with the ONE Interim Flyweight World Championship around his waist, defeating former world champion Kairat Akhmetov.

In the main event of ONE: GLOBAL SUPERHEROES, Geje “Gravity” Eustaquio of Baguio City, Philippines clinched the ONE Interim Flyweight World Championship, edging Kairat “The Kazakh” Akhmetov by unanimous decision in an exhilarating five-round title tilt. Although Akhmetov managed to showcase his wrestling, it was largely ineffective against Eustaquio, who was far superior in the striking department for the majority of the bout. Eustaquio repeatedly connected on Akhmetov with crisp, clean combinations throughout the championship contest. In the end, all three judges saw the bout in favor of Eustaquio to win by unanimous decision.

Geje Eustaquio, ONE Interim Flyweight World Champion, stated: “I don’t know what to say. This belt is not mine to take, it’s ours. Thank you to my family who was always there from the start, coach Mark Sangiao, and the entire Team Lakay who never doubted me and always believed that one day I would stand here holding this belt. I am proud to represent this flag all throughout the world. Here is your world champion from the Philippines. Adriano [Moraes] I know you’re there. I got a belt! Give me one more try and I hope to give you a better challenge this time.”

In the co-main event of the evening, 22-year-old Joshua “The Passion” Pacio unveiled an improved grappling game, submitting China’s Lan Ming Qiang via rear naked choke in the very first round. Pacio started off with his world-class wushu, operating from range with fast and powerful kicks. After taking the action to the mat, Pacio effortlessly took mount and pounded on his foe who soon gave up the back. With the body triangle locked in, Pacio sunk his forearm underneath Lan’s neck and secured the bout-ending maneuver.

Rafael “Indio” Nunes of Brazil made a triumphant return to the ONE Championship cage after two years away from competition to defeat Filipino featherweight veteran Eric “The Natural” Kelly by second-round submission. The 30-year-old Muay Thai specialist kept Kelly on the defensive with his striking before taking matters to the ground and sinking in a deep d’arce choke to score the finish.

A grueling flyweight showdown between “The Southern Eagle” Ma Hao Bin of China and Sotir Kichukov of Bulgaria transpired inside the ONE Championship cage. Neither of the two would give each other any quarter for three whole rounds, as they traded their best offense all throughout. Although Kichukov would have his moments on the feet, most of the action took place on the ground where Ma enjoyed a  tremendous advantage. In the end, Ma turned in another well-rounded performance to claim victory via unanimous decision.

Japanese grappling prodigy Hayato Suzuki placed himself back on the winning track, pulling off a first-round submission victory over former world title contender Yago Bryan of Brazil. With 57 seconds remaining in the opening period of the strawweight contest, Suzuki latched onto a wrenching rear naked choke to force the tap, notching his eighth submission win as a professional.

Emilio “The Honey Badger” Urrutia of the United States continued his impressive run in ONE Championship, knocking out Brazilian jiu-jitsu world champion Bruno Pucci in the first round. Urrutia stifled Pucci with crisp boxing combinations, making it difficult for the Brazilian to bring the action to the mat. Urrutia secured the statement-making finish by connecting on a sensational left hook past the midway point, sending Pucci crashing to the canvas.

Filipino featherweight standout Edward “The Ferocious” Kelly delivered a sensational first-round knockout of opponent Meas Meul, dropping the Cambodian with a high kick merely seconds into the bout. At the opening bell, Kelly engaged Meul at the center of the cage and connected on a quick three-punch combination before delivering the final blow that sent Meul face first into the canvas.

Jomary Torres of Manila, Philippines scored the most impressive win of her young career, authoring a swift knockout finish over Team Lakay atomweight ace April Osenio. Torres left a lasting impression in her third trip to the ONE Championship cage, driving Osenio to the mat with a high-impact slam before putting the final touches with follow-up ground strikes to claim the knockout.

Rajinder Singh Meena of India captured his first victory inside the ONE Championship cage, defeating highly-touted Chinese lightweight prospect Zhang Ze Hao by way of first-round submission. Determined to break into the winner’s column, Meena needed just 42 seconds in the opening round to put Zhang to sleep with a guillotine choke.

Kicking off ONE: GLOBAL SUPERHEROES was a riveting strawweight encounter as Indonesian dynamo Adrian Matheis squared off against the debuting Eddey Kalai of Malaysia. Matheis weathered a gutsy opening sequence from Eddey, who effortlessly pummeled the ONE Strawweight Indonesia Tournament Champion with his superb boxing. The complexion of the contest took a drastic turn when Matheis gained leverage on the mat, catching Kalai with a rear naked choke to force the tap.

Official results for ONE: GLOBAL SUPERHEROES