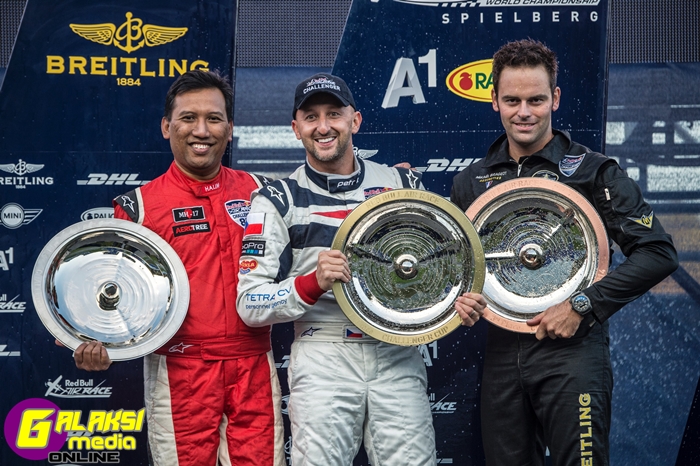 SPIELBERG (Austria) – Petr Kopfstein of the Czech Republic won the Red Bull Air Race World Championship’s Challenger Cup competition on Saturday with an exciting victory in a winner-take-all season final showdown in Spielberg, Austria with Malaysia’s Halim Othman taking second place and France’s Mikael Brageot finishing third. On a sunny autumn afternoon in the Austrian Alps, Kopfstein took top honors in the new competition that was introduced at the start of the 2014 season as an “incubator” to give the promising pilots experience with high-speed, low-altitude flying under race conditions and to help develop their flying skills.

Kopfstein was cheered on by a crowd of 15,000 spectators on a brilliant day for flying, posting a title-winning time of 1:05.799 on the track set up in the infield of the Red Bull Ring in front of one of the largest crowds for a Challenger Cup competition seen this year. Othman stopped the clock in 1:06.900 to win second place in the competition, which was held a day before the season finale of the Red Bull Air Race World Championship’s master class on Sunday, and Brageot had a time of 1:08.112 to take third place.

“Everything went as planned and It feels great to win,” said Kopfstein. “I went smooth and as fast as possible but also safe,“ said Kopfstein, who also won the first race this. ” I tried to be smooth and stay away from the trees and to keep the energy up. That’s the most important thing up there because of the challenge of the elevation changes.“

Also competing in Saturday’s first-ever winner-take-all Challenger Cup final were Francois Le Vot in fourth place in a time of 1:08.132 and Daniel Ryfa of Sweden who took fifth in 1:08.180 of took fifth. Tom Bennett of Britain did not start the final and finished sixth.

The Challenger Cup was designed to enhance the safety of the world’s fastest motorsport and the 11 pilots competing won praise from their coaches.

The other five pilots taking part in the Challenger Cup this year were: Claudius Spiegel of Germany, Juan Velarde of Spain, Peter Podlunsek of Slovenia, Cristian Bolton of Chile and Lukas Czepiela of Poland.

Mangold said that he enjoyed watching the Challenger Cup pilots learning the ropes and improving during the course of the seven-race season: “They’ve done a fantastic job.  I’ve seen a lot of maturity in their flying.”