(SUKAN) IGOR SVIRID TO DEFEND ONE MIDDLEWEIGHT WORLD CHAMPIONSHIP TITLE AGAINST VITALY BIGDASH IN MAIN EVENT OF ONE: TIGERS OF ASIA IN KUALA LUMPUR 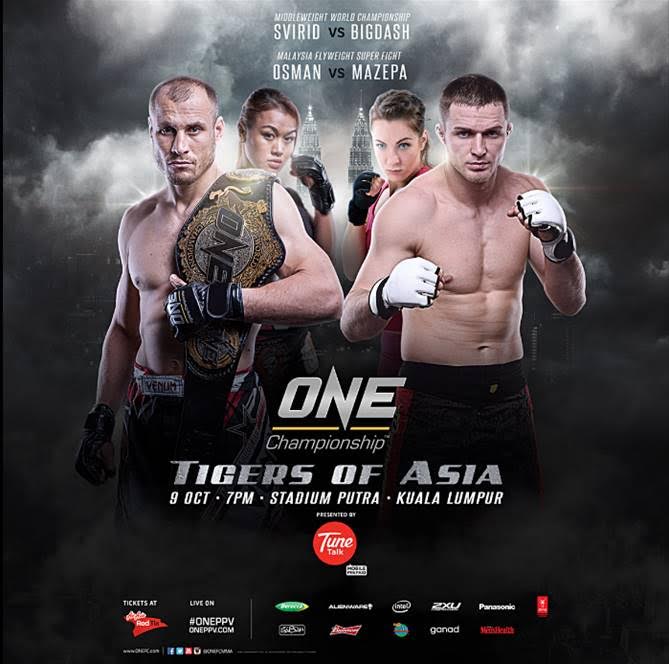 CEO of ONE Championship™, Victor Cui, stated, “You can always count on ONE Championship’s dedication to the city of Kuala Lumpur. We’ve prepared a memorable night of adrenaline-pumping thrills for fans here and all across the world headlined by an explosive world championship title fight! Witness all the action live as the best local and international MMA fighters compete inside the ONE Cage. Fans will not want to miss what goes down on 9 October!”

In the Malaysia Super Fights, Malaysia’s fighting belle, Ann “Athena” Osman, is back and ready to rock Kuala Lumpur once again in her highly-anticipated return to the ONE Cage. Working to constantly improve her overall MMA game, Osman has been deep in training on the coastal locale of Kota Kinabalu. She will get the chance to show off her new moves against Russian kickboxer, Irina Mazepa.

Irina Mazepa is making her debut inside the ONE Cage a memorable one by taking on one of the female flyweight division’s best fighters. A six-time Wushu world champion and a K1 world champion kickboxer, Mazepa’s devastating striking skills will be put to the test against Ann “Athena” Osman.

Ev “E.T.” Ting’s most recent fight was against tough Russian foe Marat Gafurov, in one of the most valuable learning experiences for the 26-year old Auckland MMA product. Ting is currently 3-1 inside the ONE Cage and will now look to get back in the winner’s circle in front of his hometown crowd with a victory over Filipino stalwart, Honorio Banario.

Honorio Banario of the famed Team Lakay in Baguio City, Philippines, is back and ready to show fans exactly what he’s been working on in the past few months since his last fight. An expert in Wushu, Banario will showcase his lightning quick strikes against Malaysia’s own, Ev Ting, in a featherweight showdown that promises to electrify the arena.

Always a mainstay in Kuala Lumpur fight cards, lightweight standout Peter Davis is unbeaten in ONE Championship when fighting in Malaysia’s capital city. Davis is currently on an incredible four-fight win streak which includes one submission and three straight TKO wins. His next test is certainly one that will push him to the limit as he takes on the veteran from Queensland, Australia, Adrian “The Hunter” Pang.

Lightweight veteran Adrian Pang was impressive in his ONE Championship debut last December against Vincent Latoel. His submission via Guillotine Choke showcased his ability to grind against a tough opponent and come through with a technical victory. Pang continues his stellar career against one of Malaysia’s most popular stars in and out of the cage, Peter Davis.

Top featherweight Eric “The Natural” Kelly of the Philippines will make his much awaited return to the ONE Cage after a year off from competition. His last bout was an unforgettable scrap against Rob Lisita, one that resulted in Kelly taking home the first ever ONE Warrior Bonus in a masterful performance. Standing in Kelly’s way on his road back to the top is Hiroshige Tanaka.

Japanese MMA standout Hiroshige Tanaka made his ONE Championship debut last year against Herbert Burns. He is 10-2 in MMA and has been working on improving his game for the past year. Tanaka gets a chance to showcase his explosive progress against one of the division’s finest in Eric Kelly.

Japanese MMA wildcard Riku Shibuya won the hearts of fans in his battle with ONE Flyweight World Champion, Adriano Moraes, just a few months ago. Shibuya’s unorthodox style and powerful combinations were on full display, and now, fans in Kuala Lumpur will get to see Shibuya once again as he takes on the equally unpredictable Eugene Toquero of the Philippines.

Eugene Toquero is one of the most exciting fighters to come out of Manila and has impressed with a solid 7-1 MMA record. The former celebrity MMA trainer’s only loss came against fellow countryman Geje Eustaquio, but he’s been unstoppable since. Toquero’s time inside the ONE Cage has been memorable, as he’s delighted fans with impeccable striking and flashy combinations. His flyweight clash against Riku Shibuya should be one for the books.

Dae Hwan Kim challenged for the ONE Bantamweight World Championship in his last fight, but came up short against reigning champion Bibiano Fernandes. Despite the setback, Kim gave the champ all he could handle and delighted fans with his fast-paced, high volume attack. Kim’s striking prowess is virtually unmatched in the division, and it will be interesting to see how effective he’ll be against one of China’s top MMA prospects, Teng Li Ge in Kuala Lumpur.

Fighting out of Xian, China, Teng Li Ge has a background in Sanda. Born in Inner Mongolia, he embodies what being a true warrior is all about. He has the heart, will and possesses the tenacity to overcome obstacles and claim victory. Teng Li Ge will be making is ONE debut in Kuala Lumpur and he is prepared to show the world that he can beat the highly regarded Dae Hwan Kim.

22-year old prospect Gianni Subba has gotten some great wins under his belt, and has scored two stoppages in his most recent bouts — one by submission and one by impressive KO. Subba is one of the most promising young fighters on ONE Championship’s roster and will look to continue his win streak against Evolve MMA grappler Marcos Ratinho.

Despite just recently debuting as a professional mixed martial artist earlier this year, Evolve MMA instructor Marcos Ratinho is a Brazilian Jiu-Jitsu world champion and has all the tools necessary to be a force inside the ONE Cage. He’ll have to dig deep into his bag of tricks however if he wants to upset rising star Gianni Subba.

Popular Malaysian fighter Saiful “The Vampire” Merican is 2-2 inside the ONE Cage and has proven his mettle early in his career by figuring in some tough bouts against worthy competitors. The young flyweight has good all-around skills that will be put to the test against fellow Malaysian warrior, Melvin Yeoh.

Melvin Yeoh is proving to be a fixture in action-packed bouts in his home country. The veteran Malaysian athlete is showing off his consistency as a complete fighter featuring fast-paced striking and technical grappling. Yeoh is never in a boring fight and he will get the chance to electrify the crowd once more against Saiful Merican.

In a flyweight battle, Ruel Catalan of the Philippines takes on Brazilian Jiu-Jitsu black belt and member of the Evolve MMA Fight Team, Almiro Barros, in a classic striker versus grappler matchup. The 27-year-old Filipino fighter is looking to get back on track with a victory against an opponent with a knack for submissions.

20-year-old Agilan “Alligator” Thani of Kuala Lumpur will take on Egyptian Top Team’s Hisham Hiba in a clash of welterweights. Thani, who is known for his solid ground skills will look to submit his kickboxer opponent in a collision between a striker versus grappler.

Malaysia’s Keanu Subba, the Featherweight Champion of the Malaysian Invasion Mixed Martial Arts (MIMMA) amateur series will make his professional debut when he goes head to head with Florian Garel of France in a three-round featherweight matchup to kick off ONE: TIGERS OF ASIA.