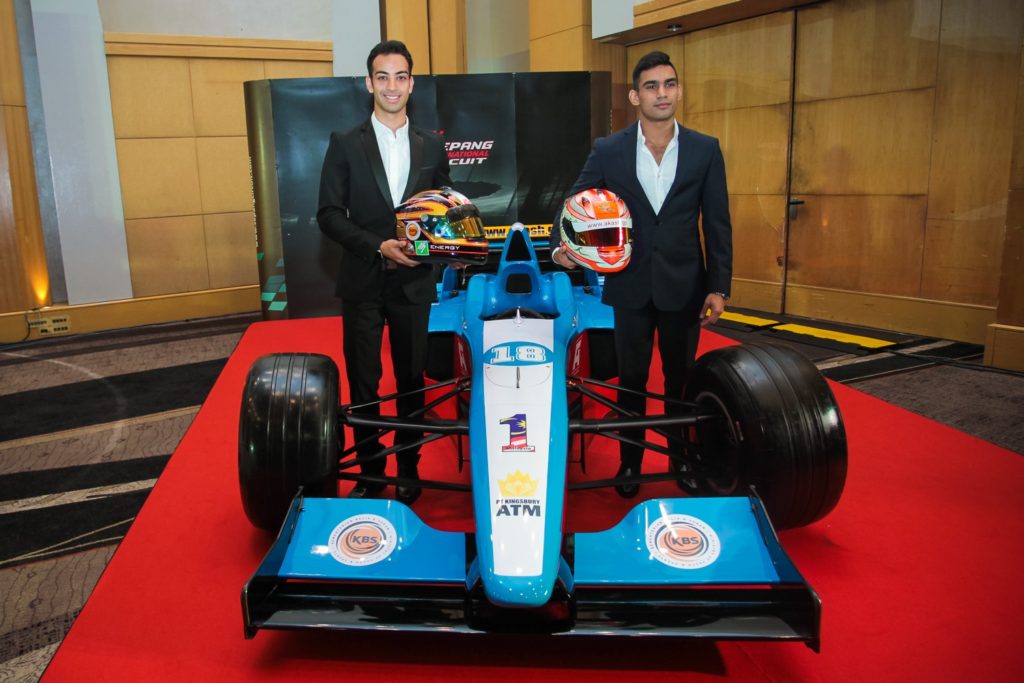 SEPANG, 30 APRIL 2016 – The 18th edition of the 2016 Formula1 Malaysia Grand Prix will have an added excitement for local fans, as two young, up-and-coming Malaysian drivers will be part of the showpiece. Nabil Jeffri and Akash Neil Nandy will be participating in the GP2 and GP3 series respectively. This follows the agreement of the Formula One Management (FOM) to hold the prestigious GP2 and GP3 during the F1 race weekend in Malaysia.

Nabil and Akash were introduced as drivers representing Malaysia, racing a full season in their respective teams, Arden International in GP2 and Jenzer Motorsport in GP3. Both series commence on 13 May 2016 in Barcelona, Spain with 11 rounds and 9 rounds for the GP2 and GP3 respectively. The penultimate round takes place at the Malaysian F1 at Sepang International Circuit (SIC) on 2 October 2016. The event was officiated yesterday by the Minister of Youth and Sports Malaysia Khairy Jamaluddin, accompanied by Tan Sri Mokhzani Mahathir, Chairman of SIC and Dato’ Razlan Razali, Chief Executive Officer of SIC.

Dato’ Razlan expressed his delight at having not one but two Malaysian drivers in the GP2 and GP3 series. “Having Malaysian drivers competing during the 2016 Formula1 Malaysia Grand Prix in Sepang is undoubtedly something that the local fans have been yearning for. Both GP2 and GP3 are talent development series for drivers aspiring to achieve the coveted F1 driver position. Ardent fans of F1 in Malaysia will now be able to follow not just the F1 but also the GP2 and GP3 through the 2016 race calendar that will take our Malaysian boys through a thrilling season,” he said. 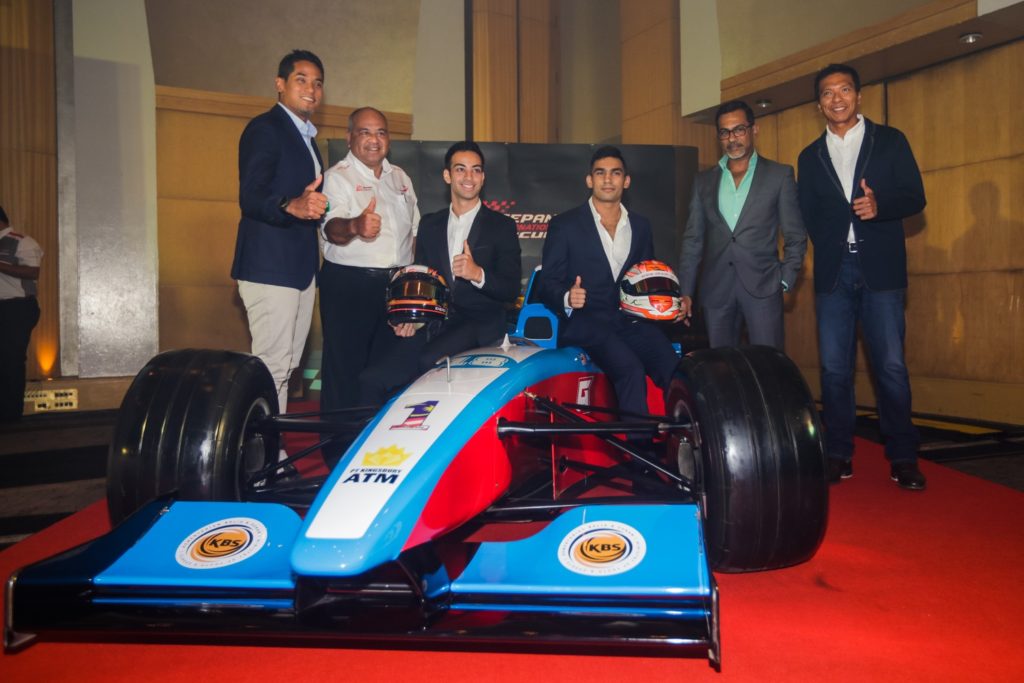 Dato’ Razlan said SIC had been pushing for the inclusion of GP2 and GP3 in the Formula 1 in Malaysia since the GP2 Asia last raced in 2013 at the circuit. “We are pleased that the F1 is emulating MotoGP with the inclusion of the GP2 and GP3 as support races. This is what we, as the organiser and promoter of the Malaysian F1, have been asking for to make it more exciting for local fans, especially with the participation of young Malaysian talent this year. Furthermore, the GP2 and GP3 traditionally provided superb wheel-to-wheel excitement, thrilling fans every time in past seasons”, he added.

Nabil, 22, began his racing career at Asia Max Challenge (Rotax) back in 2008 and 2009, where he became the Overall Champion. He finished a credible 6th place in the Rotax Max Grand Finals 2009 in Sharm El-Sheikh, Egypt out of 72 drivers from 60 countries. He continued racing in the JK Racing Asia Series in 2012 and at the ATS Formel 3 Cup in 2014, both of which he finished 2nd overall.

In 2010, Nabil was the youngest ever driver to test a Formula One car. At 16, Nabil conducted straight-line aerodynamic duties for the Malaysian-owned Lotus team at the Imperial War Museum runway at Duxford (UK).

Following a successful testing programme in Barcelona and Jerez last month, British team Arden International confirmed that Nabil Jeffri and Jimmy Eriksson have signed for the 2016 Season. Nabil moves from Germany and European F3 where he has spent the last few years honing his skills and experience around the European tracks. The Malaysian is also no stranger to the Sepang International Circuit, where the GP2 Series will be racing later this year alongside Formula One.

“This has been my lifelong dream and I am living it out in front of my fellow Malaysians – that is an adrenaline rush like no other. The Sepang Circuit is one many drivers find challenging, so I hope my experience on this track will help my performance, and I will do Malaysia proud.  I hope Malaysians will come out to the circuit on race weekend and support both Akash and myself,” said Nabil.

Racing for Swiss-based team Jenzer Motorsport in GP3 this year, Akash Neil Nandy, 19, is a rising Malaysian star in his own right. He was recently awarded the McMillan Woods Rising Star Award 2016, in the Chequered Flag of the Year category.

He began his career in 2010, kart racing at the Rotax Max Challenge Malaysia, finishing a respectable 2nd place.  But his breakout race was when he finished a respectable 3rd place in the overall championship of the Formula Masters China Series in 2013. The wins kept on coming, as he almost won the Formula 3 Remus Championship in Europe, winning 10 out of 12 races.

In 2013, at the prestigious Macau Grand Prix event, Akash – one of the youngest drivers that year, made motorsports history that same year after grabbing pole position, setting the fastest lap and winning in Formula Masters, when the highly respected season ended.

Akash’s extraordinary talent won him an invitation to participate in the prestigious opening round of the Asia Le Mans Series with KC Motorgroup in 2013. Being the youngest driver to participate in a Le Mans Series, he walked into the history books of the event and Le Mans overall. Having qualified to start the race from P2, Akash steamed the team into P1 while closing his stint of the race, having set one of the fastest lap times and maintaining the position to finish as race winners. This year, Akash did his team proud by emerging overall champion in 1st place yet again in the GTM class on home ground.

He stands amongst the likes of former F1 world champions Ayrton Senna and Michael Schumacher who were once overall championship winners. Apart from his dedication and passion for racing, Akash is also a full-time law student and is currently close to completing his first year.

“I am honoured to be part of our national racing agenda and that my love for racing will be an inspiration for all young Malaysians to strive tirelessly to achieve their dreams and goals. I am always determined to give my very best every time I am on the track and hope that I will make Malaysia proud in the upcoming race,” shared Akash.

“It is exciting times for motorsports in Malaysia, as the young sportsmen who have worked their way up the ranks of talent development series start to flourish and make their names known in the senior levels,” said the Minister of Youth and Sports Khairy Jamaluddin. “I am calling out to private sector companies to come forward and look at the viability of sponsoring our local drivers,” he urged. “Motorsports in particular is an expensive endeavour but returns for sponsors are exponential,” he said.

The 2016 Formula 1 Malaysia Grand Prix takes place from 30 September until 2 October 2016, at Sepang International Circuit with GP2 and GP3 being the support races for the event. Early Bird promotional ticket prices are still available until 31 May 2016.

For information on this event and ticketing, call the Ticket Hotline at 03-8778 2222 or visit Sepang International Circuit’s website at http://www.sepangcircuit.com/