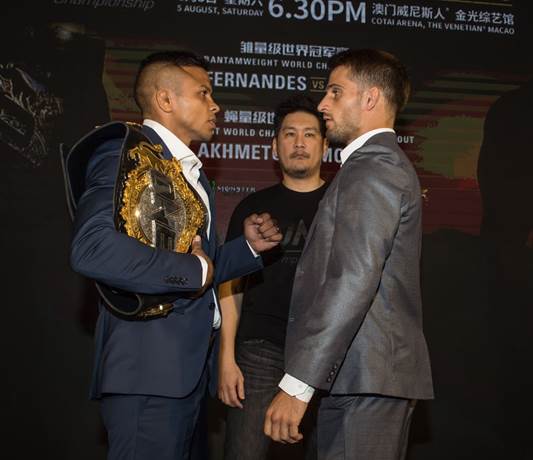 03 August 2017 – Macao, China: The largest sports media property in Asian history, ONE Championship™ (ONE), recently held a blockbuster kick-off press conference for ONE: KINGS & CONQUERORS at the Sicily Room at The Venetian Macao in Macao, China. In attendance was Chairman and CEO of ONE Championship, Chatri Sityodtong as well as reigning and defending ONE Bantamweight World Champion Bibiano “The Flash” Fernandes of Brazil, and his opponent, world title challenger Andrew Leone of the United States.

Chatri Sityodtong, Chairman and CEO of ONE Championship, stated: “It is my honor and my pleasure to see some of the greatest martial artists on the planet compete in ONE Championship. The thing that makes ONE Championship different from any other organization in the world, is that we want to build and unleash martial arts superheroes to ignite the world with inspiration, hope, dreams, strength and courage. Our heroes are role models not only in the cage, but also outside of the cage.”

Andrew Leone, ONE world title challenger, stated: “I just want to thank ONE Championship. It’s amazing what the organization is doing in Asia. They’re really building heroes. Bibiano [Fernandes] has been a champion for a long time. I respect him. It’s going to be a tough night but I’m looking forward to it. I’m going out on Saturday to try to win a world championship.”

Kairat Akhmetov, ONE Flyweight World Champion, stated: “I want to thank everyone who helped me prepare for this fight — all my teammates, my gym. I’ve been away for a long time. Now that I’m back, I have become a better fighter. I’m ready to showcase my new skills. I believe it’s going to be a good and exciting fight with Adriano [Moraes].”

Adriano Moraes, ONE Interim Flyweight World Champion, stated: “I’m so glad to be here. This is my second time to be in Macao. The last time I was here in Macao, it was a wonderful night for me when I brought this belt back to Brazil. I don’t know if you have seen my last fight with [Kairat] Akhmetov, but I think I won that fight. This time I will show the world that I am the true champion. ”