(SUKAN) ONE CHAMPIONSHIP HOLDS ONE : WARRIORS OF THE WORLD OFFICIAL FACE-OFF IN BANGKOK 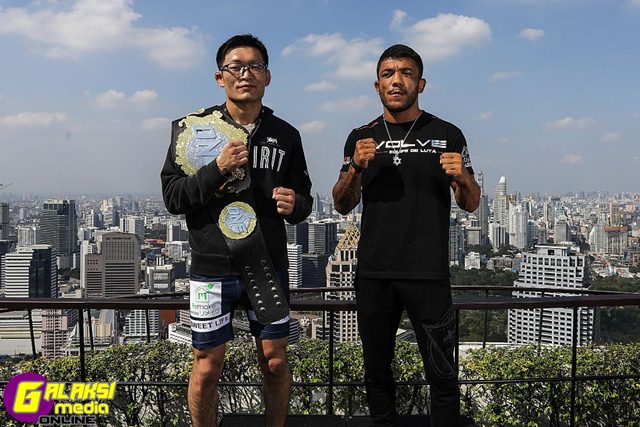 06 December 2017 – Bangkok, Thailand: The largest global sports media property in Asian history, ONE Championship™ (ONE), recently hosted the ONE: WARRIORS OF THE WORLD Official Face-off on Wednesday, 6 December atop the 61st floor of the Vertigo Restaurant in the Banyan Tree Bangkok Hotel in Bangkok, Thailand. In attendance was ONE Championship President of Thailand, Mr. Kamol ‘Sukie’ Sukosol Clapp and main event competitors Yoshitaka Naito and Alex Silva, as well as co-main event competitors Shannon Wiratchai and Rasul Yakhyaev. The rest of the athletes also faced off.

The press conference was held in lieu of all the action which takes place Saturday, 9 December at the Impact Arena, as the absolute best in local and international martial arts talent take the ONE Championship cage to showcase their skills in front of a global audience at ONE: WARRIORS OF THE WORLD.

Kamol ‘Sukie’ Sukosol Clapp, ONE Championship President of Thailand, stated: “ONE Championship is back in Bangkok for another evening of world-class martial arts. This is an exciting one for fans, as ONE: WARRIORS OF THE WORLD is set to feature some of the best and most talented Thai martial arts superstars on the biggest stage of global competition. Fans will not want to miss all the action that goes down at the Impact Arena on Saturday night. Get ready as we have an amazing card prepared for you all!”

Yoshitaka Naito, ONE Strawweight World Champion, stated: “Hayato [Suzuki] is known as one of the best wrestlers in Japan, so I was shocked to see him lose against a jiu-jitsu champion. Alex Silva’s grappling is extremely good. Silva’s strength is of course his ground techniques, but his striking is probably not a big threat. Silva has never gone five rounds, so if it goes the distance, it will be my time. I am confident in my abilities and that I will successfully defend my belt.”

Alex Silva, ONE Title Challenger, stated: “It is most important that before you are even a champion, that you have a good personality, and a good character. You need to be humble. That is how I want to inspire people. That is very important to me. I think that is what has brought me to where I am today — being humble and having a good character, whether you are a champion or not. I am grateful for the opportunity to challenge for the title, and will do my best to take home the win on Saturday night.”

Shannon Wiratchai, ONE Athlete, stated: “Competing in front of my hometown fans is always a great pleasure, and huge pressure at the same time. Life is all about changing. In every change there is always an opportunity. Rasul is dangerous everywhere. But I think I can handle him on the feet. Chechen wrestlers are always some of the best in the world, but I have wrestled with many high-level wrestlers. 2017 is a year that I have been working very hard. I hope I win this match, and 2018 will be another year that I keep working hard. Not just for myself, but for Thai martial arts.”

Rasul Yakhyaev, ONE Athlete, stated: “My defeats taught me to take more care of myself — of my health, my diet, and my training schedule. Shannon is a decent athlete with a lot of experience in the cage. I have not watched all of his matches, but I am sure I can win. I have the complete skill set to achieve victory. Shannon is going to be a tough challenge, but I wish him to have a good training camp with no injuries. When the big day comes, one of us must win and one will lose. I will be the one who wins.”

Reigning and defending ONE Strawweight World Champion Yoshitaka “Nobita” Naito of Matsudo, Japan, is unbeaten in his professional career with a perfect 12-0 record. He owns six victories by submission and one by knockout. The 33-year-old, who made a name for himself at Japan’s world famous Korakuen Hall competing for Shooto as its Flyweight Champion, captured the ONE Strawweight World Championship by submitting Dejdamrong Sor Amnuaysirichoke in his promotional debut in 2016. Naito makes the second defense of his strawweight belt against Alex Silva.

Alex “Little Rock” Silva of Sao Paulo, Brazil, is a second-degree black belt and Brazilian jiu-jitsu world champion feared for his relentless pursuit of submission finishes. Silva is riding high on a five-bout winning streak, rapidly climbing ONE Championship’s stacked strawweight ranks. He is a technical grappling specialist with a penchant for securing highlight-reel submissions. With steadily increasing confidence, Silva’s last five victories have all ended in spectacular fashion. In his most recent contest, Silva made quick work of the highly-regarded and previously unbeaten Hayato Suzuki, earning him an opportunity for the ONE Strawweight World Championship.

Shannon “OneShin” Wiratchai of Thailand is one of the most thrilling offensive innovators in ONE Championship. The creator of the OneShin Striking System, Wiratchai developed his own style which incorporates various elements from Muay Thai, boxing, wrestling, and Brazilian jiu-jitsu. Training out of Tiger Muay Thai and Bangkok Fight Lab, Wiratchai emerges as Thailand’s biggest and most exciting martial arts star. In his last bout, Wiratchai made quick work of Rajinder Singh Meena, stopping his foe with a knee to the abdomen in less than 30 seconds into the first round. Wiratchai seeks to continue his winning ways as he faces Rasul Yakhyaev in the co-main event of the evening.

26-year-old Rasul Yakhyaev of Grozny, Russia, is a lightweight who has racked up a solid following over his seven-year professional career. A jiu-jitsu and combat sambo practitioner, he is adept in both striking and mat techniques, and is considered a solid contender with tremendous combat skills. A well-rounded warrior, four of Yakhyaev’s victories have come by submission while three have come by knockout. After establishing a name for himself in Eastern Europe, he made his ONE Championship debut in December of 2015, and now seeks to take his career to the next level against Shannon Wiratchai.