(SUKAN) ONE FIGHTING CHAMPIONSHIP™, POWERED BY TUNE TALK, RETURNS TO KUALA LUMPUR ON 17 OCTOBER WITH ONE FC: ROAR OF TIGERS 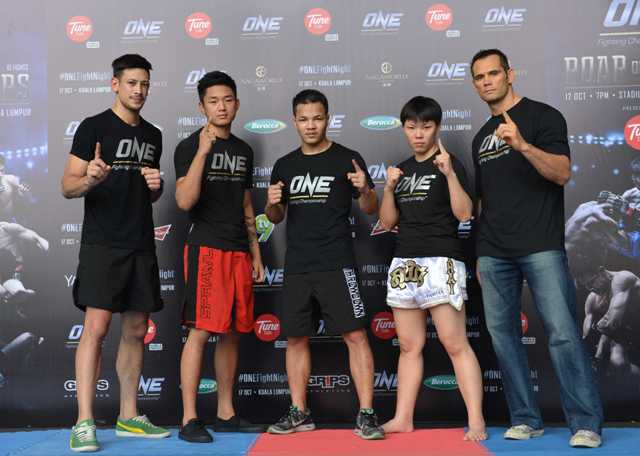 Asia’s largest mixed martial arts organization with a 90% market share, ONE Fighting Championship™ (ONE FC), powered by Tune Talk, returns to Kuala Lumpur, Malaysia, for another blockbuster event on 17 October 2014 at the historic Stadium Putra. The fight card will feature a main event clash between two top featherweights in Marat Gafurov and Rob Lisita. Malaysia’s Ev Ting meets Philippines’ Edward Kelly in the co-main event. A bout between Singapore’s Stephen Langdown and Malaysia’s Raymond Tan has also been added to the card.

Fight fans have been eagerly awaiting the return of ONE FC to Kuala Lumpur after closely following the intense, non-stop, adrenaline-pumping action that has accompanied the promotion throughout its multi-city tour this year. The wait is finally over and Malaysian fans will once again be treated to yet another night of world-class mixed martial arts action.

Priority sales of tickets for ONE FC: ROAR OF TIGERS, presented by Tune Talk, is currently available till 10 September. Fans can enjoy 30% off tickets during priority sales. Log on to www.AirAsiaRedTix.com for further details.

CEO of ONE Fighting Championship™ Victor Cui stated, “We are coming back to the capital of Malaysia to put on one of the greatest fight cards the city has seen to date. ONE FC is putting together a fight card that will blow away the millions of passionate fight fans all around the world. Marat Gafurov and Rob Lisita are two of the best featherweights in the world. Both of them have a penchant for putting on exciting battles, and I think the fans will be in for a treat. We are also extremely excited to have Tune Talk as an official partner of ONE FC once again. Tune Talk has been actively promoting the growth of mixed martial arts in Malaysia together with ONE FC and with their partnership, we are set to bring another massive event to Kuala Lumpur with ONE FC: ROAR OF TIGERS!”

Marat Gafurov is undefeated after 8 fights, having emerged as the top featherweight in Europe. He possesses vicious ground and pound that has led him to six spectacular finishes so far. Prior to signing with ONE FC, he was the reigning M-1 Global Featherweight Champion. He joins an exciting Featherweight division that is currently ruled by Jadambaa Narantungalag. Gafurov will be looking to earn himself a title opportunity in the near future.

Rob Lisita is an Australian featherweight who has been on a tear in recent bouts. He has won seven of his last nine contests. Lisita is ruthless in going for the finish and has seen the final bell only three times in his 14 victories. One thing you cannot deny is that Rob Lisita always brings the action to the cage. He’s constantly looking to finish his opponent any chance he can get and fans can be sure of another stunning performance from the Australian.

Ev Ting is regarded as one of Malaysia’s top MMA fighters.  Ting is of Malaysian Chinese ancestry but his family relocated to New Zealand when he was seven years old. It was an MMA highlight reel that he discovered on the internet that first sparked his interest in training in the sport, and he quickly found a home at Auckland MMA in 2009. After an undefeated stint as an amateur, Ting made his professional debut in 2011 and has since won seven of nine bouts. Ting made a successful ONE FC debut by knocking out Yohan Mulia Legowo in June and now gets the opportunity to compete in his country of birth for the first time.

Edward Kelly is one of the brightest prospects to come out of the Philippines, and boasts an impressive record of five wins and one loss in his fledging career. The brother of ONE FC featherweight #1 contender Eric Kelly, Edward possesses many similar traits as his brother, such as the relentless pursuit of the finish as well as being multi-faceted and able to emerge on top in every situation.

Raymond Tan is a founding member of Penang Top Team and is ranked as one of the best bantamweights in Malaysia. He initially began training in Taekwondo before he moved into mixed martial arts as he grew older. The lanky Tan boasts one of the longest reach in both his punches and kicks in the Bantamweight division and will leverage that advantage against Langdown.

Stephen Langdown returns to the ONE FC cage to take on Tan. Langdown is equally adept at both striking and grappling. He is a very solid, well-rounded fighter who is looking to catapult himself into the top of his division. The bout between Langdown and Tan features a clash of two of the top prospects in ONE FC and both mixed martial artists will be determined to prove themselves.

Fans around Asia can catch all the action live on STAR Sports. Check your local listings. Also, fans from around the world can witness the action online via live streaming at www.onefc.livesport.tv. The first two undercard fights are available for viewing free-of-charge and the main card fights will be available for purchase at just US$9.99.