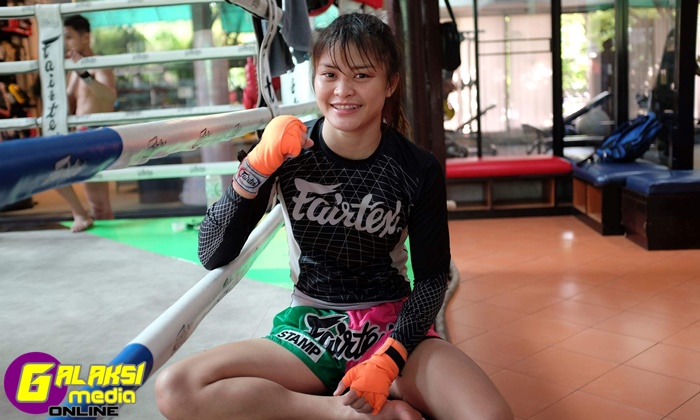 4 October 2018 – Bangkok, Thailand : Born into a family of fruit farmers, Stamp Fairtex knows the meaning of hard work. Competing since the tender age of five, the 20-year-old from the Rayong Province has already amassed over 100 bouts in her 15-year career.

In fact, it was her work ethic that brought her to becoming the first-ever sponsored female Thai athlete at Fairtex Training Center in Pattaya.

Stamp will soon embark on one of her greatest challenges when she looks to dethrone current ONE Kickboxing Atomweight World Champion “Killer Bee” Kai Ting Chuang at ONE: KINGDOM OF HEROES, which is set for Saturday, 6 October in Bangkok, Thailand.

“This will be the biggest fight of my career. Everyone wants to be a world champion. The ONE Super Series has the best in the world from all striking disciplines, including Muay Thai,” she said at the open workouts yesterday.

Stamp will be the second female Nak Muay (Muay Thai practitioner) to take part in the ONE Super Series, but she has had to overcome a lot of cultural expectations to get to where she is today.

“The hardest thing was overcoming female stereotypes,” she says.

“In Thailand, female Muay Thai athletes were not very culturally accepted. Females are viewed as weak and are expected to act ladylike.

“Every female who became a Muay Thai athlete has her passion. They want to be recognized, but in fact, they are not accepted by society.”

Now, with the rise of female Muay Thai, Stamp is as determined as ever to win the World Title in hopes of making her family proud.

What Stamp doesn’t realize is that she has become a role model for young girls in Thailand nationwide, and not just Muay Thai practitioners.  With her debut on the global stage for martial arts, she will make a statement to the world that Thai female athletes are strong, capable individuals.

Coming from an impoverished background only adds to her story and the adversity she has had to overcome.  What’s more, Stamp is set to enter this contest having never competed in kickboxing before.

Stamp trains on average 30 hours a week and runs nearly 10 kilometers a day, six days a week.  Regularly sparring with her male peers at the gym, she also does daily pad rounds with her trainer and supervised rounds on the bag.  On top of her already intense training regime, she also works with a strength and conditioning coach.

This coming Saturday, the Fairtex representative will finally get to show the world her dedication not just to martial arts, but to herself as a professional athlete.  And when she does, thousands, if not millions, of Thai girls will be there with their faces glued to the screen cheering on their female Muay Thai idol.

Tags: Is A Front Runner For, Muay Thai’s Next Big Female Star, ONE CHAMPIONS, Stamp Fairtex
← (SUKAN) RICH FRANKLIN’S ONE WARRIOR SERIES TO HOLD LIVE EVENT ON 11 OCTOBER IN SINGAPORE
(SUKAN) SRISAKET SOR RUNGVISAI AND IRAN DIAZ MAKE WEIGHT AHEAD OF ONE: KINGDOM OF HEROES →