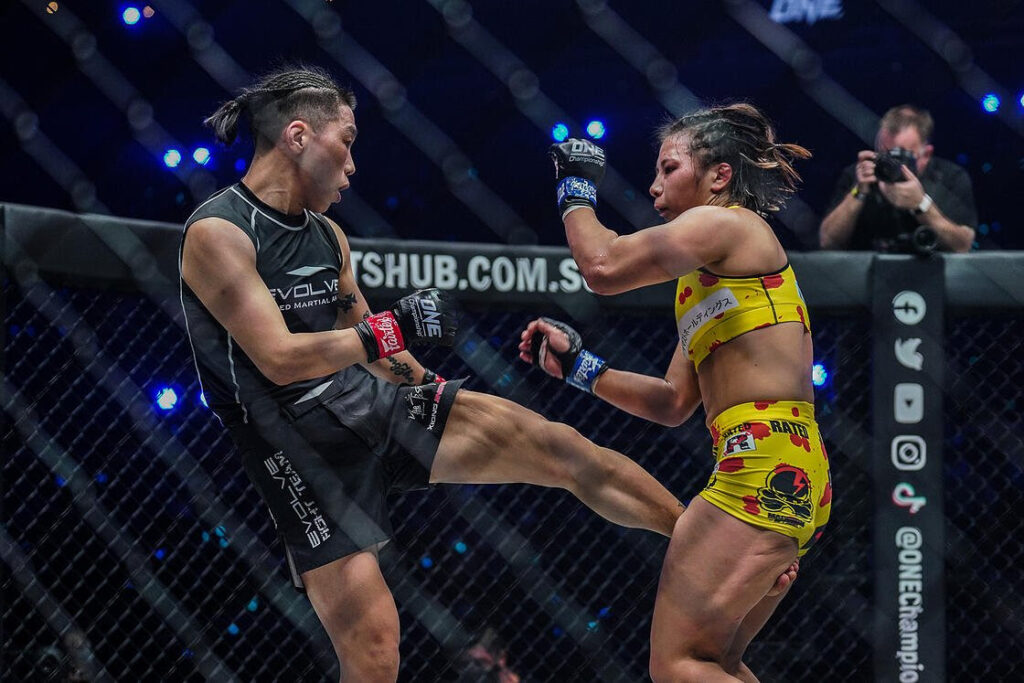 14 January 2022 – Singapore: ONE Championship™ (ONE) kicked off the new year with ONE: HEAVY HITTERS, which aired live from the Singapore Indoor Stadium. The eight-fight card featured a battle for the ONE Women’s Strawweight World Title, a Muay Thai showdown between Thai phenoms, and the debut of Khabib Nurmagomedov’s protege, Saygid Izagakhmaev, among other exciting martial arts contests.

In the main event, reigning ONE Women’s Strawweight World Champion Xiong Jing Nan retained her World Title with a comprehensive unanimous decision victory over #4-ranked strawweight Ayaka Miura. In the process, the most dominant women’s World Champion in the promotion successfully defended her belt for the sixth time.

Chinese superstar bombarded Miura with a plethora of boxing combinations early, as her power earned the Japanese challenger’s respect. Miura tried to bring the action to the ground on multiple occasions across five rounds, but with no success. Xiong exhibited incredible takedown defense from start to finish and cruised to a flawless victory.

In the co-main event, rising star Tawanchai upset #1-ranked bantamweight Muay Thai striker Saemapetch, dismantling his Thai compatriot in the first round while scoring two knockdowns. Tawanchai showcased his superior speed early, stifling Saemapetch with fast and powerful punches and kicks that forced the former World Title challenger onto the back foot. A glancing left hand sent Saemapetch to the canvas, but he got up and beat the mandatory eight-count. Another furious combination from Tawanchai soon after sent Saemapetch down for the last time, as the referee waved off the contest.

Khabib Nurmagomedov’s protege, Saygid Izagakhmaev, announced his arrival on the global stage of ONE Championship by dominating former ONE World Title challenger James Nakashima to win via second-round submission. Nakashima was effective with his striking to start the fight, but Izagakhmaev soon found his range and successfully brought the action to the ground. In the second round, Izagakhmaev effortlessly took Nakashima to the mat, ending matters with a head and arm triangle choke.

Teen striking sensation Supergirl outlasted veteran Ekaterina Vandaryeva, overcoming a spirited effort from the Belarusian to win a closely contested split decision after three rounds. Supergirl was aggressive in the first frame, pushing the pace with her combinations as her opponent backpedaled. Vandaryeva returned fire with sharp counters, coming alive in the second round where she unloaded a barrage of wild hooks. In the third stanza, the 18-year-old did just enough to earn the victory, moving forward with effective pressure.

Dangerous Japanese veteran Senzo Ikeda put forth a blistering pace, battering rising star Elipitua Siregar with fiery combinations en route to a scintillating knockout victory. Siregar showcased his high-level grappling early, but Ikeda was relentless with his forward pressure throughout the fight. A well-placed body shot crumpled Siregar in the third and final round, as the referee called a halt to the contest.

In a ONE Super Series kickboxing contest, light heavyweight sensation Giannis Stoforidis stunned Beybulat Isaev, scoring a 31-second knockout. Stoforidis and Isaev wasted absolutely no time as they traded strikes at the center of the Circle from the opening bell. In a rare sequence, the two fighters sent each other to the canvas by connecting with simultaneous left hooks. Isaev was unable to regain his feet, and Stoforidis was awarded the stoppage victory.

In the lead card, Shuya Kamikubo remained unbeaten in ONE Championship as he extended his streak to nine straight wins by defeating highly regarded bantamweight Troy Worthen. And #1-ranked women’s strawweight contender Tiffany Teo dominated Meng Bo on the mat to win by second-round submission.

ONE Championship Chairman and CEO Chatri Sityodtong revealed in the post-event interview that Izagakhmaev and Vandaryeva each earned ONE: HEAVY HITTERS US$50,000 bonuses for their performances.