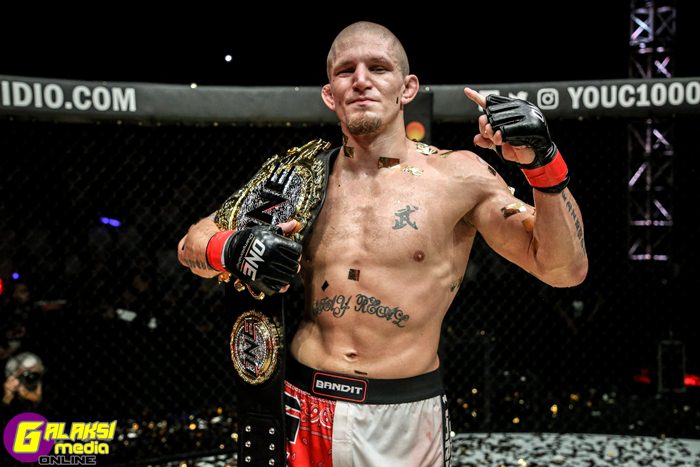 17 November 2018 – Jakarta, Indonesia: The largest global sports media property in Asian history, ONE Championship™ (ONE), electrified the Stadium Istora with another evening of world-class martial arts action. Indonesia’s bustling capital city of Jakarta played host to ONE: WARRIOR’S DREAM, which featured the absolute best in local and international martial arts talent. In the main event, Zebaztian Kadestam was crowned the new ONE Welterweight World Champion after knocking out opponent Tyler McGuire.

In the main event of ONE: WARRIOR’S DREAM, Zebaztian “The Bandit” Kadestam fully realized his dream of becoming a mixed martial arts world champion, stopping Tyler McGuire of the United States to capture the vacant ONE Welterweight World Championship. From bell to bell, Kadestam picked McGuire apart with his striking superiority, jolting his American opponent with thunderous high kicks and solid right hands. Although McGuire was consistent in his relentless pursuit of takedowns for the majority of the contest, Kadestam held his composure, and showcased great grappling defense. In the final moments of the fifth round, Kadestam uncorked a power right hand to knock out McGuire, taking home the ONE Welterweight World Championship.

In the co-main event, multiple-time kickboxing world champion Nieky “The Natural” Holzken announced his arrival on the ONE Super Series stage with a highlight-reel knockout win over Brazilian Cosmo “Good Boy” Alexandre. The Dutch striker punished Alexandre with a flurry of pin-point punches and kicks, leading to a pair of knockdowns in the first round. It was Holzken’s hands that proved to be the difference however as he unloaded a combination in the dying seconds of the second round that was capped off by a well-placed uppercut that shut Alexandre’s lights out for the spectacular ONE Championship debut.

Crowd favorite Priscilla Hertati Lumban Gaol put on an all-around dominant performance to defeat Angelie “D’Explorer” Sabanal of the Philippines via unanimous decision. Feeding off the energy of the raucous crowd in Jakarta, Gaol picked Sabanal apart in the stand-up department, while also staying one step ahead when the action went to the ground. In the third round, Sabanal attempted a last-ditch effort to steal the win with a submission but to no avail, as Gaol held on for the convincing decision win.

Japanese grappling ace Hayato Suzuki put on a ground-game clinic, dispatching Thailand’s Pongsiri “The Smiling Assassin” Mitsatit via submission in the first round. Suzuki scored on an early takedown and immediately imposed his will on the ground, looking to finish off Mitsatit with the ‘Passion Lock’. With Mitsatit being able to defend the first submission attempt, Suzuki transitioned into a rear naked choke and forced the tap.

Muay Thai superstar Lerdsila Phuket Top Team got the better of Cambodia’s Sok Thy, emerging victorious via unanimous decision in their ONE Super Series Muay Thai rematch. Lerdsila was firing on all cylinders, as the three-division Rajadamnern Muay Thai World Champion used his crisp striking to overwhelm Sok Thy. Leaving no doubt this time around, Lerdsila earned the clear-cut decision victory after three rounds of action.

Dutch-Indonesian martial artist Anthony “The Archangel” Engelen had himself another quick night as he finished off Jimmy “The Silencer” Yabo of the Philippines with a first-round submission victory. Just a week after his scintillating knockout win in Singapore, Engelen showcased his ground game this time as he took Yabo down with relative ease. Once on the mat, Engelen dominated as he swiftly took Yabo’s back and secured the rear-naked choke, forcing the Filipino to tap out within seconds.

Indonesia’s own Elipitua Siregar managed to keep his unblemished professional mixed martial arts record intact after picking up a second round submission victory over Muhammad “The Spider” Imran of Pakistan in a catch weight contest. After surviving a strong opening round from Imran, Siregar put his grappling skills on display in the second round, taking his opponent down and immediately transitioning into full mount. Moments later, Siregar easily took Imran’s back and locked in a rear naked choke to force the tap.

Indonesia’s Egi Rozten notched a thrilling knockout of opponent Eddey “The Clown” Kalai of Malaysia in the first round, which drew cheers from the hometown crowd. The two boxing stylists were expected to put on a striking performance, but Kalai surprisingly took matters to the ground in the opening moments. Back up on the feet however, Rozten would shine and land a powerful overhand right that turned the lights out on Kalai as referee Yuji Shimada stepped in to call a halt to the contest.

In an action-packed clash of top bantamweight talents, South Korea’s Dae Hwan “Ottogi” Kim and China’s Zhao Zhi Kang battled through three gruelling rounds that saw both men have their moments. Although Zhao had the edge in height and reach, he wasn’t able to take advantage of the shorter man in Kim who was stronger and crisper with his striking. In the end, all three judges scored the bout in favor of Kim to win by unanimous decision.

Flyweight contender Tatsumitsu “The Sweeper” Wada of Japan scored his first win inside the ONE cage, submitting Eugene Toquero of the Philippines in round one. Wada quickly went to work at the opening bell, landing a series of leg kicks while connecting on a handful of punches. The Japanese grappler however showcased his dangerous submission skills, taking Toquero’s back and forcing the tap from a deep rear naked choke.

Hometown hero Adrian “Papua Badboy” Mattheis of Indonesia sent the crowd into a frenzy with a submission victory over countryman Aziz “The Krauser” Calim. Mattheis looked to trade hands early on, with Calim opting to use his grappling. In the second round, Mattheis saw an opportunity to pull guard on a standing guillotine. Moments later, Mattheis forced the tap.

In a ONE Super Series Muay Thai contest, Brown Pinas of the Netherlands scored a scintillating knockout victory over game but outclassed opponent Yohann Fairtex Drai of France. After a spirited first round of action which saw both men land significant strikes, Pinas ended matters abruptly in the second. Known for his sharp spinning back elbows, Pinas landed one right on the button and Drai was unable to recover.

Multiple-time Brazilian jiu-jitsu world champion Bruno Pucci of Brazil made a triumphant return to the ONE cage, making quick work of opponent “White Dragon” Xie Chao of China. Pucci was determined to bring Xie to the mat early, and he was successful in doing so. Pucci latched onto a guillotine choke, pulled guard and put Xie to sleep.

Kicking off the action at ONE: WARRIOR’S DREAM, local female mixed martial arts prospects Dwi Ani Retno Wulan and Putri Padmi looked to put on a show for fans at the Stadium Istora. After three rounds of action, it was Wulan who emerged victorious, earning a unanimous decision victory from all three judges.