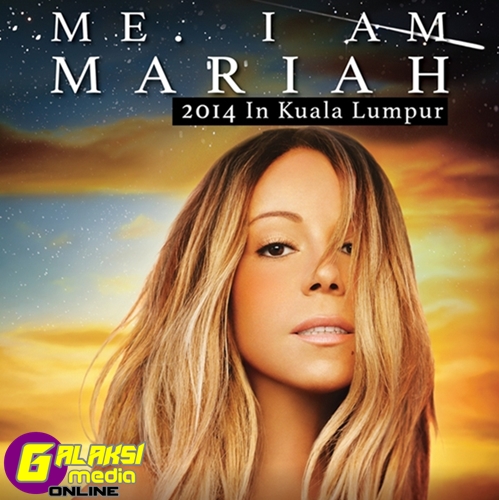 IME Productions proud to announce ‘ME. I AM MARIAH’ Live in Malaysia 2014 will kicking off on 22nd  October 2014, 8p.m. at Stadium Merdeka. After 10 years, Mariah is back on our shores and brings us more hit songs to share this moment! 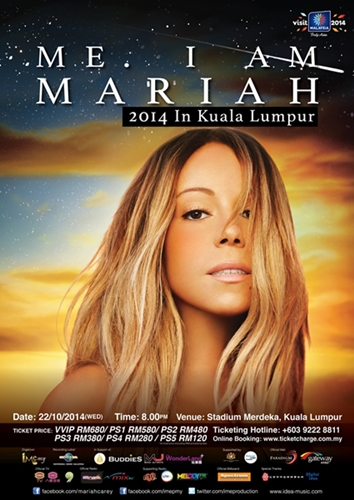 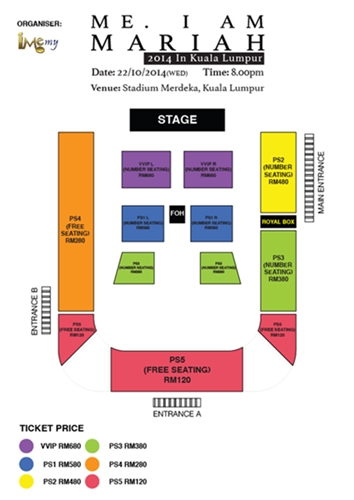 An iconic artiste that needs no introduction, Mariah Carey is the best-selling female artiste of all time with more than 250 million albums sold to date and eighteen Billboard #1 singles (seventeen self-penned) including ‘Fantasy’, ‘Always Be My Baby’, ‘Hero’, ‘Touch My Body’, ‘One Sweet Day’, ‘Without You’, ‘We Belong Together’ and the global smash hit Christmas single ‘All I Want for Christmas Is You’, more than any solo artiste in history. With her distinct five-octave vocal range, prolific song writing, and producing talent, Mariah has defined the modern pop performance. As a singer, songwriter and producer, she has been recognized with five Grammy Awards, nine American Music Awards, Billboard’s “Artist of the Decade” Award, the World Music Award for “World’s Best Selling Female Artiste of the Millennium,” and BMI’s “Icon Award” to name a few.

In 2012, after her post-pregnancy hiatus, she joined the brand new panel for season 12 of the ‘American Idol’ and topped the dance charts worldwide with her smash hit single ‘Triumphant (Get’ Em)’. Mariah also filmed ‘The Butler’, a movie by Lee Daniels. He had previously cast her in the critically acclaimed ‘Precious’, a role which won Mariah unprecedented accolades for her dramatic performance.

This year, Mariah released her fourteenth studio album, ‘Me. I Am Mariah… The Elusive Chanteuse’ by Universal Music. The album features key singles such as ‘Beautiful’ (featuring Miguel), ‘Make It Look Good’ and ‘Camouflage’ have featured prominently on music charts globally.

Malaysia fans can prepare themselves for some mesmerising great time as the unparalleled American songstress showers her love, greatest hits and remarkable new singles to millions of people who have adored her widely acclaimed songs.