(SUKAN) 4 Reasons Why You Cannot Miss ONE: CENTURY 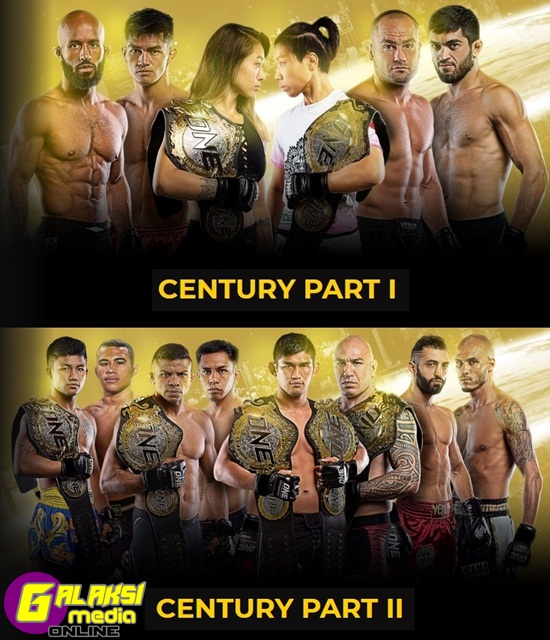 ONE Championship’s 100th blockbuster show – ONE: CENTURY – looks marvelous. The single biggest World Championship event in the history of martial arts will electrify fans around the globe on Sunday, 13 October in Tokyo, Japan.

This ultra-stacked card, broken down into PART I and PART II, offers 22 bouts and features 28 World Champions eager to deliver the best combat sports action you have ever seen.

Here are four reasons why you cannot miss this historical event in martial arts history.

Showdown Of The Century

PART I kicks off in the morning while PART II takes centerstage in the evening. Both segments of the spectacle will see various World Titles on the line.

In PART I, “Unstoppable” Angela Lee defends her ONE Atomweight World Title against strawweight queen “The Panda” Xiong Jing Nan.

In PART II, Aung La “The Burmese Python” N Sang defends his ONE Light Heavyweight World Title against Brandon “The Truth” Vera, while Kevin “The Silencer” Belingon tries to quiet Bibiano “The Flash” Fernandes for his Bantamweight World Title.

Not to mention, with these elite grapplers coming from various styles and backgrounds, there will be a notable difference in submission and transition methods, so keep those eyes glued to the action.

Asia has been the home of martial arts for almost 5,000 years, and as always, ONE Championship celebrates this by including three different sports over the two events – mixed martial arts, Muay Thai, and kickboxing.

Fans of “the art of eight limbs” can rejoice as ONE Flyweight Muay Thai World Champion Rodtang “The Iron Man” Jitmuangnon defends his belt against Brazilian Walter Goncalves.

To top it off, the winner of the prestigious ONE Featherweight Kickboxing World Grand Prix will be determined when Giorgio “The Doctor” Petrosyan and Samy “AK47” Sana square up in the Circle.

ONE Championship’s partnership with Pancrase and Shooto comes to fruition as the spectacle hosts World Championship bouts with athletes from both organizations.

Expect fireworks with the addition of these new athletes who will compete under the ONE banner for the very first time.

With all this in place, ONE: CENTURY is set to be the single greatest martial arts event in the last 100 years.

Top 5 Performances From The Heroes Of ONE: CENTURY PART I

Top 10 Submissions From The Stars Of ONE: CENTURY PART I

7 World Titles Will Be On The Line At ONE: CENTURY

Tags: 4 Reasons Why You Cannot Miss .ONE: CENTURY, ONE CHAMPIONSHIP™
← (HIBURAN) THE BEE IS IN SEARCH OF MALAYSIA’S HIDDEN TALENTS!
(SUKAN) ONE CHAMPIONSHIP PARTNERS WITH VASELINE IN SHINE ‘HEALING CHAMPIONS’ CAMPAIGN →