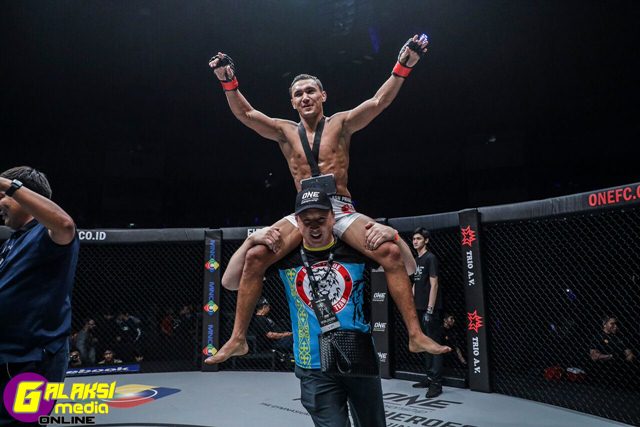 16 September 2017 – Jakarta, Indonesia: The largest sports media property in Asian history, ONE Championship™ (ONE), once again electrified Jakarta, Indonesia with another evening of world-class martial arts action. The packed Jakarta Convention Center played host to ONE: TOTAL VICTORY, which showcased the world’s best martial artists inside the ONE Championship cage. In the main event, former ONE Flyweight World Champion Kairat Akhmetov scored a close three-round split decision victory over the Philippines’s Geje Eustaquio. 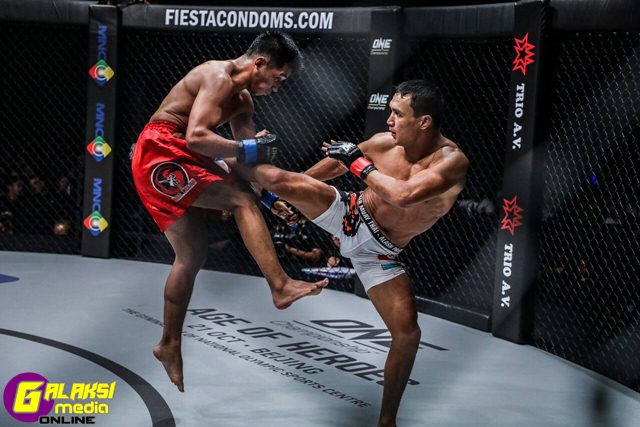 In the main event of ONE: TOTAL VICTORY, former ONE Flyweight World Champion Kairat Akhmetov scored a huge triumph over top flyweight contender Geje “Gravity” Eustaquio of the Philippines, coming away with a closely-contested split decision victory. Akhmetov showcased his overwhelming Greco Roman wrestling chops to consistently bring Eustaquio to the canvas, controlling the action on the ground. Eustaquio would land his usual crisp, clean combinations throughout the contest, but it wasn’t enough to earn him the win as Akhmetov’s grappling proved too much to overcome. In the end, Akhmetov emerged the victor on two of the three judges’ scorecards to earn him the split decision.

Hometown hero, the undefeated Stefer Rahardian continued his winning ways inside the ONE Championship cage, finishing Cambodian opponent Sim Bunsrun in just a little over a minute into the first round. Rahardian, who was just recently awarded his Brazilian jiu-jitsu brown belt, jumped on Bunsrun’s back as soon as he recognized the opening and slithered his way into a deep rear naked choke. Bunsrun tried valiantly to fight off the submission, but it was securely in place and the Cambodian had no choice but to tap out.

In the fastest finish in ONE Championship heavyweight division history, Alain “The Panther” Ngalani obliterated former ONE world title challenger Hideki “Shrek” Sekine in just 11 seconds, scoring an emphatic win in front of a roaring Jakarta Convention Center crowd. As Sekine charged recklessly towards Ngalani at the sound of the opening bell, Ngalani stepped back and uncorked a right hand counter right on the jaw that dumped Sekine to the ground, ending the bout in abrupt fashion.

In a battle of former ONE world title challengers, former professional boxer Roy Doliguez of the Philippines stopped Yago Bryan of Brazil to win by third round technical knockout. It was gruelling contest from start to finish, as both competitors were very evenly matched. Doliguez, operating behind his world-class boxing stance, would keep Bryan on the outside with fast kicks and punch combinations. Although Bryan would land the cleaner, stronger punches throughout the bout, Doliguez soon began to find his range late into the contest. A straight left hand down the middle felled Bryan in the third round from which he was unable to recover. 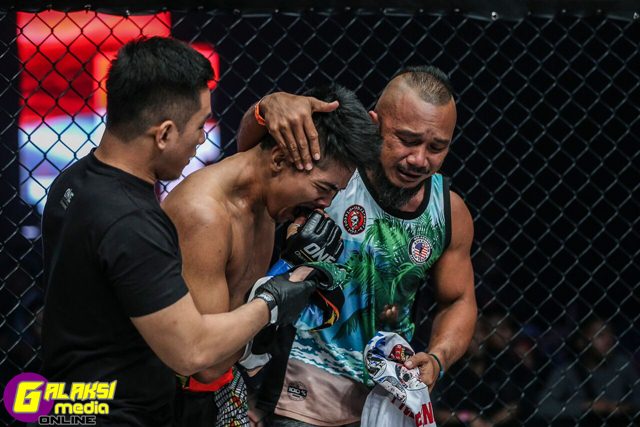 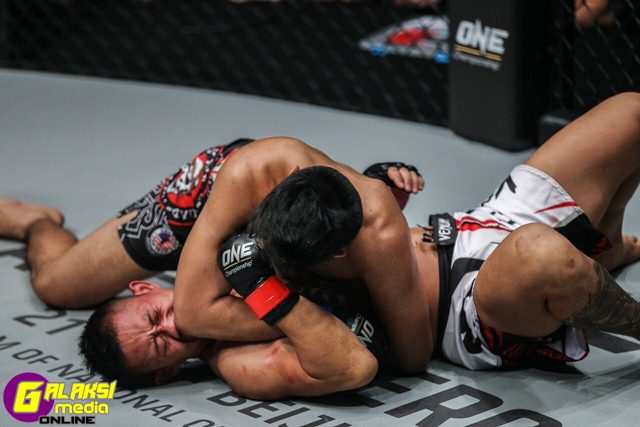 Malaysia’s Hisyam Samsudin showcased incredible grit and toughness as he overcame a furious start from Indonesia’s Jeremy Meciaz to win by technical knockout. Meciaz stormed out of the gates wanting to engage as he chased Samsudin all across the cage. Samsudin would however weather the early onslaught, and deliver some big blows of his own to force referee Yuji Shimada to call a halt to the contest in the very first round.

Filipino karate practitioner Ramon Gonzales showcased a new grappling dimension to his overall game, finishing Chinese wrestler Liu De Li Ge Ri Hu via arm triangle choke submission. After dominating the first round with his striking, Gonzales was able to take Liu De Li to the mat near the halfway point of the second, where he secured side control and swiftly locked in the choke moments after.

An exciting matchup ensued between local strawweight competitor Adrian “The Papua Badboy” Matheis and Cambodian Khun Khmer warrior Phat Soda. Matheis, who was emotional at the end of the bout, pulled off the impressive win by latching onto a rear-naked choke just past the midway point of the very first round. With no escape, Soda had no choice but to tap out, awarding Matheis the submission victory.

In the second preliminary bout of the evening, Indonesian martial artists Riski Umar and Adi Nugroho sent tremors of excitement throughout the Jakarta Convention Center with a spirited display of striking. As both warriors exchanged heavy blows at the center of the cage, it was Umar who came away with the knockout victory after a thunderous body shot landed, incapacitating Nugroho who slumped to the canvas and was unable to get back up.

Kicking off the action at ONE: TOTAL VICTORY was a catchweight contest between Thai Rithy and Jerome S. Paye. Although Paye wisely looked to take matters to the ground where he would try to neutralize Rithy’s striking advantage, the Cambodian was just not going to be contained. Rithy landed five solid right hands on Paye’s jaw to start the second round, turning the lights out on Paye before he hit the mat.

Official results for ONE: TOTAL VICTORY

Heavyweight bout: Alain Ngalani defeats Hideki Sekine by Knockout at 0:11 minutes of round 1