(SUKAN) ONE CHAMPIONSHIP ATHLETES FACE OFF IN MACAU AHEAD OF ONE: PINNACLE OF POWER 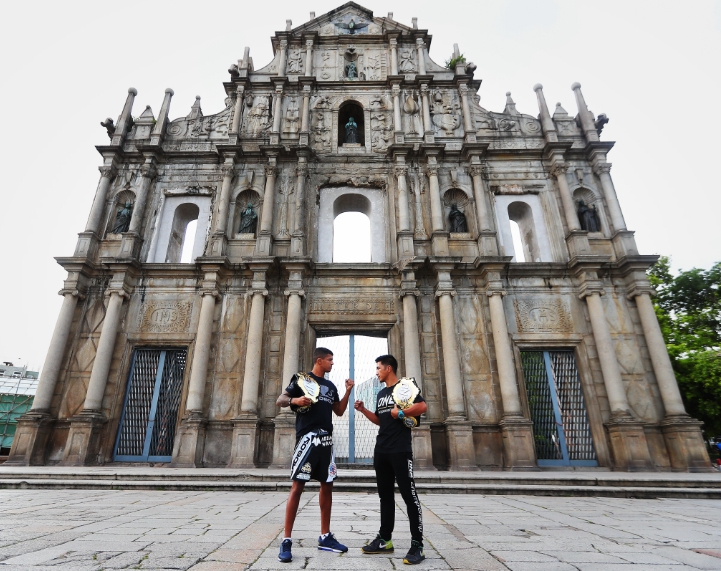 20 June 2018 – Macau, China: The largest global sports media property in Asian history, ONE Championship™ (ONE), recently held the ONE: PINNACLE OF POWER Official Face-Off on Wednesday at the Ruínas da Antiga Catedral de São Paulo in Macau, China. In attendance was reigning ONE Flyweight World Champion Adriano “Mikinho” Moraes of Brazil, as well as opponent ONE Interim Flyweight World Champion Geje “Gravity” Eustaquio of the Philippines. Also in attendance was reigning ONE Women’s Strawweight World Champion “The Panda” Xiong Jing Nan of China, as well as challenger Laura “La Gladiadora” Balin of Argentina.

Ticket information for ONE: PINNACLE OF POWER is available at www.onefc.com.

Adriano Moraes, ONE Flyweight World Champion, stated: “The most important thing in this sport is what we can give back to it. It is a learning journey, and I want to pass my knowledge forward for the future. If I can do this by inspiring fans with my performances, then I am happy. It is all about balance. This Saturday night, I am facing a great warrior in Geje Eustaquio, a man whom I respect as a person and as a competitor in this sport. He is coming with his best, and it is only proper to give him my best performance as well. This is going to be a showdown between two top-level martial artists. May the best man win.”

Xiong Jing Nan, ONE Women’s Strawweight World Champion, stated: “Becoming the ONE Women’s Strawweight World Champion is a dream, and one of the proudest moments of my career. I am happy to represent my country and fight for my fans all over the world. I understand that every challenge from here on will only get harder and tougher, but I am prepared to give it everything I have to remain champion. Laura Balin is a worthy challenger, but I believe my skills will be far too much for her to handle. I am excited to get in there and let my hands go.”

Laura Balin, ONE World Title Challenger, stated: “It is an absolute honor to be here in Macau, competing in the co-main event of this spectacular card. This is my first appearance in ONE Championship and I am going to make the most of it. To everyone watching this Saturday night, get ready because I am going to shock the world. Xiong Jing Nan is a great champion, but I’m here now and I’m coming to take the belt. This is going to be a very exciting fight and I can’t wait.”

All remaining ONE Championship athletes also participated in the face-off photo op. For photos of the ONE: PINNACLE OF POWER Official Face-Off, click here: <LINK>

Catch all the action this Saturday night, 23 June, when ONE: PINNACLE OF POWER goes live around the world from the Studio City Event Center in Macau, China.