(SUKAN) Priscilla Hertati Lumban Gaol Is On A Mission In Jakarta 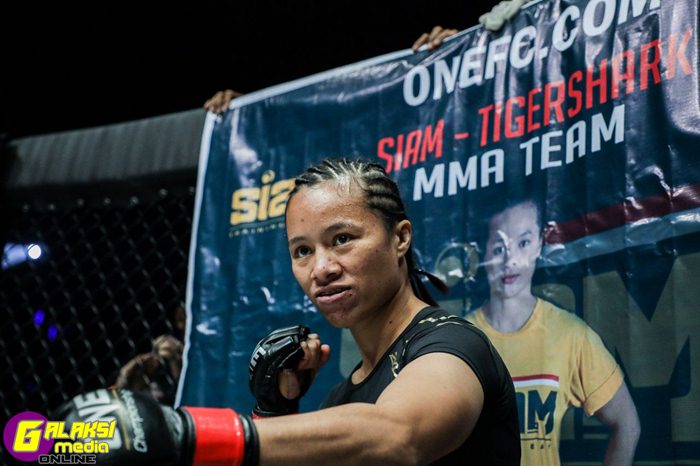 Priscilla Hertati “Thathie” Lumban Gaol ended 2018 dubbed as the most active athlete in ONE Championship winning five of the six matches she participated in. While she is just starting to make a name for herself on the Asian mixed martial arts scene, her achievements over the past 12 months have no doubt made her a quick title contender for the ONE Women’s Atomweight World Championship.

“I am grateful to receive yet another opportunity [to compete] this year, and I hope this could be the start of something great,” Lumban Gaol says in an interview with ONE Championship.

“My only goal is to give the best performance and entertain the home audience with a good win.”

The SEA Games Wushu Bronze Medalist is set to compete in the upcoming ONE: Eternal Glory card at home in Jakarta, Indonesia on 19 January, where a sixth career win would certainly catapult her even further up the ranks.

But Lumban Gaol isn’t banking on title shot at the moment. She realizes she still has a ways to go. Right now, she just wants to use her career as a way to inspire her fellow Indonesians.

In order for that to happen however, she needs to focus on beating fellow international wushu martial artist, Puja “The Cyclone” Tomar.

Tomar has proven herself as a worthy opponent for Lumban Gaol. She has been crowned a multiple-time Indian National Wushu Champion and has also represented her country in the World Championships.

“The Cyclone” made a statement when she put a swift end to her first two professional bouts, winning by first-round knockout. As such, Lumban Gaol is weary of her opponent’s unheralded power.

“Tomar’s strength is definitely her power, but from what I see in her matches, her weakness is the ground game,” says Lumban Gaol.

“The preparation for this year has been all about discipline; I am training a lot harder to get the maximum results.

“My coach instructed me to work more on my stamina, power, and techniques to even the odds.”

With an impressive 2018 filled with dominant finishes against other world title contenders, Lumban Gaol’s plan is to win one match at a time until she reaches the pinnacle of her division. For Lumban Gaol, to be able to challenge Angela “Unstoppable” Lee for the ONE Women’s Atomweight World Title is a dream.

“My only conviction this year is to play strong in each match and improve after every fight, so I can take home the ONE women’s atomweight belt,” Tomar concluded.

“I will always accept as many bouts as possible that God and ONE provide for me. The only target for an athlete is to get the gold and to entertain our fans.”