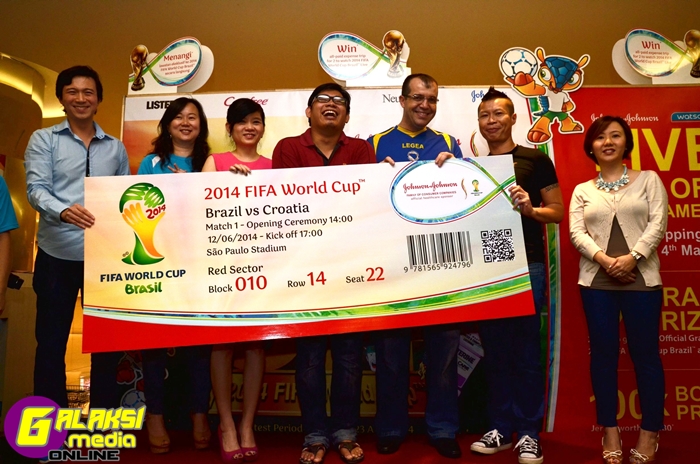 The 2014 FIFA World Cup™ countdown continues at Watsons, as the football fever hype grows among the ardent fans. Celebrating this occasion, Watsons Malaysia has wrapped up an exciting football campaign for members and reward them with money can’t buy experiences.

Under the campaign, titled as Football Fever Sale, Watsons Malaysia has collaborated with Johnson & Johnson to kick off an online Football Game exclusive for Watsons Facebook fans earlier in March. Customers who spend RM25 on Johnson & Johnson products can log on to Watsons Malaysia Facebook page to play the online game and be the top 100 scorers to go to semi finals for a Live Kick Off event. The online contest was from 6 March – 23 April 2014.

The Live Kick Off final event by Watsons and Johnson & Johnson was held from 30th April to 4th May 2014 at 1 Utama Shopping Centre where top 10 players from the online game were invited to compete against each other at the Final LIVE tournament at the event on 3 May 2014. The event also brought greater excitement as various special promotions and football engagement games were organised to engage and reward their customers throughout the event week.

Grand winner to Brazil was announced on the same day and Ezuan Bin Mohammad Abdullah, 22,was overjoyed when he won the Grand Prize of an all paid trip for two (2) to 2014 FIFA World Cup™ Grand Opening Ceremony and Opening Match at Sao Paolo, Brazil. He won the prize after he scored the highest number of goals during the final playoff – 44 goals in 90 seconds.

Ezuan Bin Mohammad Abdullah was thrilled, “As a Watsons VIP member for years, this is the first I won something this big with Watsons. I am ecstatic as I will be experiencing one of the greatest live football matches ever with people around the world. This prize is definitely an invaluable experience only Watsons and Johnson & Johnson can give to anyone!”

Throughout the Football Fever Sale period as well, from 1st April – 23rd April 2014, Watsons Malaysia has also initiate multiple engagement programmes to reach out to its football fans including football celebrity endorsement, contest for fans to be guest on renowned Astro television shows and football fever activities at selected stores.

Watsons also concurrently organised another contest for fans to be guests on prominent Astro television shows, where six football fans will appear on Astro Supersports Football Overload with Reem Shahwa and Astro Arena Bola @ Mamak with Dayang Zainatull to share the limelight with celebrity hosts and talk football with them.