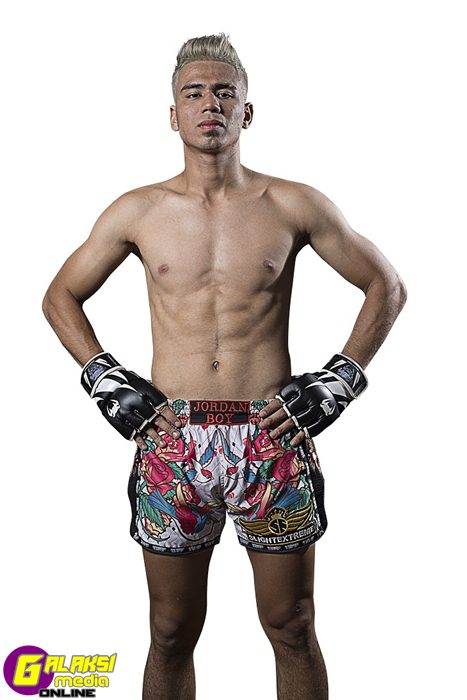 Mohammed “Jordan Boy” Bin Mahmoud has a big goal for his ONE Championship debut On Friday, 7 December, the Malaysian will square off against Stergos “Greek Dynamite” Mikkios in a Muay Thai bantamweight match-up on the preliminary card of ONE: DESTINY OF CHAMPIONS.

Not only does he want to win the bantamweight contest, but the 22-year-old wants to create a highlight-reel moment his countrymen inside Kuala Lumpur’s Axiata Arena will never forget.

“For my first battle, I want to bring the knockout home,” the 22-year-old says.

“This is the biggest match in my career and [it is] in my hometown, Kuala Lumpur. I want to go back home with the best knockout of the night and make my country proud.”

Mohammed is excited about his upcoming ONE Super Series premiere, however, his debut — and budding Muay Thai career, for that matter — almost ceased to happen.

Six years ago, the young Malaysian got his first taste of ‘the art of eight limbs.’

He watched the sport on the computer and TV set, and was instantly allured by the warriors competing inside the ring.

“I started watching Muay Thai since I was 16 years old through YouTube and the television whenever I had the chance,” he recalls.

“After I completed high school, I told my father, Mahmoud Omar, I wanted to join the gym and he encouraged me to do so. He was so excited that he even wanted to drive me to the gym and check it out himself.”

It was a short drive and to his dad’s surprise, it was not a regular fitness center. Instead, it was a facility called Sampuri Muay Thai, located in the city center.

“He was shocked. He thought I was going to a bodybuilding gym to size up my body,” Mohammed says with a chuckle.

“My dad gave me this look in the eyes and told me to make sure I only take part in this on the basis of just practicing the art and not to use it in a ring.”

The Malaysian’s martial arts journey began in mid-2014. He trained five times a week for two hours a day, and it was more challenging than he had imagined.

“It was tough at the start. [We were] mixing lots of cardio with punching and kicking sessions,” he elaborates.

“I only played soccer and was a marathon runner throughout my schooling years, so this was something out of the box.”

Things did not get any easier, as Mohammed’s head coaches Putera Sampuri and Rania Sampuri constantly gave him highly skilled training partners to spar with nearly a month into his Muay Thai education.

“My coaches were giving me tough athletes to train with,” he says. “At times, I felt as though they were trying to chase me away from the gym.”

However, that only brought out the best in “Jordan Boy.”

After holding his own against the gym’s more experienced members, his coaches asked him to compete in an amateur bout.

By this point, Mohammed had only been training for six months.

The young Malaysian was interested in the offer, but initially turned it down, as he had promised his dad he would not use his skills to compete.

“I tried my luck when I got home that night, but my father remained firm on his decision,” he says.

Mohammed’s coaches did not give up, however. After several talks with their student’s father, the duo changed his mind.

“Jordan Boy” trained up to five hours per day for his big match and even slept at the gym on countless occasions.

“I couldn’t sleep and even during the pre-medical check-up, the doctor advised me against fighting,” he explains. “I disobeyed [him] without thinking about the consequences.”

Fortunately, his gamble paid off. Mohammed knocked out his opponent in the first round with a head kick.

“I was so excited and just started doing a weird dance in the ring,” the Kedah-born athlete recalls. “I then looked at my dad and said thank you for believing in me. I shed a few tears in the process, too.”

Since that fateful night, he has compiled a professional record of 30-2-1. Also, he has captured a slew of titles including three Kuda Merah belts, two STAND SABAH kickboxing belts, and one Sampori Muay Thai championship belt.

These achievements were enough to impress the world’s largest martial arts organization.

“My dad told me ONE Championship wants me to be part of their ONE Super Series, and I did not believe him,” the Malaysian admits.

“He then showed me the text message (ONE Championship executive) Ann Osman sent to him, and I literally started running around my house in excitement.”

Mohammed’s first assignment is a difficult one, as he will meet the veteran Mikkios at ONE: DESTINY OF CHAMPIONS in a bantamweight tilt. To make matters more challenging, the pair will strap on 4-ounce mixed martial arts gloves.

Despite this, “Jordan Boy” is ready for it all — his promotional debut, wearing the smaller gloves, and even retiring to the locker room and watching the night’s main event.

He is just as excited to see the legendary Yodsanklai IWE Fairtex collide with Australia’s Luis Regis in the headline attraction.

“I’ll be keeping an eye on that fight as one of the sport’s greatest ever will be taking part in it,” he confesses. “It’s also such an honor to make my debut on a card that features him.”

After a tough beginning in his Muay Thai career, Mohammed looks forward to a dream start in ONE Championship.