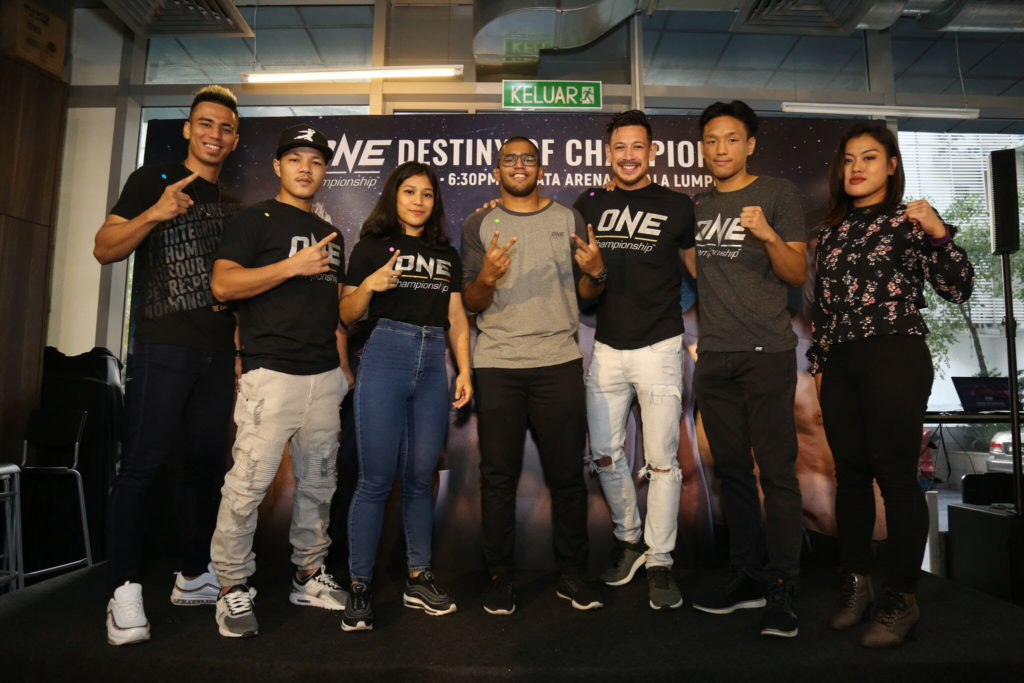 22 November 2018 – Kuala Lumpur, Malaysia: The largest global sports media property in Asian history, ONE Championship™ (ONE), recently held the official ONE: DESTINY OF CHAMPIONS Media Party last Thursday, 22 November at Ours Eatery at Damansara City Mall. The event was held in anticipation of the blockbuster event, ONE: DESTINY OF CHAMPIONS, which takes place at the Axiata Arena on Friday, 7 December. Photos of the event can be downloaded here.

Ticket information for ONE: DESTINY OF CHAMPIONS is available at www.onefc.com.

Former ONE Welterweight World Title challenger Agilan Thani is one of the most remarkable athletes Malaysia has ever produced. Ever since making his debut, the man they call “Alligator” has torn through the competition. Unbeaten as an amateur, Thani captured a Malaysian national championship before turning professional, winning six bouts in a row on the global stage of ONE Championship to earn a shot at the title. The top contender trains daily at Monarchy MMA in Kuala Lumpur but also regularly travels to the United States to sharpen his skills at the world-famous Team Quest. His next opponent is Kiamrian Abbasov.

Gianni Subba has forged a reputation as one of the most exciting talents to watch in the ONE cage. He spent his childhood growing up in both Hawaii and his mother’s hometown of Kuala Lumpur in Malaysia, but he left at the age of 16 to finish his education in Salt Lake City, Utah. While in the United States, he learned to wrestle. In 2010, he decided to move back to Malaysia in order to pursue his dreams as a professional mixed martial artist. Since then, he has defeated several former world title challengers to cement his place at the top of a stacked flyweight division. He takes on Ma Hao Bin in his next assignment.

Former Wushu World Champion and MIMMA Women’s Champion Jihin “Shadowcat” Radzuan is one of the finest female martial artists to emerge from Malaysia. Her first exposure to martial arts was a brief stint training in silat when she was six years old. She soon discovered Ultimate MMA Academy, and after just three months of training, she competed in Muay Thai for the first time. Driven by a hunger to compete, she followed that up with bouts in wushu, BJJ, kickboxing, and boxing, capturing a wushu world championship along the way. She joined ONE Championship in March 2018, and has since put together two impressive victories. Radzuan resumes her ascent through the ranks by facing Jenny Huang.

Mohammed “Jordan Boy” Mahmoud is a professional martial artist from Malaysia set to make his ONE Super Series debut. The 22-year-old went undefeated as an amateur, before turning professional, amassing a 50-7 record. Along the way, Mahmoud has won multiple titles, including the PLG Tournament Championship and MuayFight Championship, among others. He now finds his way to the bright lights of ONE Championship and looks to make a name for himself amongst the world’s best strikers. In his first outing for the promotion, Mahmoud takes on Stergos Mikkios.

“I think my opponent (Kiamrian Abbasov) is pretty tough. He went three rounds with Luis Santos. He has pretty awkward footwork and I think he’s a tough dude. I’m looking forward to fighting him. I’ve been preparing as usual, like how I always do. So expect a lot of the same action and explosiveness from me. I always come to fight and I never back down from any challenge. I’m looking forward to the match.”

“I think Ma Hao Bin is a young and strong opponent. He has great cardio and is very aggressive. My preparation for the fight has been good. I have split my time between Kuala Lumpur and Bali, working on everything. My opponent is very tough, so I’ve worked on all areas of my game, wrestling, and BJJ. I worked a lot on my cardio as well. I want to push the pace in this fight and look for a finish.”

“Facing a former World Title challenger, I think it’s a good test for me. She (Jenny Huang) has good grappling skills, so it will be interesting to see how we match up together on the ground. I am proud to represent Malaysia on the biggest global stage of competition. Doing what I love to do, I am very lucky. I am working very hard at improving my skills so I can make my fans and my country proud.”

“I’ve seen a couple of his (Stergos Mikkios) fights and he is a great athlete. His boxing and low kicks are very good but I’m confident I can handle what he has in store for me. I’m a more technical athlete, and whenever I start a fight I always attack very patiently. For my first battle, I want to bring the knockout home. This is the biggest ever match in my career and better still in my hometown, Kuala Lumpur. I want the best knockout of the night and make my country proud.”

ONE: DESTINY OF CHAMPIONS is set for the Axiata Arena in Kuala Lumpur, Malaysia on Friday, 7 December. The card features a series of top Malaysian athletes, as well as the absolute best in international martial arts talent. In the main event, Yodsanklai IWE Fairtex of Thailand takes on Luis Regis of Australia in a ONE Super Series Muay Thai contest.