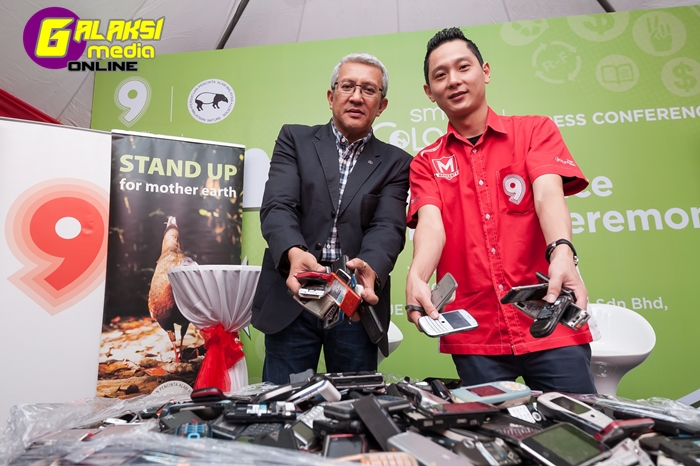 In response to the high number of wastage andpollution due to the high number of disposable mobile phones in the country, Ninetology ASEAN and Malaysian Nature Society (MNS) has formed an exclusive mobile recycling program, the Smart Ecology 2, to reduce this damaging effects on the environment. MNS acknowledges Ninetology as catalyst in taking leadership with the phone recycling program in the country. As well as taking a stand to make a difference in the environment.
Before this, users looking to upgrade their phones do not have a platform to “contribute” back to saving the environment. However, with this new initiative, users looking to upgrade their current mobile phones will now have a channel to patron when they get their new phones by trading in their old phones. These old phones will be gathered by MNS and its Recycle for Nature team, in which will then be disposed or recycled via the Green Recycling method. The respective parts of each device will be segregated respectively to be repaired then re-used for future new devices.

“It is never smart to have accumulating unused devices in almost every corner of our very own homes as it gives more harm than any good in the long run, especially when new smart phones are launched every other day. Hence, our initiative of Smart Ecology 2 with MNS to provides the platform for people who are looking into upgrading their phones, a chance to contribute back to the environment,” Sean Ng, CEO of Ninetology ASEAN.

In a way to encourage and motivate users to recycle their old phones, the Smart Ecology 2 program offers rebates of up to RM200 to users who trade-in their old mobile phones. All they need to do is to sign-up at ninetology.com/echannel before
the new purchase. At the same time, in order to educate the younger generation and instil environmental values, RM150 rebates are given to students and youth (up to age 30) on their new Ninetology smartphone purchase – without any trade-in request.

There are a total of 7 models that are selected to be part of this initiative. Currently, three models are included in the program – the U9R1, Stealth II, and Insight, with the U9R1 being the beacon model for the Smart Ecology 2 program. This model is the latest environmental friendly quad core smartphone with bat tery saving feature, and is built with only 7.8mm of thinness.

Joining the fray eventually will be another 4 models – which will be unveiled at 9pm,
2nd December 2013.