(SUKAN) COMPLETE CARD ANNOUNCED FOR ONE: REIGN OF VALOR ON 8 MARCH IN YANGON 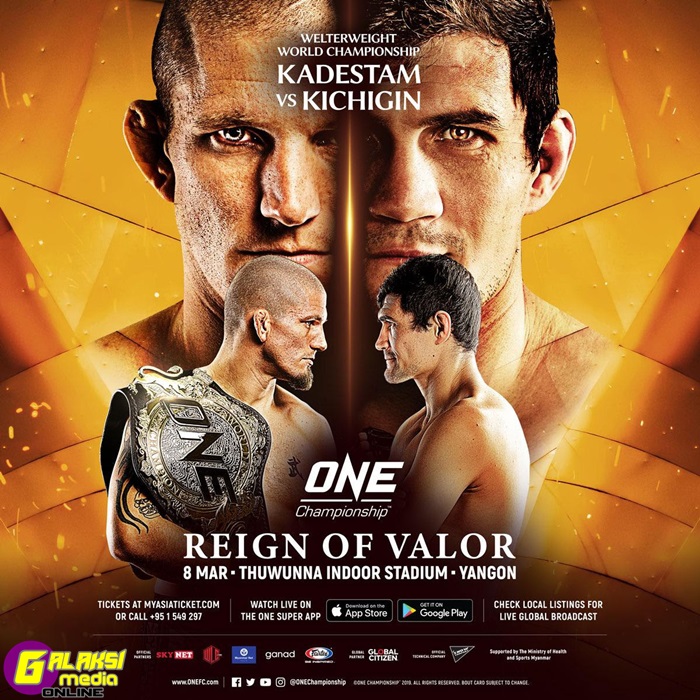 27 February 2019 – Yangon, Myanmar: The largest global sports media property in Asian history, ONE Championship™ (ONE), has just announced the complete card for ONE: REIGN OF VALOR, set for the Thuwunna Indoor Stadium on Friday, 8 March. In the main event, reigning ONE Welterweight World Champion Zebaztian “The Bandit” Kadestam of Sweden will make the first defense of his ONE World Title against Georgiy “Knight” Kichigin of Kazakhstan. 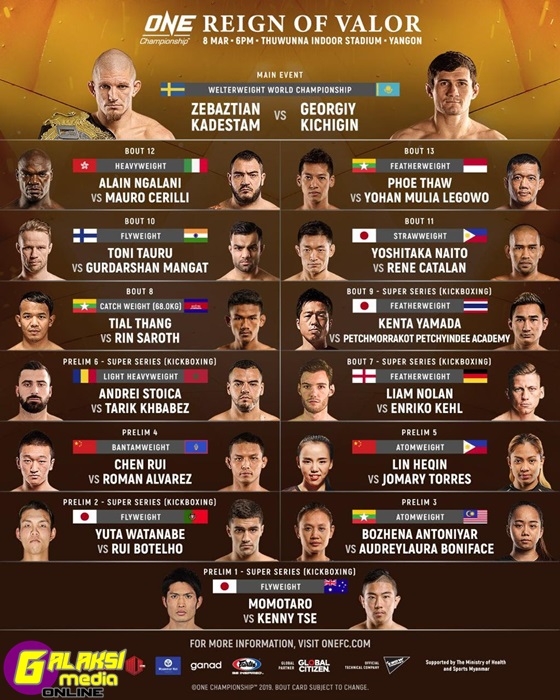 Kichigin is a grappling specialist and a Fight Nights Global Welterweight Champion who hails from Almaty, Kazakhstan. He has amassed a stellar 20-5 professional mixed martial arts record, of which 16 victories have come by submission. “Knight” is currently riding an impressive 14-bout win streak, having not lost a match since November 2014. Now, he makes his way to ONE Championship to challenge Kadestam for the ONE Welterweight World Title.

Phoe Thaw, a Lethwei practitioner, burst onto the scene in 2015 in impressive fashion. He won his first six mixed martial arts contests, five of which by knockout in the first round. Last October, he suffered the first setback of his career and now, he is looking to get back on track with a win over a veteran martial artist.

Ngalani, a Cameroon-born martial artist who trains out of Impakt MMA in his home of Hong Kong, boasts of a terrifying combination of power and speed, and is always looking to end matches early. Ngalani is a four-time Muay Thai and kickboxing heavyweight World Champion. After a short stint in ONE Super Series, Ngalani makes his return to mixed martial arts to take on Mauro Cerilli.

Cerilli is a Cage Warriors Heavyweight Champion and a certified finisher known for his knockout power and submission skills. Prior to his ONE debut, Cerilli was on an impressive five-bout win streak, with four of those wins ending with emphatic knockouts. Cerilli looks to capture his first win under the ONE banner when he meets Ngalani.

Naito is one of the most successful martial artists to ever emerge from Japan, with a remarkable run as the Shooto Flyweight Champion. Since making his ONE Championship debut in 2016, Naito has captured the ONE Strawweight World Championship on two occasions, defeating former titleholders Dejdamrong Sor Amnuaysirichoke and Alex Silva. Now, the former two-time World Champion looks to climb back up the ladder as he faces Catalan.

Catalan is one of the most decorated wushu practitioners ever to make the transition to mixed martial arts, with podium finishes in the Wushu World Championships, the Wushu World Cup, the Asian Games, and SEA Games. The veteran is currently riding an impressive five-bout win streak, two of which have ended in exciting finishes. The Filipino looks to notch the biggest win of his career when he faces former ONE World Champion Naito.

Former ONE World Title challenger Toni “Dynamite” Tauru is making his return to the ONE cage, following a short break from competition. The Finnish athlete, who is the former Cage Warriors Bantamweight Champion, has been competing in ONE Championship since July 2015. Eight of Tauru’s 11 career victories have come by submission, proving his craftiness on the mat.

Tauru is set to face Gurdarshan “Saint Lion” Mangat of Williams Lake, British Columbia, Canada who is making his promotional debut after having competed in regional promotions. Mangat is a well-rounded striker and grappler, and is a 10th Planet Jiu-Jitsu product. He is widely-considered the top pound-for-pound mixed martial artist from India. A winner of his last three bouts, Mangat steps into the ONE cage and looks to extend his win streak against Tauru on the global stage of martial arts.

Making his professional mixed martial arts debut is four-time Chin State Wrestling Champion Tial Thang, who squares off with Cambodian Kun Khmer practitioner Rin Saroth, a former KWC 3 Featherweight Tournament Finalist with a 110-22 record in Kun Khmer. Saroth made his ONE Championship debut in 2015 and has since posted victories over Mission Ali and Mario Satya Wirawan. Tial Thang and Saroth will face each other in a 68-kilogram catch weight bout.

Also sharing the cage in a ONE Super Series Kickboxing bout will be English Muay Thai star Liam Nolanand German former K-1 World Max Tournament Champion Enriko “The Hurricane” Kehl. Nolan is a Roar Combat League World Champion, while Kehl is a K-1 World Champion. The two veteran strikers look to light up the highlight reel at ONE: REIGN OF VALOR with their fan-friendly styles.

Heqin is a 25-year-old Chinese martial arts star who is currently on a five-bout win streak. She possesses incredible power in her strikes and has registered multiple knockouts in her mixed martial arts career. “Fighting Sister” aims to make a statement in her ONE Championship debut by taking out the highly-regarded Torres.

Rui is the ONE Jakarta Tournament Champion, and is undefeated in his professional mixed martial arts career. Alvarez, who hails from Saipan in Northern Mariana Islands, is a promising athlete with solid striking and grappling skills. The two aim to make a lasting impression in a battle of tough young prospects.

Kicking things off on the preliminary card will be a pair of ONE Super Series Flyweight Kickboxing contests, with Japan’s Yuta Watanabe taking on Portugal’s Rui Botelho and Japanese star Kohei “Momotaro” Kodera facing Chinese kickboxer Kenny “The Pitbull” Tse.