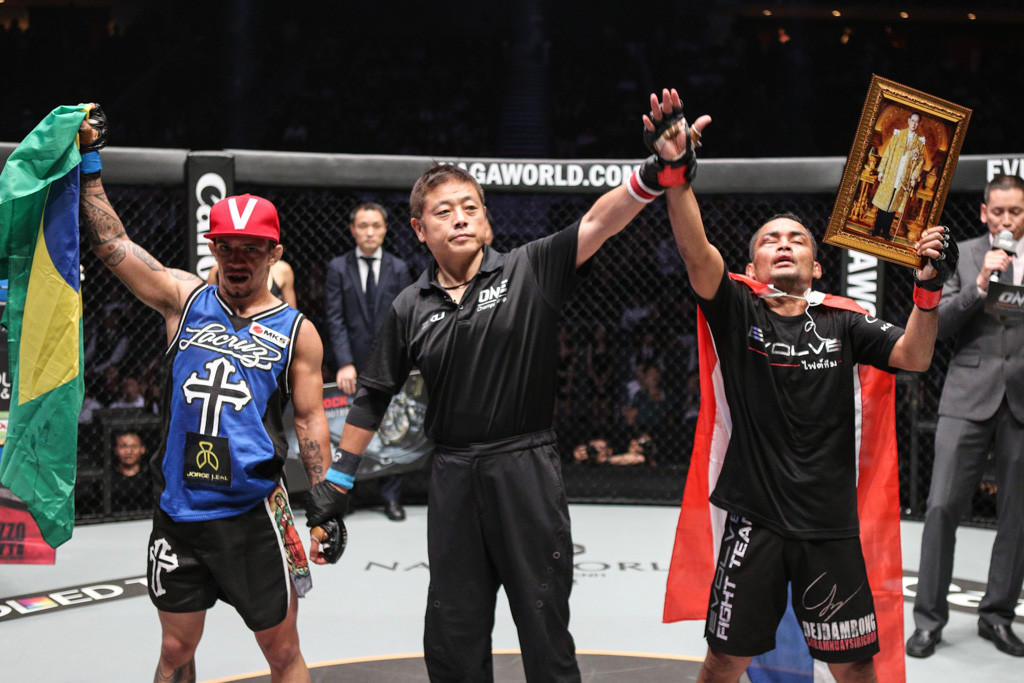 13 November 2015 – Singapore: The largest sports media property in Asian history, ONE Championship™ (ONE), made a successful return to Singapore, Friday, November 13, with another evening of world-class mixed martial arts action. ONE: PRIDE OF LIONS rocked the Singapore Indoor Stadium with spectacular finishes, featuring the absolute best in local and international talent. ONE Strawweight World Champion Dejdamrong Sor Amnuaysirichoke retained his title with a unanimous decision victory over the challenger, Yago Bryan of Brazil.

In the main event of the evening, ONE Strawweight World Champion Dejdamrong Sor Amnuaysirichoke defeated Yago Bryan of Brazil by unanimous decision to retain his title. Both fighters traded shots in furious exchanges, with Dejdamrong choosing to tag Bryan continuously with high and low kicks, while Bryan opted to counter with left hooks. A minor cut opened up above Dejdamrong’s right eye in round one, but was quickly patched up by his corner. Much of the same action continued throughout the bout, but it was the champion who was the busier fighter down the stretch, earning the judges’ nod.

In what was a battle of tremendous strikers, Kotetsu Boku’s impressive boxing display earned him a victory over highly-regarded Major Overall of the United States. The action was tense in the first round as both fighters swung for the fences with wild, looping shots. Boku used his trademark boxing to keep Overall honest while the American impressed with flashy kicks and flying knees. Boku came alive in the second round as he caught his opponent with a straight right hand, dropping Overall. Though Overall was able to get back on his feet, Boku continued the onslaught, landing punch after punch to coerce referee Yuji Shimada to step in and stop the fight.

Singapore’s MMA darling, “Unstoppable” Angela Lee notched another impressive submission victory, this time over “The Kilapino” Natalie Gonzales Hills of the Philippines in round one. Hills started the bout aggressively with her Muay Thai, smothering Lee with punches and kicks. Lee weathered the storm but wound up with her back on the canvas. Lee turned things around with a reversal on Hills, landing in full mount. From there, Lee worked to take Hills’ back and secured a Twister to force Hills to tap out.

Alain Ngalani of Cameroon made quick work of Igor Subora of the Ukraine, in an intense heavyweight showdown. Ngalani wasted no time and went right after Subora at the sound of the bell, pushing Subora back with powerful punches. A kick to the body hurt Subora and sent him reeling against the cage. Ngalani finished off Subora after he unloaded a series of downward strikes from top position, as the referee stepped in to intervene.

Amir Khan of Evolve-MMA utilized his size and strength to overpower Jimmy Yabo of the Philippines to score a first round TKO. The larger Khan dominated the striking exchanges and found his way into full mount after a scramble on the ground. With Khan in complete control, the 21-year old went to ground-and-pound and Yabo had no choice but to tap out from the relentless attack.

Martin Nguyen controlled the action on the feet and from top position on the mat to dominate Edward Kelly of the Philippines en route to a first round stoppage. Nguyen shot for a takedown on Kelly minutes after the bell and looked for a submission. In Kelly’s guard, Nguyen’s sharp elbows opened up a gash on the Filipino’s forehead causing the cageside physician to call a halt to the contest.

Benedict Ang of Evolve-MMA continued his promising young career with a victory over Yohan Mulia Legowo of Indonesia. In the first round, Ang peppered Legowo with various striking combinations, stuffed a takedown and got a few good punches in from the top. In round two, Ang continued with his well-placed striking as Legowo invited his younger opponent to engage. With Legowo no longer able to intelligently defend himself, the bout was called to a halt with his corner failing to answer the call for round three.

Li Kai Wen and Nathan Ng kicked off ONE: PRIDE OF LIONS in a featherweight bout. Both martial artists started the fight in a calculated manner with Li unloading powerful combinations and Ng opting to shuffle stances to keep his opponent at the end of his jab. In the end, Li caught Ng with a devastating left hook right on the jaw to score a spectacular knockout in the first round.

Official results for ONE: PRIDE OF LIONS

Featherweight bout: Amir Khan defeats Jimmy Yabo by TKO (Tap Out Due To Strikes) at 4:18 minutes of round 1