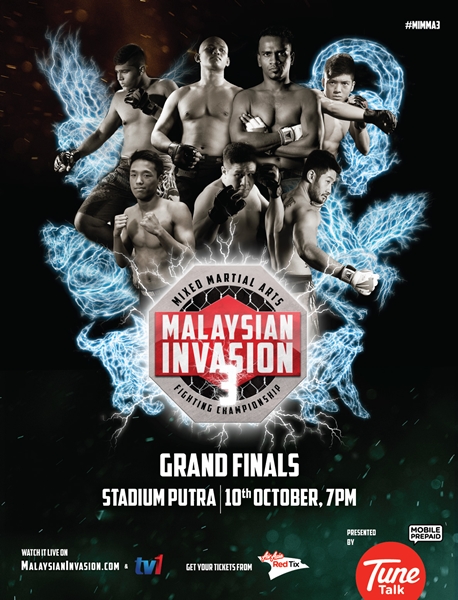 The most electrifying sports event in Malaysia returns for the 3rd installment this 10th October 2015 at Stadium Putra Bukit Jalil, featuring 13-bouts of home grown talents battling it out for the gold, the Tune Talk’s Malaysian Invasion MMA Championship title belt. A property of Tune Talk, Malaysian Invasion Season 3 Grand Finals is the conclusion of a year-long national Mixed Martial Arts (MMA) tournament with the Women’s Pride and Foreign Pride as the newly added division to the existing seven (7) weight classes.

Malaysian Invasion MMA (MIMMA) was founded by Tune Talk CEO Jason Lo and Malaysia’s Sports and Youth Minister YB Khairy Jamaluddin back in 2013 following their success in MyTeam football reality TV show. Jason was a fan of MMA but realized there wasn’t a talent development platform in order to have a proper athlete growth platform, thus, MIMMA Season 1 was launched in 2013. In season 2, everyone was blown away by the broken records and the benchmark set, skyrocketing the quality of the fighters and the fight events to an unprecedented level. Now as MIMMA heads to the Grand Finals for its 3rd season, history will be written all over again, with a breed of quintessential amateur MMA Champions, with some already proceeded to compete professionally bringing pride back to Malaysia. 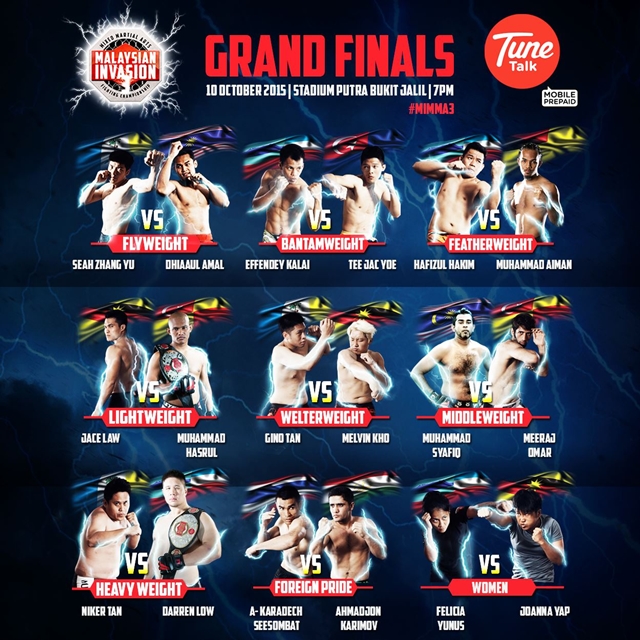 Out of the seven defending champions from Season 2, three will be defending their titles. Darren Low, Seah Zhang Yu and policeman Muhammad Hasrul has set high standards to follow when they were crowned the title of MIMMA Champion back in October 2014, which secured then as the best all-Malaysian fighters in their respective weight divisions. The other defending champions have since vacated their spot in MIMMA for a Professional MMA career, thus fulfilling the main goal of MIMMA’s talent development platform.

Two new divisions added in MIMMA Season 3 are the Women’s Division as well as the Foreign Pride division. For the first time in the history of MIMMA, there is a division dedicated to Women’s MMA (WMMA) for the budding female warriors of Malaysia. MIMMA has also realized the abundance of talents in the foreign talents based around Malaysian thus Foreign Pride was created to allow the hungry talents to be a part of this record-breaking combat sports event.

Malaysian Invasion MMA Season 3 Grand Finals will be held during the National Sports Week at Stadium Putra Indoor Stadium Bukit Jalil on the 10th October 2015. There is also a ONE X MIMMA Multipass available for fans who wants to catch both MIMMA and ONE FC for an action filled weekend of MMA. MIMMA3 Grand Finals tickets are available at AirAsia Redtix starting from RM40 while the Multipass starts at RM77.20.

For the first time in history the MIMMA 3 Grand Finals will be shown live on a free network; RTM 1 (Astro Ch101). It will also be streamed live at www.malaysianinvasion.com.