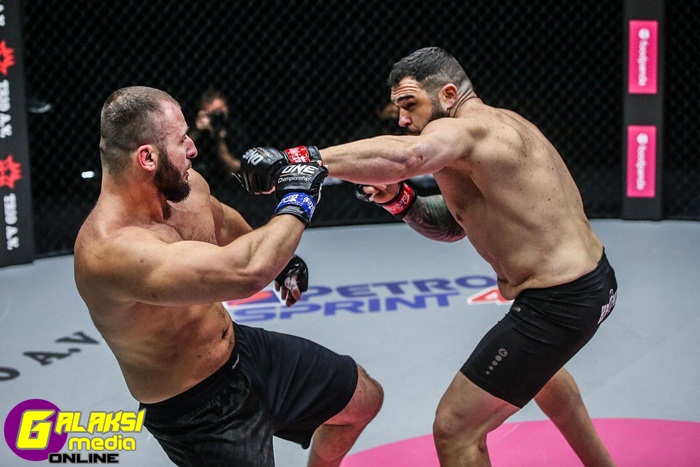 The largest global sports media property in Asian history, ONE Championship™ (ONE), returned Friday with ONE: UNBREAKABLE II. The explosive card featured six compelling bouts contested under mixed martial arts and kickboxing rules, all of which ended by knockout, technical knockout, or submission.

In the main event, former ONE Heavyweight World Title challenger Mauro “The Hammer” Cerilli executed a fantastic game plan to spoil the much-anticipated promotional debut of Abdulbasir “Dagestan Machine” Vagabov. Cerilli used the entire length of the Circle, avoiding Vagabov’s powerful right hand while looking to counter with his own haymakers. In the second round, Cerilli hurt Vagabov with a low kick, sending the Russian reeling toward the Circle Wall. Cerilli then sealed the win with a steady stream of ground strikes that forced the referee to halt the contest.

In the co-main event, flyweight standout Daichi Takenaka submitted Ivanildo “Monstrinho” Delfino in a high-level ground exchange between grappling specialists. Both men attempted to gain advantageous positions in a first-round stalemate. In the second frame, Takenaka took Delfino’s back and threatened with a rear-naked choke for a good two minutes as the Brazilian just barely made it to the bell. In the final stanza, Takenaka took the back again early, this time successfully snaking his forearm underneath Delfino’s chin to complete the choke and force the tap.

“Pretty Boy” Kwon Won Il overcame a game effort from “The Ghost” Chen Rui, winning by knockout in the third round. The two power punchers traded thunderous strikes at the center of the Circle for most of the contest, with neither man willing to back down. A thrilling second round left both men on the brink of exhaustion. Chen, in particular, took Kwon’s best shots but was still standing after 10 minutes of action. In the opening moments of the final frame, Kwon cornered Chen with another combination, this time delivering a crushing blow to the ribs that ended matters abruptly.

WMC Muay Thai World Champion Beybulat Isaev made quick work of Serbian Kickboxing Champion Mihajlo Kecojevic, knocking the taller fighter out with a single punch in the first round and setting a new record for the fastest ONE Super Series KO at light heavyweight. Kecojevic used his size and reach advantage early on, pressuring Isaev against the Circle Wall. Answering back, Isaev stood his ground and unleashed a sharp counter right hand that sent Kecojevic crashing face-first into the canvas. The referee immediately called off the contest.

Cambodian-American female star Sovannahry “The Sweet Savage” Em returned to the Circle in exciting fashion, finishing Choi Jeong Yun inside of two rounds. Choi showcased her superior striking early, utilizing her length to keep Em from getting on the inside. But once Em was able to enter the clinch position, she showed tremendous control and neutralized Choi’s stand-up arsenal. In the second round, “The Sweet Savage” took Choi to the mat, worked her way into a mounted crucifix, and applied ground-and-pound to seal the technical knockout victory.

In his ONE debut, Senegalese sensation “Reug Reug” Oumar Kane authored an emphatic knockout of four-time Kickboxing and Muay Thai World Champion Alain “The Panther” Ngalani. Ngalani employed a steady body attack with his kicks in the opening moments of this heavyweight bout. But once “Reug Reug” was able to close the distance, he successfully took “The Panther” to the ground with a takedown. From there, Kane pounded his foe with a series of unanswered right hands to force the stoppage.

Next, ONE Championship returns with ONE: UNBREAKABLE III, a previously recorded event scheduled for broadcast on Friday, 5 February. In the main event, former ONE Atomweight Kickboxing and Muay Thai World Champion Stamp Fairtex continues her historic quest for a third ONE World Title. It’s the toughest test of the Thai phenom’s stellar career, as she puts her undefeated mixed martial arts record on the line against Ukrainian grappling specialist Alyona Rassohyna in a classic striker-versus-grappler matchup. For more information, please visit the official ONE: UNBREAKABLE III Event Page.