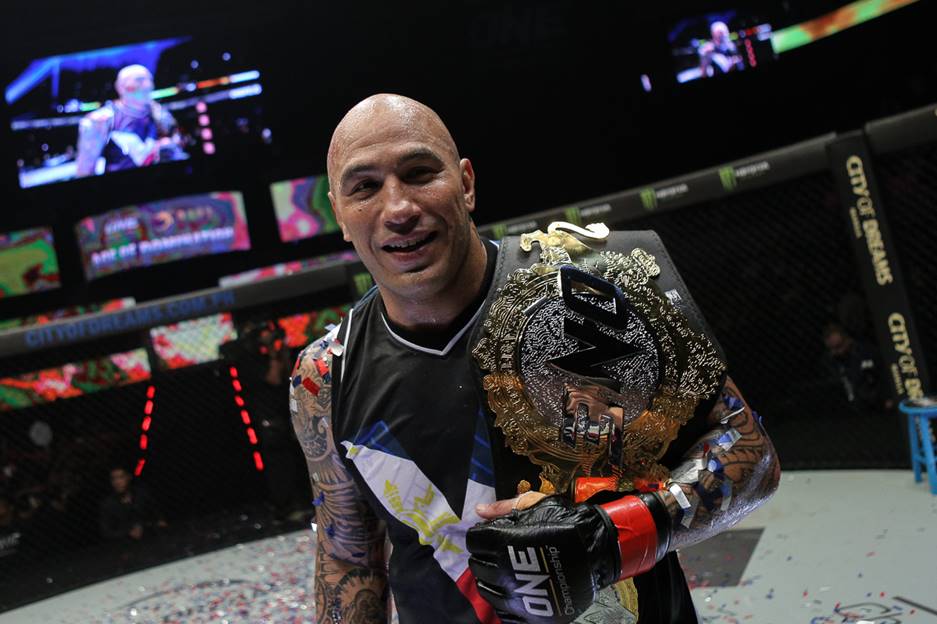 02 December 2016 – Manila, PHILIPPINES: The largest sports media property in Asian history, ONE Championship™ (ONE), once again electrified the capacity crowd at the Mall of Asia Arena in Manila. ONE: AGE OF DOMINATION showcased the Philippines’ top mixed martial arts (MMA) talent along with the world’s best fighters. In the main event, Brandon Vera retained his ONE Heavyweight World Championship with a dominant victory over Japanese challenger Hideki Sekine.

In the main event, ONE Heavyweight World Champion Brandon “The Truth” Vera made easy work of previously unbeaten Japanese challenger Hideki Sekine, winning by technical knockout just minutes into the first round. From the opening bell, Vera began to land a series of solid blows on Sekine, who took Vera’s best shots quite well. Moments later however, a thudding body kick connected for Vera, sending Sekine crashing to the canvas clutching his midsection. Vera then put on the finishing touches with punishing strikes from the top.

In the co-main event of the evening, ONE Bantamweight World Champion Bibiano “The Flash” Fernandes of Brazil retained his title, overcoming a nose injury he suffered in the third round to defeat young rising star Reece “Lightning” McLaren of Australia. Both Fernandes and McLaren were very evenly matched, with each having their moments over the course of the five-round title tiff. While McLaren proved to be a live challenger, Fernandes dug deep to show true championship mettle, doing just enough to earn the split decision victory in a grueling affair.

Evolve MMA bantamweight fighter Mark “Mugen” Striegl persevered through three grueling rounds against Bulgaria’s Sotir Kichukov to win by unanimous decision in a catchweight contest. Striegl began the bout aggressively, using superior speed and angles to stifle Kichukov who appeared unable to time Striegl’s erratic rhythm. Striegl also took Kichukov down to the ground at will, controlling his opponent with a smothering top game. In the end, all three judges saw the bout the same way with Striegl emerging as the victor.

Finnish bantamweight sensation Toni “Dynamite” Tauru finally earned his first victory inside the ONE Championship cage, easily dispatching Team Lakay striking specialist Geje “Gravity” Eustaquio of Baguio City, Philippines. Tauru wasted no time in the stand up with his Filipino foe, shooting immediately for a single leg, driving Eustaquio to the mat. From there, Tauru used his size and strength advantage to power through a rear naked choke to notch the win in the first round.

Former ONE Featherweight World Champion Honorio “The Rock” Banario of Team Lakay continued his re-emergence as a new and improved fighter by making quick work of Indian mixed martial artist Rajinder “Knockout” Singh Meena. Banario electrified the crowd with his performance, winning by armbar submission with less than a minute left to go in the first round. Banario, who says he feels much stronger at lightweight, dominated both striking and grappling exchanges. The finish came swiftly when Banario transitioned effortlessly into an armbar from side control to earn the victory.

Colossal middleweight contenders Leandro Ataides of Brazil and Mohamed “Flex” Ali of Egypt punished each other with a series of powerful strikes, bringing the crowd up to their feet as they traded blows at the center of the ONE Championship cage. Ataides, a multiple-time Brazilian jiu-jitsu world champion, decided to stand up with Ali, a former boxer. Towards the end of the second round, Ataides lunged forward with a flying knee that landed right on Ali’s jaw, separating the Egyptian from his senses on the canvas.

Edward “The Ferocious” Kelly of the famed Team Lakay MMA of Baguio City overcame a spirited performance from Indonesian fighter Sunoto “The Terminator”, to nab the victory in round three by referee stoppage. Kelly and Sunoto took turns plastering each other with heavy-handed punches and powerful snap kicks. It was Kelly however, who appeared in control of the exchanges. In the third, Kelly landed a thunderous body kick that sent Sunoto crumbling to the mat. Kelly then immediately took full mount and finished Sunoto off with ground and pound.

Unbeaten Team Lakay flyweight prospect Danny Kingad of Baguio City impressed with a high-level striking and grappling performance, dominating veteran striking ace Eugene Toquero of Manila to win by submission in the first round. Kingad battered Toquero on the feet and maneuvered him effortlessly on the ground before putting together the finish. As Kingad latched on to Toquero’s right arm, the Team Lakay fighter executed a flawless transition into an armbar that left Toquero no choice but to submit.

Chinese-Taipei’s Jenny Huang overcame a near-dominant performance from Baguio City’s April Osenio to win via come-from-behind submission. Osenio repeatedly got the better of Huang in striking exchanges, showcasing her famed Team Lakay wushu skills, but Huang began to time her takedowns more efficiently in the second round. With her back on the mat, Huang snaked her right foot underneath Osenio’s neck and secured a gogoplata to force the tap.

Khun Khmer prodigy Sim Bunsrun of Cambodia delighted the crowd with a highly-technical display of striking, overwhelming opponent Liu Peng Shuai with looping right hands and body kicks. Liu tried his best to survive the onslaught, laying back mostly on the defensive but Bunsrun was simply too much for his Chinese foe. Behind a well-prepared strategy, Bunsrun took the bout on all three judges’ scorecards.

Chinese bantamweight prospect Xie Bin and Jakarta, Indonesia’s Mario Satya Wirawan kicked off ONE: AGE OF DOMINATION with a showcase of grit and determination in a three-round bantamweight contest. Xie peppered Wirawan with a multitude of overhand rights and stinging jabs for much of the fight. In the second round, Xie scored points for a near finish with a deep guillotine choke. The third round saw much of the same action as both fighters rose to their feet at the sound of the final bell. In the end, Xie Bin earned a unanimous decision victory.

Official results for ONE: AGE OF DOMINATION

Middleweight bout: Leandro Ataides defeats Mohamed Ali by Knockout at 4:54 minutes of round 2

Featherweight bout: Edward Kelly defeats Sunoto by TKO (Strikes) at 2:14 minutes of round 3