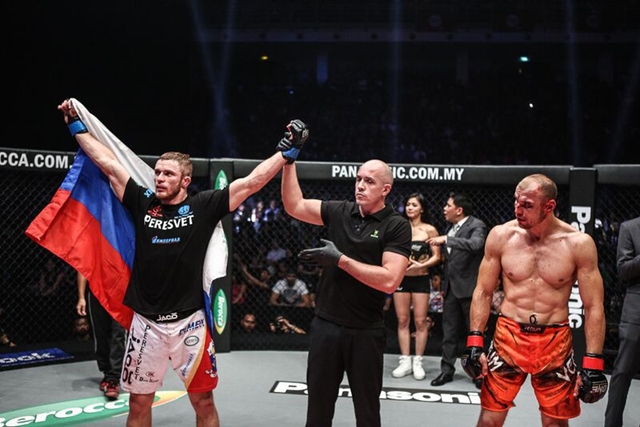 9 October 2015 – Kuala Lumpur, Malaysia: The largest sports media property in Asian history, ONE Championship™ (ONE), in partnership with Tune Talk, delivered yet another evening of world-class mixed martial arts action. The world’s most exciting MMA organization rocked Stadium Putra with 11 electrifying bouts at ONE: TIGERS OF ASIA. In the main event, Vitaly Bigdash shocked former champion Igor Svirid to nab the middleweight title.

In an intense main event showdown of elite middleweights, Russia’s Vitaly Bigdash weathered an early storm from former champion Igor Svirid of Kazakhstan to win via referee stoppage. Svirid stormed the gates at the opening bell, rocking Bigdash with huge bombs which staggered the Russian on numerous occasions. Bigdash however survived the onslaught and finished off Svirid a few minutes into the second round with a knee and a punch combination, followed by hammer fists on the ground.

“I know he is a very good fighter, a strong fighter, but I just wanted to go with the flow,” said Bigdash. With the victory, Bigdash is crowned the new ONE Middleweight World Champion.

In the Malaysia Super Fights, Ev Ting took home a victory for Malaysia while both Ann Osman and Peter Davis fell short in their respective bouts.

Irina Mazepa surprised the partisan Malaysian crowd with an upset win over Malaysia’s fighting belle, Ann “Athena” Osman. Osman looked to employ her usual grinding style to contain Mazepa, a former kickboxing champion. However, Mazepa prepared well for Osman’s ground game and quickly worked her way back up to the feet. In the stand-up, Mazepa flashed her solid striking skills, dropping Osman with a left hook followed by hammer fists from the top.

Ev Ting had little trouble taking care of Team Lakay’s Honorio Banario, finishing the Filipino via Guillotine Choke just moments into the first round. Banario opted to shoot for takedowns instead of relying on his Wushu base which proved to be his downfall. Ting capitalized on a missed shot by Banario and sunk in a deep choke to force the tap.

Adrian Pang made quick work of Peter Davis in a sizzling lightweight contest. Pang patiently stood his ground against Davis who circled him just outside of range. Once Davis attempted to close the gap however, Pang’s power shots took over as he dropped Davis with a punch. Pang then finished his opponent off with follow-up strikes from the top. 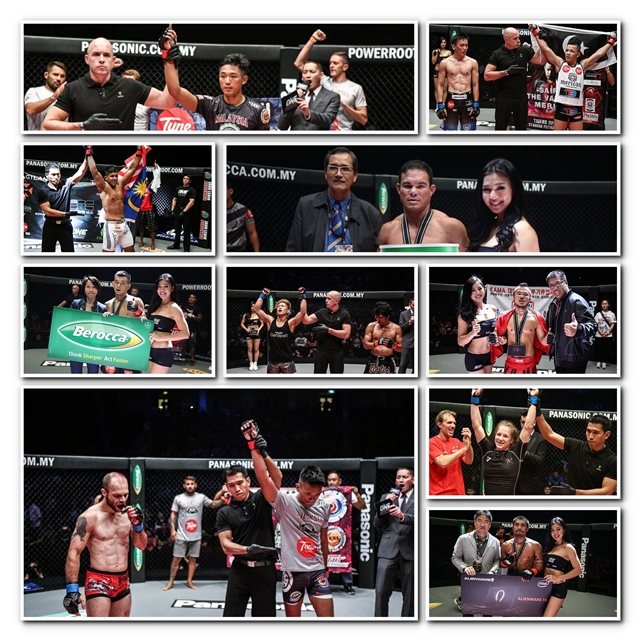 Featherweight standout Eric “The Natural” Kelly of the Philippines returned to the ONE Cage victoriously with a unanimous decision over Hiroshige Tanaka of Japan. Kelly, known for his technical submission game, showcased ferocious striking skills, battering Tanaka from end to end. Tanaka used his world-class wrestling to control Kelly, but the Filipino did more damage which earned the judges’ nod.

Riku Shibuya of Japan dominated Filipino Eugene Toquero from start to finish to win by unanimous decision. The two were expected to delight the crowd with a highly-anticipated striking battle, but Shibuya overwhelmed Toquero on the mat with his wrestling and devastating ground and pound. Toquero had difficulty shaking off Shibuya, who controlled the fight the entire way.

Korea’s Dae Hwan Kim made a successful return to the ONE Cage with a submission finish over China’s Teng Li Ge. In the first round, Teng kept Kim at bay with his long reach and solid stand-up game. Teng was also able to fend off a late submission attempt by Kim. In the second round, Kim found a way to get inside of Teng’s reach, locking in a one-armed Rear Naked Choke to force Teng to tap.

Former Malaysian Invasion Mixed Martial Arts (MIMMA) featherweight champion Keanu Subba overcame a determined Florian Garel to claim victory by referee stoppage due to strikes with only a few seconds left to go in the first round of Subba’s ONE Championship debut.

In the second bout of the night, two Malaysian stars battled inside the ONE Cage. In the second round it was Saiful Merican who emerged victorious with a technical knockout victory over countryman Melvin Yeoh.

Agilan “Alligator” Thani of Malaysia kicked off ONE: TIGERS OF ASIA in spectacular fashion with a first round submission victory over Hisham Hiba, forcing the Egyptian to tap just a few minutes into the bout. 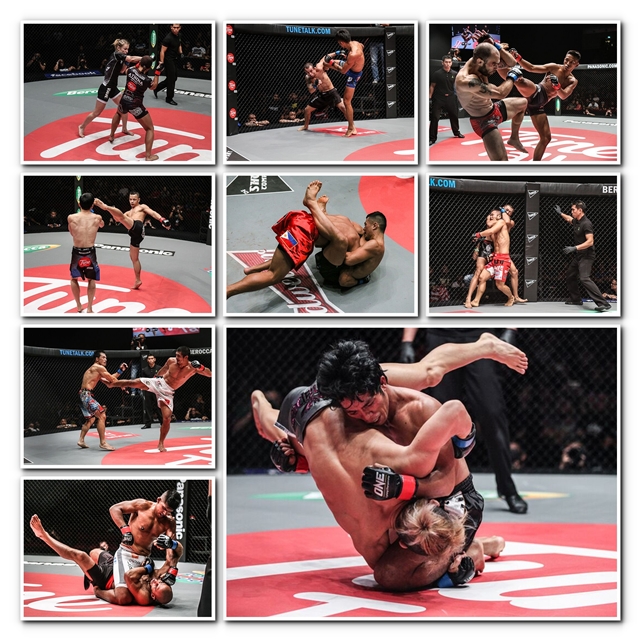 Official results for ONE: TIGERS OF ASIA