(HIBURAN) Interview Transcript: The Spies Who Loved Me (iQIYI Original) 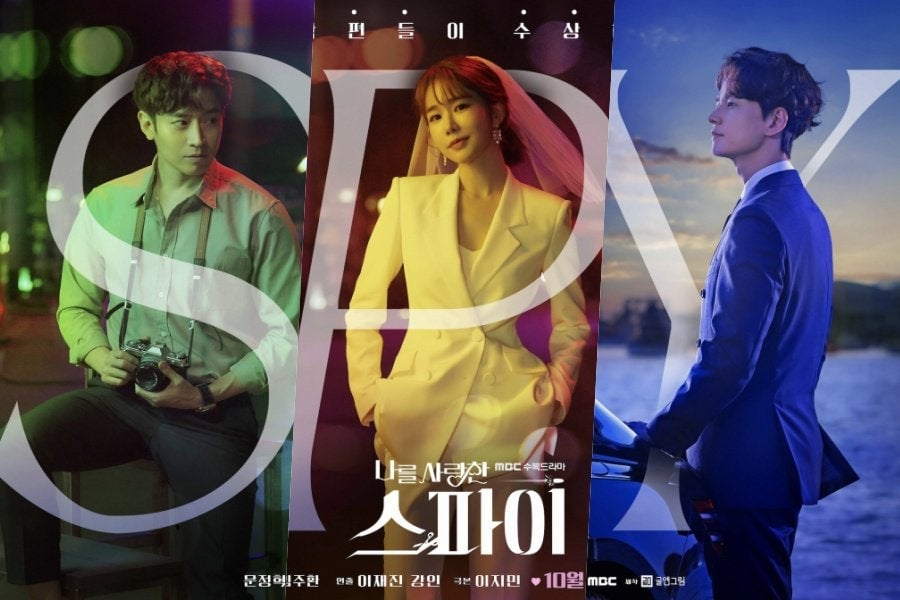 The Spies Who Loved Me, an iQIYI Original and exclusively on iQIYI globally (except South Korea), starring Yoo In Na, Eric Mun and Lim Ju-Hwan, is a suspenseful romantic comedy about a woman who inadvertently gets caught up in the world of espionage.

We’re happy to share the interview transcripts from the 3 main leads, Yoo In Na, Eric Mun and Lim Ju-hwan, where they share their experience in playing the characters, how they interpret them and their chemistry with one another. We hope that this will be of interest to you and your readers who are fans of Korean dramas

Eric | The Spies Who Loved Me

3. While performing a character, you have to put part of yourself into it, so that you can blend in with the character and create a new feeling that this character is unique to you. What memories, personalities or feelings do you think are placed into this character? What emotions or memories will you take away from this character?
No matter what happens to Jeon Ji-hun, he is still a divorced man, and still loves his ex-wife. Although I have no such experience, I think this is a very terrible story that I don’t want to expose. I think Jeon Ji-hun will bear such pain, so I interpret the character based on this point. In the play, Jeon Ji-hun feels uncomfortable because he always has to meet his ex-wife. Even so, there are funny scenes. I did a lot of work to make it persuasive but not exaggerated. The whole process was interesting.

4. Because Jeon Ji-hun is a person who believes that he can juggle both career and marriage at the same time, but he fails and gets a divorce in the end. What do you think is the key to do both? Can you really separate your work from life?
In fact, Jeon Ji-hun is an individualistic person. Like anyone else, he faces the brutal reality in his first marriage. In reality, I can separate work from personal life. Whether it is my work or my feelings, I will be responsible for what I have done. Those irresponsible words and deeds will disappoint other people. Although care and trust are important, I think the basis of these is love, which is the most important.

5. This is the first time you and Yoo In-Na work together. During the filming, did she surprise you in her performance? What aspects of your partner do you care about most when you’re acting alongside him/her? Or make to create the chemistry between both of you?
Yoo In-Na has a special sense of humor. Her calm and pleasant tone keeps her performance believable yet non-exaggerated. She is very focused in her part of emotional scenes, and stays very focused when her partner acts. I am very grateful to her for taking care of me. I think she is both a good actress and a good person. There are many factors that have an impact on cooperation, but the most essential thing is the love for the work, the love for and empathy with the character. If my partner can have the same feelings and empathy for the work and the characters like me, we can surely have a great time on set.

6. Since you play a spy/agent this time, did you have any special training or get injured? Do you enjoy being an action star? Have you ever felt unwell during filming?
Thanks to the well-prepared action team which always act swiftly, I did not get injured. In the filming of action scenes, although there is no inconvenience, as the weather was getting cold, if I swing into action scenes abruptly, I may get injured. So, we warmed up before filming.

7. On the big screen, the most classic spy is 007 James Bond, Mission Impossible series, Bourne series and so on. Do you have a favorite classic spy? Why do you like this character so much?
I like the Bourne series the most. Although the Bourne series isn’t as grandeur as other spy series, if it is produced in Korea, I think it would be most suited for Korean emotions and shot more realistically. When remarkable things are wrapped in ordinary paper, the virtues of those things will stand out more prominently.

Yoo In-Na | The Spies Who Loved Me

1. Could you tell us what aspects of the play and the character attract you?
The story revolves around my ex-husband, my current husband and I, whose elives should never have intersected with one other just like water and oil. It leaves a deep impression on me. The stories of each character are also fascinating. In addition, my character Kang Ah-reum is an outspoken and independent woman, which also makes me feel attracted to her.

3. What are the challenges of playing Kang Ah-reum. How did you prepare for the character?
Kang Ah-reum is an exceptional wedding dress designer, while having the potential to be a spy. Thus, not only did I consult with wedding dress designers, but also practiced sewing and tailoring at home whenever I was free. At the same time, I also practiced shooting and fighting. Although there are still many shortcomings, I was doing my best.

4. It is the first time for Moon Jung-hyuk, Lim Ju-hwan and you to cooperate with one other, and you play husband and wife. How did you break the ice and build up a rapport?
During the filming, both of them were really nice to me and took care of me, so that I could get it done smoothly. Jeon Ji-hun and I act in a way where we are like friends and lovers for many years, while Derek Hyun and I act in a way where we show more care and mutual respect. For Kang Ah-reum, Derek Hyun is her second husband after her failed marriage with Jeon Ji-hun. Thus, she may be more cautious.

5. Could you tell us your impression of Moon Jung-hyuk and Lim Ju-hwan? What do you think of their charms?
Both of them are actors whom I really want to act with. Moon Jung-hyuk always took good care of me while Lim Ju-hwan always treats me with humor. Thanks to them, during the filming, I could put all my energy into acting.

6. You are a wedding dress designer in the play. Are you good at tailoring or sewing in personally?
In fact, I’m not very good at it. But I learned a lot by preparing for this show.

8. Besides romantic dramas, do you have a genre/type of character that you really want to challenge yourself with?
I want to try a cool character who is good at fighting! I will try my best to play that type of character one day!

Lim Ju-Hwan | The Spies Who Loved Me

1. This is your first romantic comedy. How do you feel?
A new attempt is always so exciting. As an actor, I feel stressed too.

2. What aspects of this character attract you?
Although the character is charming, for me, the most attractive thing about the show is its light-hearted story. Because it’s a romantic comedy, it’s easy to appeal to a lot of audiences, which is fascinating.

3. What are the challenges of playing the character of Derek Hyun? How do you prepare for it?
Derek Hyun can speak all kinds of foreign languages fluently, which is a big challenge for me (laugh). Memorizing lines in foreign languages is just like memorizing lyrics. It seems that I have to work harder.

4. It is the first time for you to work with Yoo In-Na, and you play husband and wife. How did you break the ice and develop the tacit understanding?
I’ve learned a lot from Yoo In-Na when we work together. During filming, I often felt that Yoo In-Na deserves the title of Queen of romantic comedy.

5. Please share your impression of Yoo In-Na.
Yoo In-Na is very lovely. I feel happy working with her on the set.

7. What kind of characters do you want to challenge next?
I want to play a character in a crime or history drama.

9. How do you want the audience to describe you when they mention Lim Ju-hwan?
I hope that they would say this is someone who deserves to be called as an actor.