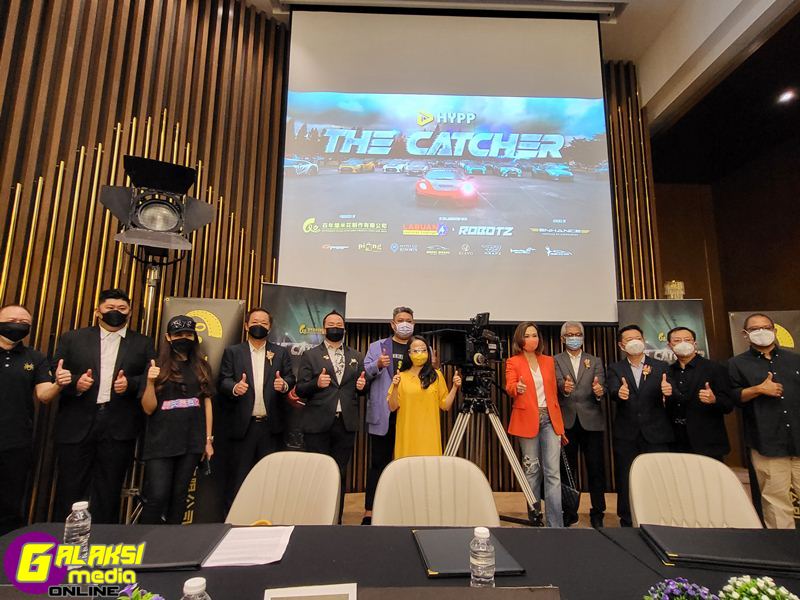 KUALA LUMPUR, 3 October 2021 – Announced at the press conference today was the launch of possibly the highest-invested movie ever in Malaysian history, “The Catcher’, in collaboration with Labuan Overseas Holding Berhad, and Robotz, and produced by Hundred Years Popcorn Production Sdn Bhd. The movie is set to break several records both domestically and internationally with the intention of boosting the tourism industry in Malaysia, after a heavy hit during this pandemic, and subsequently to support in reviving its economy. 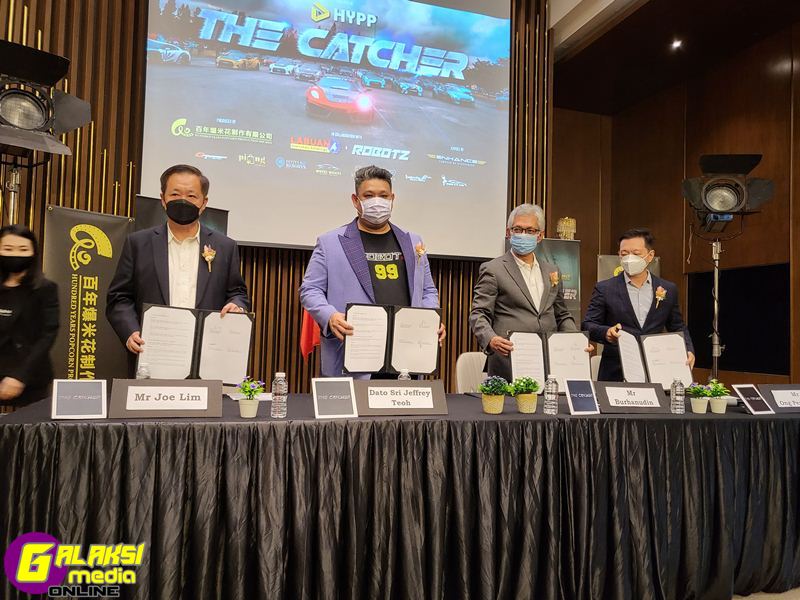 “We shall utilize the distinctive attributes of a certain brand and its historical business value to develop Intellectual Properties (IPs) with high-value accreditation, based on racing car performance brands that can be spined-off into brand-licensed hotels, auto city, petrol stations, theme parks, etc. Part of the film will be shot at a famous Port Dickson bay in Malaysia. This will not only stimulate the filming industry market but also promote its derivative activities such as the development of a Port Dickson Bay Studio that can boost hospitality & tourism, retail, and F&B, real estate and automotive enhancement industry, etc,” said Mr Ong Peng Chu, founder of Hundred Years Popcorn Production Sdn Bhd.

With a budget of more than RM50 million, The Catcher portrays the lifestyle and culture of car modification aficionados in Malaysia. The movie follows the story of a talented young village boy who works hard to defeat opponents from all around the world with heavily modified performance supercars. The film could also break the world record for featuring an astounding 500 supercars throughout the movie.

Dato’ Sri Jeffrey Teoh, Founder of Robotz, said, “Supercars are loved by everyone, from any stature or background. As supercar junkies, each of us at Robotz has always been inspired by Vin Diesel’s and Paul Walker’s successful “Fast & Furious” movie franchise, we hope to emulate the brilliance these movies hold. Our involvement in making history through this record-breaking film brings great joy and pride to every single one of us.”

All the cars in the movie belong to members of the Robotz Car Club, who shall also contribute monetarily in raising funds for the movie. At the press conference held on 3 October 2021, Labuan Overseas Holding Berhad signed off a generous RM 2 million to add to the movie’s initial kick-off expenditure.

Mr. Burhanudin bin Mohd Yusoff, CEO of Labuan Overseas Holding Berhad, said, “We, have managed and raised investments for a couple of local and international projects, but this one is exceptionally interesting. We support this project, not just because it is going to break records but, because of its attractive value-added proposition for our potential investors. It is only natural for ground-breaking movies such as this to catch the eye of many, especially our private high net worth investors. We are ecstatic about this launch, and we look forward to developing this business as there is massive potential to open up to investment opportunities in other motor vehicle-related industries, directly or indirectly, towards the recovery of our Malaysian economy.”

In this production where motor vehicles and racing is involved, for the Advisory in positioning the engineering and technical aspects, we had to seek the expertise and share the experience of Mr. Joe Hun Beng Lim. He is better known as Joe Lim, who is credited with introducing motorsports to China, now the world’s biggest car market and it is fitting that the Chinese motor racing fraternity recognizes him as the “Father of Motorsports” of the first motor racing circuit in China in the early 1990’s.

Informal street racing became popular in affluent special economic zones in the southem parts of China such as Guangdong. His influential Chinese business associates were keen to hamess the local demand and promote motorsports to international levels, especially at the top levels of the Formula 1 Grand Prix.

An amiable familiarity with motorsports personalities in Hong Kong, Macao, London, and Paris where the world motorsports authority – the FIA – is headquartered was also crucial to introduce world-class motorsports to China when most people didn’t have driving licenses in the 1990s. Joe Lim had all the special attributes and he leveraged them to good effect.

As the Deputy Chairman and General Manager of the Zhuhai International Circuit Ltd, Joe Lim managed to get the track constructed, inspected, and ready on time for the first FIA-sanctioned race in 1994. 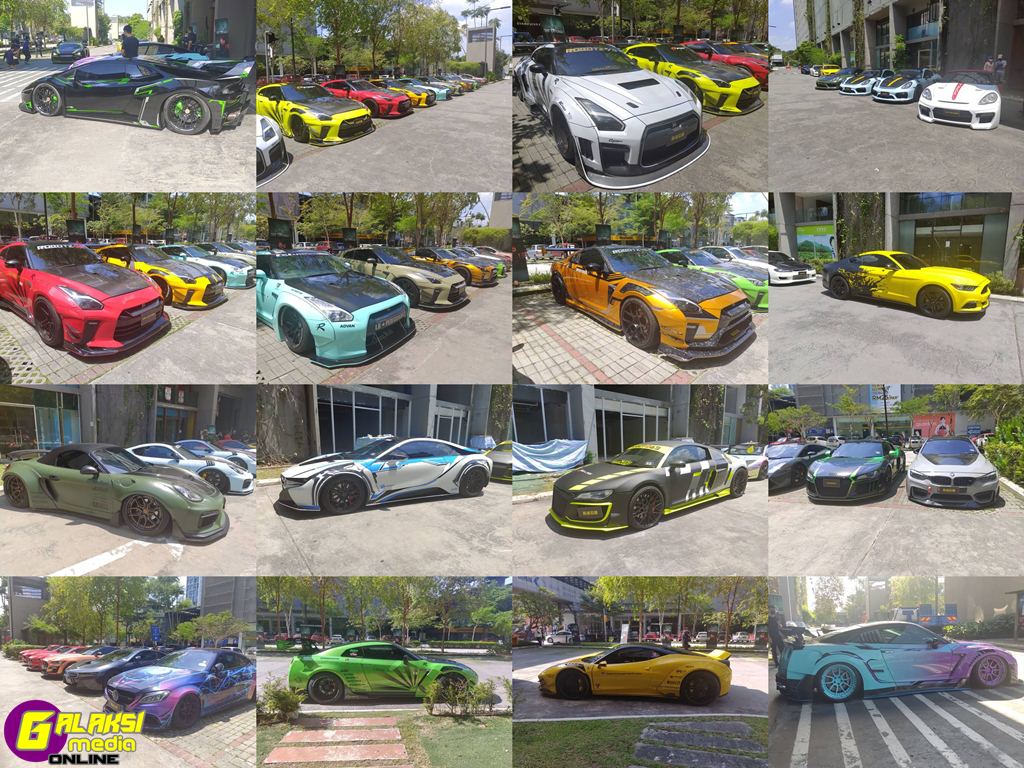 Joe Lim said, “In China, I realized that what we were doing on the track was having a catalytic influence on the market and the perception of cars in the country. With the introduction of entry-level FIA series and leading up to the top-level Formula 1 Grand Prix in Shanghai, the success of motorsports as a business model became quickly apparent, and it was at this point I saw the potential, as it had been from the start of the car industry, to lead the development of cars for the China market.”

With this in mind, the movie being the catalyst to incite interest in the development of motoring and the various motor sport industry, Joe Lim shares the idea of jointly developing 3 main sectors where he would provide advisory for the new branding called “Enhance’. They include :

1. The Enhance Zone located at Revo City. This is where conversions and modification on Motor Vehicles would be done. This would be located at OneCity Mall, near Subang Jaya.

2. The Enhance Station, which would be Modem EV charging stations that can also offer gas / petroleum products. The first would be in Cyberjaya, in line with its status as a Technology Hub to show support in the future of EVs industry in Malaysia.

3. The Enhance Automotive City, where there will be a racing & drag race tracks, including another Enhanced Zone for motor vehicle modifications. Hotel / Resort facilities would also be included. This is planned to be built / developed in Gurun, Kedah.

Thus, some of the scenes in the movie may be shot around this soon-to-be developed automotive-themed city that would be sited on a proposed 3,000 acre land, teamed-up with the Kedah state government’s investment arm, Invest Kedah Berhad.

Proposed to be located in Gurun, Kedah, the automotive-themed city would be a tourist hub for supercar enthusiasts to enhance and test their vehicles while marveling at other spectacular supercars. Apart from being a tourist hub, it also serves as a desired filming location for intemational patrons to shoot thrilling action-packed movies. The themed city will be the official filming location for future intemational TV series and feature films in relations to “The Catcher” franchise.

On the plus side, the strategic location of this themed city may allow for an efficient make-bulk & break-bulk international motor vehicle distribution and trading center. An application for a free trade zone status just like the Iskandar Regional Development Area (IRDA) down south in Johore would be submitted so as to also develop the potential North-Western Economic Development Hub that could create job opportunities and increased port activities for Malaysia’s Northern states.

The script for the movie is set to be finalized and casting will soon begin as well. Production for ‘The Catcher’ will commence in 2022 with expected completion in the year 2023 as the highest budgeted movie in Malaysian history.