(SEMASA) PUMA TRICKS RELEASED AHEAD OF 2014 FIFA WORLD CUP – With a Pink Right and Blue Left Boot, PUMA Tricks is Made for the Unbelievable 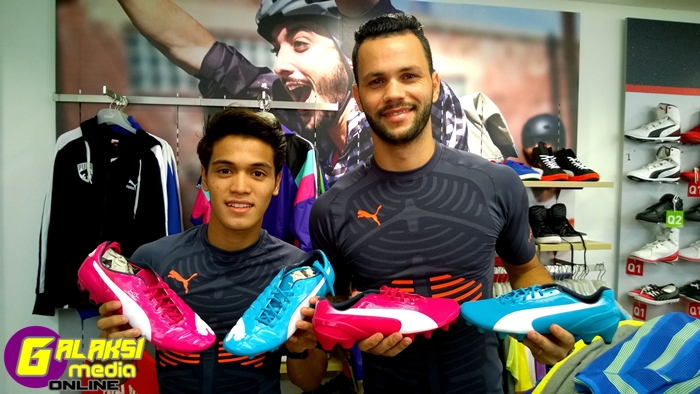 The right boot is pink, the left boot is blue. PUMA today revealed Tricks, a new colourful interpretation of its evoPOWER and evoSPEED football boots, made for the unbelievable at the 2014 FIFA World Cup in Brazil.

This amazing combination boots comes in both versions – evoPOWER and evoSPEED.

The evoPOWER boots are created specifically for midfielders and defenders due to the stability this boot can provide. Coupled with that soleplate is the super soft synthetic upper, that itself would probably feel pretty snug across the foot. But the addition of Accu-Foam really sets these into a new level comfort wise.

As for evoSPEED, it is designed for the comfort of players who play at a fast pace, mainly strikers such as Sergio ‘Kun’ Aguero (Manchester City and Argentina), Mario Gomez (Bayern Munich and Germany) and Oliver Giroud (Arsenal and France).

This boot comes with a combination of Griptex nodules and a leather-like grain printed into the upper add an exceptional sense of contact on the ball with any part of the foot,  the thin tongue supportive fit makes every touch assured.

The new PUMA ‘Tricks’ boots with its unusual look represents the unshakable confidence of players who wear them, and evoke their potential to do the unbelievable.

With its unique look, PUMA ‘Tricks’ is a key product element within the sport brand’s football marketing campaign ‘The Nature of Believing’ that places the power of belief right at the heart of the sport. Players who wear ‘Tricks’ strongly believe in themselves, and not only strive to stand out on the pitch but stand out forever and make history.

This is what Fadhli has to say about the new boots: “I am always happy to be on the pitch but with PUMA ‘Tricks’ it is going to be a new experience which will drive my confidence level to a  new high. I have always played with PUMA boots and enjoyed it so much. Now, I just can’t wait to put on PUMA ‘Tricks’ in the Super League.”

Mahali Jasuli speaks on his experience: “I am amazed with PUMA ‘Tricks’. The ball travels at a faster pace and accuracy each time I strike it, regardless whether I am trying to cross the ball and relay it to a teammate. I get so much satisfaction playing with PUMA ‘Tricks.”

Paulo Rangel, striker of Selangor FA was impressed with the new boots and said, “Not only does PUMA ‘Tricks’ look amazing, it comes in both evoPOWER and evoSPEED, catering to both types of players. Its colourway is a beauty, and a simply must-have by all PUMA fans out there.”

Goalkeeper Khairul, says: “It gives me a better feel during game time on the field. The ball also travels at a faster speed and with better control. The new color combination of these boots makes it even nicer. It stands out and it is one of the best boots I have ever tried on and to be honest, I believe that this new kit will give me the confidence to perform better.”

Midfielder Nasir says he is amazed at the performance level of PUMA ‘Tricks’ boots.

“As a midfielder, who plays such an intense game every week, I believe it’s a great feeling to be noticed from far and with this new pair of boots it will be pretty easy to identify who is the player. With this quality and confidence that PUMA has in creating a boot, I am happy to be associated with PUMA.”

The Puma ‘Tricks’ will go on sale across Malaysia, effective June 4. The PUMA ‘Tricks’ evoSPEED will be priced at RM549, while its evoPOWER will be on sale for RM619.

For further information please visit news.puma.com, where imagery, videos and further press materials can be downloaded.#startbelieving