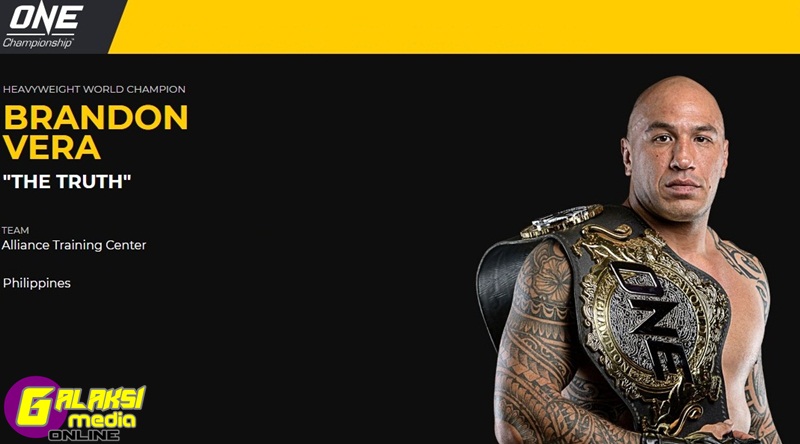 ONE Heavyweight World Champion Brandon “The Truth” Vera makes a run at his lifelong dream at ONE: CENTURY PART II on Sunday, 13 October.

The Manila-based athlete drops a division to take on Myanmar’s Aung La “The Burmese Python” N Sang for the latter’s ONE Light Heavyweight World Title in the main event at Tokyo’s Ryogoku Kokugikan.

Should he win, he would fulfill his goal of becoming a two-division World Champion.

“A [second] World Championship belt would put me in a different echelon that not many fighters in their lifetime ever get to accomplish, nor get close to doing,” the 42-year-old athlete shared.

“You’re basically getting to say that you’re the best in two divisions in the entire world when you have something like that.”

“Almost my entire martial arts career has been devoted to becoming a two-division champion – that’s how difficult it is to become one.”

Vera signed with ONE Championship in 2014 after a successful martial arts career that began in 2002 in the United States. There, he chalked up an impressive 12 wins.

In The Home Of Martial Arts, the Filipino warrior owns a perfect record. He finished all four of his opponents in the first round in a combined time of 8 minutes and 35 seconds.

But Vera knows that the storyline could differ against Aung La N Sang.

“I’m not always going for the knockout,” the Alliance Training Center standout said. “I’m just looking to finish the fight before the end of the fifth round.”

“I do not ever want the judges deciding whether or not I’ve won or lost, so one way or another, the fight has to finish.”

The heavyweight king also revealed that if he had it his way, he would not take on the Myanmar hero to complete his dream.

“It just happened that the best person in the world at light heavyweight is Mr. Aung La [N Sang],” he noted.

Will “The Truth” prevail on 13 October? Download the ONE Super App to find out.

Two World Title Bouts Booked For ONE: DAWN OF VALOR In Jakarta