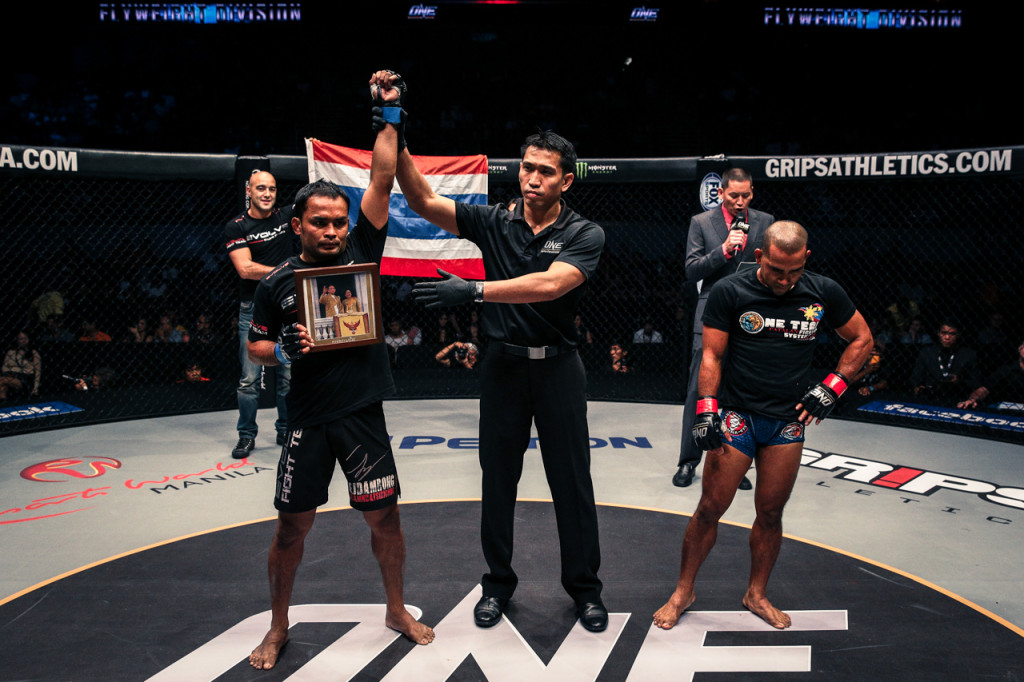 He approached his impending matchup with another man in the ring much like all men would when faced with the hard fact that, in just a few, short minutes, he would quite literally be in the fight of his life.

Professional fighting is a highly personal affair. Fighters put so much on the line when they step into the ring, into the cage, that it hits them in the core. So much goes into preparation for a fight, hours upon hours spent tiring away at the gym, personal time away from loved ones, entrenched in solitude.

They say fighting means discovering oneself, and for “Kru Rong” as he’s called in short, it’s always meant the world to him.

“Growing up wasn’t a smooth journey for me as my family wasn’t well off. My parents would have to travel to work in other parts of the country just to support the family,” said Dejdamrong, recalling his tough upbringing.

“To help ease my parents’ burden, I supported my family by competing in Muay Thai, hence the sport means a lot to me and my family.”

After making a name for himself and winning multiple titles in Muay Thai, Dejdamrong decided it was time for a different challenge, one that called for him to take it up a notch and try his hand at mixed martial arts. In 2014, Dejdamrong joined ONE Championship’s flyweight ranks and was easily a fighter to look out for.

Dejdamrong added that besides the challenge offered by MMA, his move to Singapore to be part of the Evolve MMA team and training alongside other world champions made him fall in love with MMA even more.

Because of an impressive pedigree obtained throughout his Muay Thai career, all eyes were on Dejdamrong as he made his debut inside the ONE cage. Much was expected from the 36-year old Thai.

When asked about his debut fight with ONE last year, Dejdamrong said, “I was really excited to show the world how much I have diversified as a fighter after training with the team at Evolve. I was mentally prepared and went out strong with my team backing me.

“My debut with ONE is definitely one of the most memorable fights in my life.”

After going unbeaten in his first four fights for the promotion, with two wins by submission and two by devastating knockout, Dejdamrong is up for a new challenge.

On May 22, at the Singapore Indoor Stadium in Singapore, he steps back into the ONE cage, this time, to fight for a world championship.

“I am very excited to be back again with ONE to now fight for a title.,” he said.

With ONE’s flyweight division stacked, and ONE Flyweight World Champion Adriano “Mikinho” Moraes reigning supreme, Dejdamrong realized an opportunity was present at strawweight. Dropping down to 115 lbs., Dejdamrong makes his debut in ONE’s lightest weight division in a title fight.

Like Dejdamrong, Doliguez originated from a different combat sport and has enjoyed relative success since transitioning to mixed martial arts. Doliguez stands at six wins, with only one loss inside the MMA cage.

More than a title however, is the prestige a world title brings to Dejdamrong’s family and his country.

“Of course, this wouldn’t have been possible without the guidance of all my other team-mates on the Evolve Fight Team.”

If Dejdamrong comes prepared for his ONE world title shot like he had in his first four fights with the promotion, his opponent is in serious trouble.