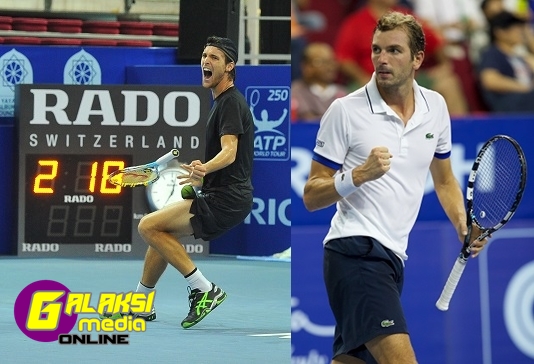 The 2014 Malaysian Open, Kuala Lumpur will play host to the best line up of players in its young history. To be played at Putra Stadium, Bukit Jalil, September 20 to 28, the US$1,022,255 event will feature stars from at least 16 different nations as highlighted by the direct entry field released today by the ATP World Tour.

The tournament has a very high cut-off at 58 and well exceeds the world average for number of top 16 players at a 250 level event. The 2014 Malaysian Open, Kuala Lumpur has four players ranked in the world’s top 16 and is among the top 12% of the 34 tournaments that make up the 250 level on the ATP World Tour.

The Malaysian Open, Kuala Lumpur has already been thrilled to announce the top four players heading to the capital – Milos Raonic, Juan Martin Del Potro, Kei Nishikori and Ernests Gulbis. All four players have been ranked in the world’s top ten this year and all received commemorative trophies from the CEO and Chairman of the ATP World Tour, Chris Kermode.

The tournament has also been excited to announce the debut of 19 year old Aussie Nick Kyrgios who saw his world ranking power up to a career high 65 following his amazing run at Wimbledon. The teenager will be joined by his Malaysian mother in KL and they will host a “Town Hall Meeting” on the Wednesday evening on-site at Putra Stadium. Local fans are excited about seeing him in action and he will play on the Monday or Tuesday and will also team up with a local player in the doubles.

The tournament is very happy to welcome back defending champion Joao Sousa from Portugal. It was his maiden title which allowed him to break through into the world’s top 50 for the first time and since then he has made a steady climb up the rankings. In the final he defeated Julien Benneteau; the Frenchman has reached the Malaysian Open final the last two years. Maybe 2014 will be third time lucky for him when he returns as he tries to win his first career title.

“This year’s entry list has served up a tantalising mix of the brightest top-ten stars, our two finalists from last year, future top-tenners and our 1/2 Kampung kid, with many fresh faces, who will all combine to produce a tournament worthy of Visit Malaysia year 2014,” said Tournament Director Nick Freyer, of organisers IMG.

Argentina, Spain and Austria each have two players in the field which is more than any other nation. Joining Del Potro for Argentina will be Leo Mayer with Spain being represented by Pablo Andujar and Marcel Granollers who has been a doubles champion at the ATP World Tour Finals and a finalist at this year’s French Open doubles.

Austrian tennis is on a rebound and the tournament is very pleased to welcome one of that nation’s best-ever players Jurgen Melzer who reached a career high ranking of eight and has been a Grand Slam doubles champion. Joining him is one of the future stars of men’s tennis, Dominic Thiem. The 20 year old recently reached his first ever final at Kitzbuhel.

World No.17 South African Kevin Anderson is having the best results in his career and armed with one of the most ferocious serves in tennis returns for the first time since 2010 and is joined by KL debutante, the “Flying Finn”, Jarkko Nieminen who has wins over Raonic, Del Potro and Andre Agassi.

So strong is the cut-off that Australians Bernard Tomic and Marinko Matosevic might have to play qualifying to get into the main draw. Tomic would be making his third appearance this year. He started the season by reaching the final in Sydney and just recently won his second career title when he beat Ivo Karlovic in the Bogota final, while Matosevic, one of the big characters in tennis, is enjoying the best year of his career.

The final draw of 28 will be made up of 19 direct entries, two special exempts, three wild cards and four qualifiers. The three main draw singles wild cards and a doubles main draw wild card pairing will be confirmed in the coming weeks.  The singles winner will earn US$ 165,000.

In addition to the doubles pairing of a local player with Kyrgios, an additional three Malaysian qualifier singles wild cards, as determined by the Lawn Tennis Association of Malaysia, will be announced later.