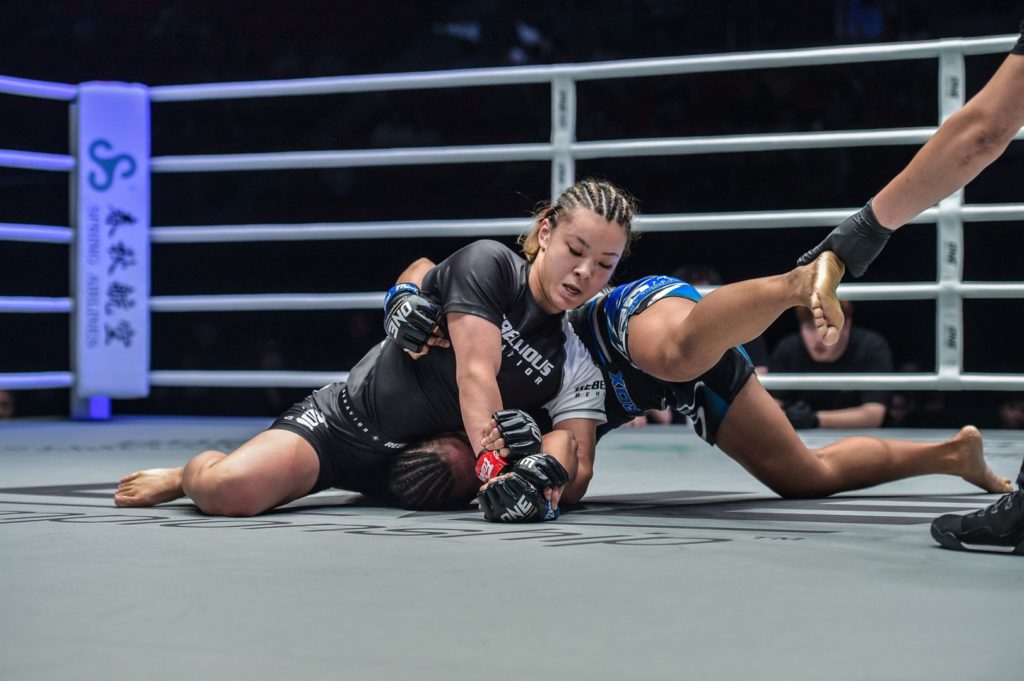 Itsuki “Strong Heart Fighter” Hirata’s debut win in ONE Champion was impressive enough, but the young Japanese star vows to up her performance when she returns to action against Rika “Tiny Doll” Ishige at ONE: CENTURY PART I on Sunday, 13 October.

Hirata secured a commanding win in June this year over Filipina warrior Angelie “D Explorer” Sabanal by Americana at the 2:59 mark of the first round.

That win brought her record to a perfect four finishes out of four bouts, and it gave “Strong Heart Fighter” new hunger to compete at The Home of Martial Arts.

“I wasn’t nervous at all – I enjoyed it. I’ve always enjoyed competing, and I never really get nervous. I’m always looking forward to the next one,” she said.

“Angelie Sabanal has a Muay Thai base and specializes in striking. I thought about striking with her, but I caught her foot and got the takedown, so I was okay with that.”

“Right after the fight, I started training and preparing for this next one,” the Japanese athlete added.

The K-Clann judoka clearly cannot wait for ONE’s 100th live event to unfold and promises fans they can expect a newer version of herself.

Hirata is aware of Ishige’s experience and strength but believes she has worked hard on one of her biggest weakness in her martial arts arsenal.

“I’ve been weight training three times a week to get bigger,” the 20-year-old martial artist said. “And, as usual, I’ve been working on my striking and ground game. [She] is a good grappler, so I’ve been training for constant scrambles on the ground.”

Though she is strengthening her ground game, “Strong Heart Fighter” wants to keep this contest standing up.

However, should an opportunity for a submission arise, the Japanese athlete will not think twice to grab her fifth finish.

“I want to show my striking. I’ve been focusing on that and ground and pound. Before my last match, I said the same thing. But in the end, it went to the ground, so this time my main aim is striking,” Hirata stressed.

“This time I want everyone to see me finish by KO in the first round. I’m bringing in a new era.”

The action happens at the famous Ryogoku Kokugikan on 13 October in Tokyo, Japan.

Brandon Vera Won’t Accept Anything But A Finish At ONE: CENTURY

Spread the love
Tweet
Tags: Itsuki Hirata, Japanese Fans, ONE CHAMPIONS, Promises A Knockout Treat For
← (SUKAN)  How Budo Will Empower Yushin Okami At ONE: CENTURY
(SUKAN)  ‘Ant Man’ Itching For Another Shot On The Global Stage →