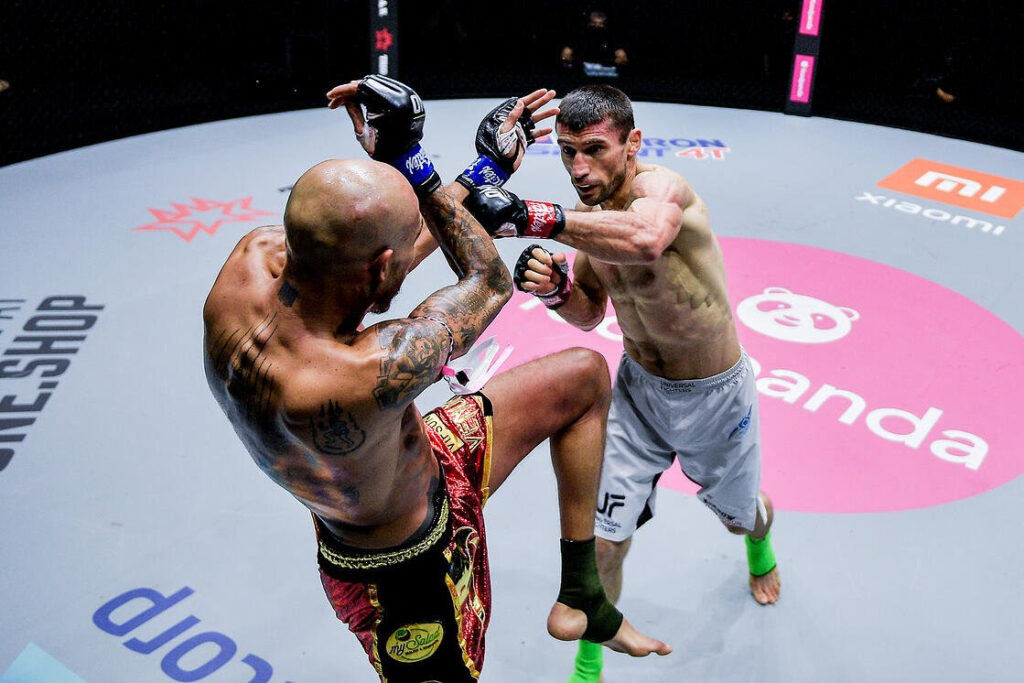 25 December 2020 – Singapore: The largest global sports media property in Asian history, ONE Championship™ (ONE), returned to the Singapore Indoor Stadium for the promotion’s final event of 2020. ONE: COLLISION COURSE II, a previously recorded event broadcast globally on Friday, 25 December, featured a series of impressive performances in the Circle from the world’s top mixed martial artists and Muay Thai stars.

Yusupov employed a laser-like straight left that hammered Sana’s chin throughout the action-packed bout. In the second round, one of those explosive left hands sent Sana crashing to the canvas as the referee administered the mandatory count. The French-Algerian tried to turn up the pressure in the third stanza and swing the momentum in his favor, but Yusupov kept his composure and continued his unrelenting onslaught.

In the end, all three judges scored the bout for Yusupov, who earned the nod behind an impressive display of power and technique.

In the co-main event, former ONE Flyweight World Champion Kairat “The Kazakh” Akhmetov of Kazakhstan turned in a masterful performance, dominating “Ottogi” Dae Hwan Kim of South Korea across three rounds to earn a convincing unanimous decision. Akhmetov put on a striking clinic, pouncing on his opponent with a healthy dose of looping hooks and debilitating kicks that connected with power and precision. Kim tried his best to counter, but he lagged behind throughout the bout. In the end, Akhmetov’s complete showcase of skills was more than enough to clinch the victory on the scorecards.

A ONE Super Series Muay Thai showdown between WBC Muay Thai Champion Momotaro of Japan and former ONE World Title challenger Walter Goncalves of Brazil ended abruptly when Goncalves suffered a leg injury in the second round that forced him to bow out of the contest. In round one, Goncalves attacked with a steady torrent of thudding kicks that kept the Japanese fighter on the defensive. In round two, however, the Brazlian appeared to tweak his knee when a kick made contact with Momotaro, who earned the TKO.

For a full bout recap of Momotaro vs. Walter Goncalves, click here:
https://www.onefc.com/news/momotaro-stops-walter-goncalves-with-second-round-tko/

In a heated three-round battle between talented lightweight mixed martial artists, South Korea’s “Crazy Dog” Dae Sung Park edged out Singapore’s Amir Khan to earn a narrow split decision on the scorecards. Khan played the role of aggressor for the duration of the bout, connecting on pinpoint striking combinations from range, while Park owned the wrestling and grappling exchanges. A strong third round from Park turned the tide, and in the end, the South Korean’s success on the mat was enough to convince the judges.

Highly regarded Russian welterweight Raimond Magomedaliev made quick work of Brazil’s Edson Marques to win by devastating knockout in the first round. Magomedaliev began the contest attacking Marques’ legs with low kicks and feints to slow his movements. Once Magomedaliev had Marques backed up against the Circle Wall, a thunderous right cross sent the previously undefeated Brazilian to the canvas for good, as the referee called a halt to the contest.

It was an action-packed affair between Japan’s Senzo Ikeda and China’s “The Little Monster” Liang Hui to start the evening. Both men tested each other’s chins with explosive strikes, with neither wanting to back down. Liang brandished a tremendous overhand right paired with a sharp left hook that had Ikeda reeling throughout the contest. Meanwhile, Ikeda employed a piston-like left jab that nearly shut Liang’s right eye, as well as a robust ground game that undoubtedly swayed the decision in his favor. In the end, all three judges scored the bout for Ikeda.